In a world where experimental electronic music exponentially splinters into a multitude of rogue genres that slowly shuffle the globe from demilitarized dance floors to sleeper cell bedroom studios and back, a team of disparate scientists tracks this solanum-like pandemic while desperately trying to interpret cryptic field recordings of Samhain’s past, not one day at a time, but from Amen to Zombie…
First post of 2011 and it’s going to be a good one.  Couple of follow-up items.  As I said in the last post, Code 3’s output would be scant at best, but I just saw somewhere that they’ve got something coming up.  Who knows, we could see another Magnetic Man-type blow up in the mainstream music press.  Fingers crossed.
In other news, I attended my first BRRRN of 2011 at the B Side in Coventry here in Cleveland.  I highly recommend checking out whoever’s got that sweet spot starting ’round 11:40 p.m. if you’re kicking it on a Monday.  I got to see the crazy kids dance their asses off with white-boy footwork and candy raver vigor.  It was a good sign for the new year that people are out to have fun and not give a shit about the chubby scenesters swilling PBR and throwing ‘tude at the dance floor.  Actually, that’s a bit unfair.  I only saw a little of that going on; most everyone was down with the par and the tay.  Anyway, it got my juices flowing on bass music again.  Some guy was playing some aqua boogie, or what-ever-the-fuck you want to call it and it blew me away.  When you consume so much music, it puts you off of it to the point where all you want to listen to is comedy podcasts or The Best Show on WFMU archives.  Speaking of which, we’ve got sort of a triple scoop of double chocolate boo-ya for that ass.  Let’s get it on:
ZOMBIE 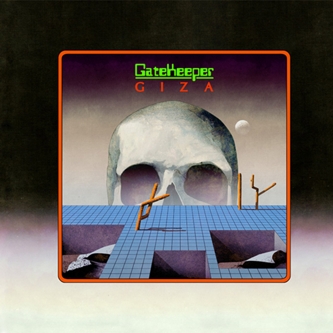 Boom!  Check that shit out.  That could be the new design for a pack of cigarettes that gives you a punch in the face with every puff of cancer, and I’d still want to buy it.  Fortunately, that is the latest offering from Chicago’s Gatekeeper.  Now, I’ve only strayed from the format of reviewing Halloween Spooky Sounds CDs once in a haunted blue moon, but this absolutely deserves a mention.  And we’ll get to that shortly.
Before we get to the music, I have to admit that what drew me in is that awesome artwork on the cover. Dan McPharlin is in charge of the surrealist landscape there.  His style is more in the Sci-Fi vein, but it’s still awesome if you dig Roger Dean Yes album covers and smoking weed under a black light.  Dan is pretty handy with a Moog too.  Check out all of his stuff.  Oh, and “In space… no one can hear you scream!”*
Now, on to the album Giza.  I would rather you just listen to the sample there, but if you need more of a teaser, here it goes: In the vein of classic prog-rock icons Goblin, with nods to John Carpenter, and a heavy use of disemboweled YouTube clips, this album still feels at home in any Electro set.  There, now go buy it.
Thirdly, we continue on to: 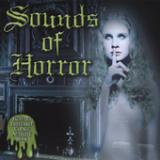 Here, we have a Spooky Sounds Erector set of a CD.  I won’t bother listing all the titles, but they’re all the standard Halloween folly you’d expect.  Wind, chains, doors slamming.  On second thought, now that I’m actually reading the titles to the sound clips, they’re pretty funny.  “Telephone Call Hang Up,” “Flesh Squishing And Eating,” “Slow Walk With Limp In Echo.”  I guess they must be translated from German.  Anyway, the CD is a collection of sounds that you might use to create your own Halloween ghost story or what-have-you.  But, where most collections like this fail, the good folk at Allegro Corporations shine through.
What I’m referring to is the all-important “Eerie Music” or “Haunting Music” tracks that should appear on these types of CDs.  Here’s the idea: First, you’ll want to write out your Halloween-type scary story, get all the parts down, and name your characters.  Then, you’ll go through and pick out the sound effects that you’ll use to punctuate your story (the howling wind and rain to start out with, a good ghost’s voice when your characters make it to the attic of the haunted house…you get the idea).  Now, the only thing stopping you from sounding like a jerk who can’t write decent exposition for a ghost story is going to be that “Eerie Music” that is not full of crazy sound effects, but still appropriate for a ghost story.  It will serve as your bed music.
Usually, you’ll get one tacked on the end of the CD, or maybe two hugging the label if you’re into vinyl.  Most of the time, they suck for the purposes stated above, but they are pretty cool on their own.  Not on this disc.  You get “Eerie Music” that would easily pass for a B-side to Pink Floyd’s soundtrack to More, and would also work well as bed music for your scary story.  “Scary Music With Demented Laugher” is more of an opening piece with classic Theremin Sci-Fi stabs; “Suspense Music” features chugging contrabass, harpsichord strings, and a droning pipe organ; and “Midnite In Graveyard With Clock Chime” is not necessarily a piece of music, but a good chunk of folly.
Do I expect anyone to actually use these CDs as source material for creating their own Halloween scary story production?  Maybe just a little, but the Allegro Corporation certainly does.  They’ve even included a 15-page Halloween activity PDF complete with mazes, crosswords, and an awesome devil mask that you can cut out and wear.  Their catalog is what you’d expect from a company that has to put “File Under: Halloween” on a disc titled “Sounds Of Horror.”  They’ve got other Halloween Spooky Sounds CDs in their catalog that are worth checking out.  I think I’ve got the rest of them (bought all three in one shot at a drug store).  They’ve also got a CD in their catalog called “Kid’s Pain Relief Project: Come What May.”  This CD was recorded by the Kung Fu Bakery in Portland, OR, and includes songs like “Tidepool” and “Xandria.”  I’m not sure if this is the most hilarious thing ever recorded or something you can’t un-hear,  but it easily surpasses the sphere of influence Allegro has for a $1.99 CD called “Sounds of Horror.”
Goodnight out there, whatever you are.
* That’s totally from Alien. Ca-kow!