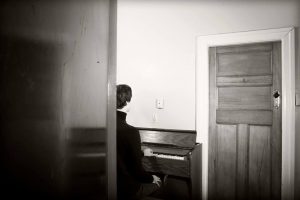 Jonathan Bree is a composer, multi- instrumentalist and producer from New Zealand. A self-confessed workaholic and social recluse, Jonathan spends his days (and nights) in a dingy home office attempting to run his record label Lil’ Chief Records (who have put out albums by the likes of The Ruby Suns and his previous band The Brunettes) whilst simultaneously producing albums for artists and somehow finding time to record his own material when he should be sleeping.
A Little Night Music is the second solo album by Bree. Whereas the Brunettes were a more bubblegum Nancy & Lee, Bree’s solo material is darker, more sinister material influenced by orchestral pop from the ’60s.
Bree ventures into more free-form territory here, further breaking away from traditional pop formulas–partially because of an interest in classical music born after he inherited some old Tchaikovsky ballet and Bela Bartok albums.
The album features orchestral and jazz drumming, the celeste, a pianist, a string quartet and New Zealand soprano Ella Smith alongside Bree’s trademark McCartney-esque basslines and what he refers to as “a light smattering of guitar”. The second half of the album gets more fantastically bizarre; “Tear Your Face Off” sounds kind of like a more hi-fi Ariel Pink doing ’60s lounge (’80s meets ’60s?) and closer “There is Sadness” approaches the vibe of a finale act from a cabaret musical.
Lynchian tracks “Murder” and “Weird Hardcore” bridge the gap between the more pleasant orchestral arrangements on the first half of the album and its stranger second side.
Thematically speaking, Bree has moved away from the at-times-uncomfortably-honest “Woe is me–I’m a white male in my 30s” themes found on his first solo album The Primrose Path to an array of interesting subject material including Drones (“Drones and Satellites”), Hating Narcissistic Young People (“There is Sadness”), Feeling Like A Tool In The Music Industry (“Tear Your Face Off”), New Zealanders and Their Xenophobic Racism (“Murder”), & Weird Hardcore (“Weird Hardcore”). “Blur” is a lighter pop moment on the album; a straight up catchy love song inspired by a cheesy line delivered by the charmingly perverted character Adam from “Girls” (Season 3, Episode 4 – “If you died, the world would blur,” he tells Hannah). “Once It Was Nice” and “Time Will Tell” echo similar themes found on “The Primrose Path” – with Bree airing melancholic yet sentimental anxieties about the future of love.
Today, Ghettoblaster has the pleasure of streaming the album, which you can enjoy below: