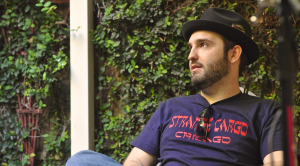 Philly-based emcee/producer, Zilla Rocca may not be known in every rap circle, but it’s only a matter of time until his name rings bells. Alongside his band, The Shadowboxers, he’s managed to develop his notoriety as a rap-noir artist– a skill that’s assisted him in the creation of a catalog of over twenty titles, and countless remixes.
Taking on Guilty Simpson and Small Professor’s “Go,” featuring both Elucid and Castle, which first appeared on the duos collaborative Highway Robbery project, Rocca adds a new layer of depth to the track, by adding his signature hardboiled production savvy to create an elaborate remix that changes in its entirety, for each verse.
For more hard hitting, innovative remixes, make sure to check out Coalmine Records’ January 20 release of Remineded: A Collection of New & Old Remixes. The ten track remix compilation features everyone from Blu, Royce da 5’9″, Heltah Skeltah and Kool G Rap, and includes remixes from the likes of Large Professor, Diamond D, Cookin’ Soul, M-Phazes, Audible Doctor, and more, and is now available for pre-order through iTunes!
Stream the remix here: