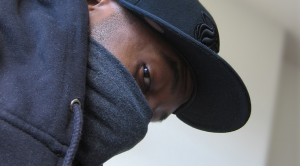 Never one to compromise quality over quantity, Miami artist SKAM2? has purposely kept a low profile in the booth as of late, so when his rhymes do surface, the outcome is acclaimed. Known for trading bars with Eminem, with DJ Spinna at the helm, SKAM has proved boldly that he can rock with the best of ’em. While his peers have continued to pursue their respective crafts, SKAM2? mastered his artistic talents, becoming one of the most sought after illustrators in the industry, providing iconic artwork for the aforementioned Detroit rapper, as well creating the album art for A Tribe Called Quest’s, Beats, Rhymes & Life, in addition to having earned countless other artistic accolades.
With the February 12 release of his upcoming project, The Skronik: Flying Monkey Murder Cirkus, SKAM goes back to the genre’s core concepts on the aptly titled “Definition.” No preaching. No overproduced hype. Just some serious bars with M1 riding shotgun, and DJ Immortal on the cut. SKAM2? gets back to basics on the West Coast inspired banger produced by Infamous. If you or someone you know has some misconceptions of what Hip-Hop is, show them the “Definition” and teach them a lesson.