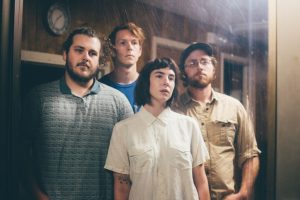 The group kicks off their first ever national tour with shows supporting of Montreal, followed by headlining dates throughout the Northeast, performances for Communion and a hometown show with Unknown Mortal Orchestra.
In a press releases, Leschper writes, “‘No Crying in Baseball’ feels like a small, personal victory. Over the course of several months, I tried to make sense of it, stabbing in the dark at indistinct ideas of it, finding that in order to bring it to fruition I would have to first cut my teeth on other songs. In my mind, it represents a tangible shift towards a sharper, more unapologetic embracement of discovering fortitude in hypersensitivity. At first glance it is brash and accusatory, but stripped to its undergarments it really is a testament to vulnerability. It’s about how entirely possible it is to be soft and subtle and simultaneously aggressively forceful. The song was the culminating result of an infinite spectrum of frustrations and doubts regarding my internal drive and work ethic vs. those around me – specifically the fear that no one is trying hard enough, not even me.”
Mothers are set to release their debut album in 2016. Produced by Drew Vandenberg (Of Montreal, Deerhunter and Porcelain), the upcoming LP features collaborations with Josh McKay (Deerhunter) on vibraphone and McKendrick Bearden (Grand Vapids), who plays bass and provided string arrangements throughout.