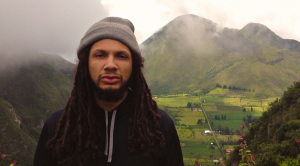 Although scholars have debated the actual birthdate of JC, capitalist Americans have conveniently pinned that date to December 25. But don’t wish the New Jersey native and now Harlem resident Kyle Rapps a Merry Christmas, he simply doesn’t believe in that stuff.
And if you were to look back at his checkered childhood, along with the life he currently leads, I don’t think his Frank Cross like similarities would be of any surprise. The production on “Don’t Try,” which comes courtesy of NYC’s Pan, is brimming with nostalgia, as Rapps takes you back to the days of pretending to understand Liquid Swords and watching the Knicks lose on MSG. Some things don’t change…at least he observes one Christmas tradition for many Americas — indulging in Chinese food. So instead of heading to the mall for the year end sales, take a trip down memory lane with Kyle Rapps, and have yourself a happy new year, ya filthy animal!