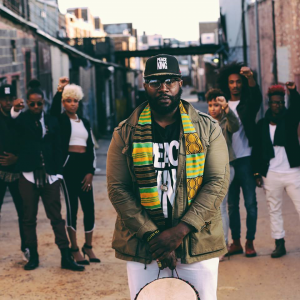 By Kyle Eustice
Emcee/poet/educator Karega Bailey’s cross-country move from D.C. to Oakland is officially complete. Now as the Director and Special Education/Performing Arts Coordinator of Roses in Concrete Community School, he’s holding his ground as a staunch preservationist of hip-hop culture, as well. Bailey caught the attention of Public Enemy’s Chuck D in 2012 while they were both attending a conference in Atlanta and has continued his mission to educate future generations.
Bailey’s latest video for “Last Kut” features a cameo from emcee Real T@lk, who Andre 3000 once called a “lyrical scientist.” The video shows Bailey and friends kicking it at the barber shop dressed to the 9s as they spit nothing but solid gold verses.
“You only funky as your last kut is a reminder the work ethic and desire it took to get you there must be maintained to remain there,” Bailey explains. “And even then, no one remains ‘the one’ forever. Your last kut isn’t only a product of your work ethic and desire, it also includes what type of content you ingest that contributes to your output.”
Inspired by Outkast’s “Rosa Parks,” the song features vocals from Brittany Tanner, direction from Bug Spray and production from Grap Luva/Roach Motel Films. “Last Kut” is a little bit A Tribe Called Quest, but overall another powerful statement set to a flawless soundtrack everybody should have.
Check out the video here: https://www.youtube.com/watch?v=Ngf13ioYp9M