JMSN announced the premiere of his brand new video for “Addicted” via Wonderland, be sure to catch him on his North American tour that begins this week in Santa Barbara.
Born in Detroit, and currently residing in Los Angeles, JMSN (born Christian Berishaj), is an American singer-songwriter, multi-instrumentalist, producer, engineer, mixer, and videographer. The R&B crooner, who released his debut album †Priscilla† in January 2012, also operates his indie label, White Room Records, out of his home studio. The success of his freshman album captured the attention of platinum-selling artist Usher and even landed JMSN four slots on Kendrick Lamar’s groundbreaking Good Kid, M.A.A.D City album (Bitch Don’t Kill My Vibe, The Art Of Peer Pressure, Sing About Me/Dying Of Thirst, Real).
JMSN’s impressive talents have allowed him to collaborate with the likes of Game, J. Cole, Tyga, Ab-Soul, Kaytranada, Sango, and others. The songster has unveiled the next chapter of his musical journey via his recent self-titled LP, which was released on December 9, 2014 via White Room Records.
Watch “Addicted” Video On Wonderland 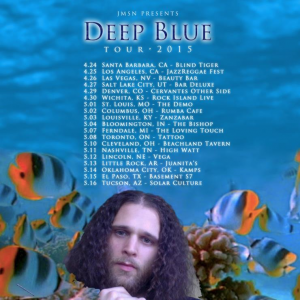