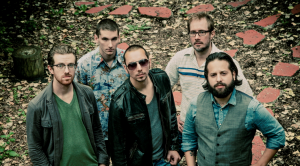 The Queens, New York based musical force, known as Hollis Brown, are pleased to share the album stream for their fourth studio LP, 3 Shots. At eleven tracks, the LP showcases the group’s creative progression, and deeply expressive songwriting, from the once unpretentious garage quintet.
Including features from the likes of songstress, Nikki Lane, along with the fabled Rock ‘n’ Roll pioneer, Bo Didley, the group named after Bob Dylan’s “Ballad of Hollis Brown,” expand into a rather ambitious new territory, in what can be accurately portrayed as their musical milestone.
“We wanted a bigger drum sound, bigger guitars and a bigger record in general,” states Mike Montali, the group’s lead singer, and guitarist. So without further adieu, give their latest effort a spin, and be sure to check out the album’s debut visuals for “Sweet Tooth,” below.
And for those that would like to catch the Queen’s boys on tour, be sure to head over to their website, and check out the dates for their three month national tour, with the Counting Crows: http://www.hollisbrown.com/#!tour-dates/ch8j

“Sweet Tooth” (Official Video):
“Sweet Tooth” serves as the 3 Shots visual debut, which paints the backdrop for the hustle and vibrant living life in NYC. The track, which is directed by Manuel S. Umo, poetically details the protocol for scoring from your local pusher man: “Out on the corner, money in my hand, I place my order, to my good friend/ Now I’m waiting for him, just to get by” — or is it, “get high.” Either way, hit the play button, and keep this video handy for the next time you have a ‘sweet tooth.’