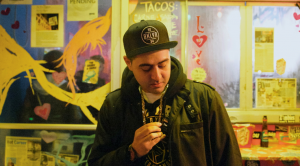 In lieu of the one year anniversary of Coalmine Records’ decennary compilation album, Unearthed, mixed by DJ Revolution, the Brooklyn-based indie is pleased to present the J57 Remix of the El Da Sensei featured favorite, “Show Stoppa,” which boasts Sweden’s DJ Devastate and Young Pacino on the hook duties, over J’s head nodding remix. To further celebrate the milestone, Coalmine’s pleased to release a limited edition run of Unearthed on cassette. Dubbed the ‘Green Slimes’ for being pressed on green shells, the hour long mix serves as a who’s who of today’s independent Hip-Hop scene, packed with features from both veteran and burgeoning emcees such as Pharoahe Monch, Kool G Rap, Large Professor, The Artifacts, Blu, Sean Price, Billy Danze (of M.O.P.), Big Noyd, One Dae, Skillz, Guilty Simpson, Rah DIgga, Maffew Ragazino, El Da Sensei, and Fashawn, among others. Producers tapped include Diamond D, Nottz, Ayatollah, Marco Polo, Khrysis, along with the Grammy Award Winning, M-Phazes, among others.