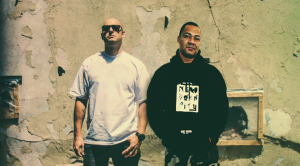 By Kyle Eustice
When it comes to Hip-Hop, there’s something special about a project crafted by a duo. They’re typically tighter listens with a sharp focus and sense of cohesion. Those qualities are apparent throughout the latest EP from Dirt Disciples, aka the New York tag-team of rapper Rome Clientel and producer DJ Concept.
Their new project, The Ambition EP, proves the old adage of “less is more” true on multiple levels, because these two know you don’t need an hour’s worth of content to get a point across. You may have already known that if you heard their ill self-titled 2014 EP, and they’re not shying away from the short-but-dope approach on here. The EP’s seven tracks glide by with ease, making for a listen that’s equally smooth and rugged. That goes for when Rome’s alone on the mic, particularly on standout “Rosetta Stone,” or joined by fellow underground bruisers like Torae, Chuuwee, and Rick Gonzalez (the latter two appear on single “Life is Good”).
The Ambition EP is Hip-Hop in its purest form, from Rome’s confident and refined rhymes to Concept’s dusty and looping instrumentals. Here’s hoping they’ll keep their yearly releases going into 2016, because they’re only getting better with age.