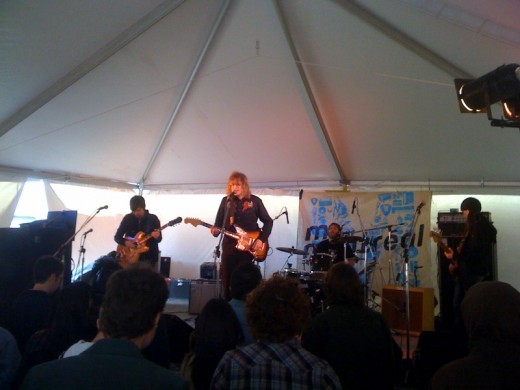 The Besnard Lakes at SXSW 2010

The Besnard Lakes were one of the few bands at which I forgot I was at a festival. On a day that felt miserably cold to an unsuspecting crowd that had just the previous day been in shorts and sandals, the Canadian Besnard Lakes joked that they brought a bit of their homeland with them, and it couldn’t help but feel like we were watching them perform on some windy clifftop. That felt pretty right as the band tore into a spiritual set culled from its three albums. As those albums feel whittled to perfection, so went the performance, spilling waves of guitars over Jace Lasek’s and Olga Goreas’ spectral voices in the heavy psychedelia of “Devastation.” Drummer Kevin Laing especially proved himself an asset onstage, offering steady grooves that burst into dramatic accents and syncopation. And “Albatross,” off the band’s recently released The Besnard Lakes Are the Roaring Night, couldn’t have sounded better, with Goreas’ weary voice pleading soulfully while her husband Lasek cooed high above her until the band broke into an ecstatic noise break. It was the kind of thing that reminds you of what the point of this festival is.

The Besnard Lakes at SXSW 2010

I’m sorry, a little too hacky-sack for me.

I do not remember this.

Uf! I love the Drums‘ debut EP as much as anyone, but the huge backyard of Stubb’s was possibly the worst setting for this band, which just doesn’t seem ready to bring its jangly surf rock to that large a crowd. “I Feel Stupid” was endearingly out-of-tune on record; live, it just sounded like, oops we can’t sing. Mindlessly brilliant three-chord prance-along “Let’s Go Surfing” doesn’t need much to get going, but it just wasn’t happening.

Perez Hilton’s SXSW bash ended with the second major performance by Hole of the weekend, and, maybe it was just me, but damn if it wasn’t a whole lot of fun. Yes, it’s just Courtney Love and some other people; yes, she still sounds busted as hell; yeah, the songs from “America’s Sweetheart” still aren’t very good. But, every song from Live Through This sounded amazing, from “Violet” to “Doll Parts” to (!) “Miss World.” The new songs were harder to decipher due to it being really fucking loud and Love’s inability to sing very clearly at the show, but “Samantha,” perhaps the highest-profile of her new tunes (the one where she sings “people like you fuck people like me to avoid suffering”), felt as immediately engraved into our memories as any of her classics.