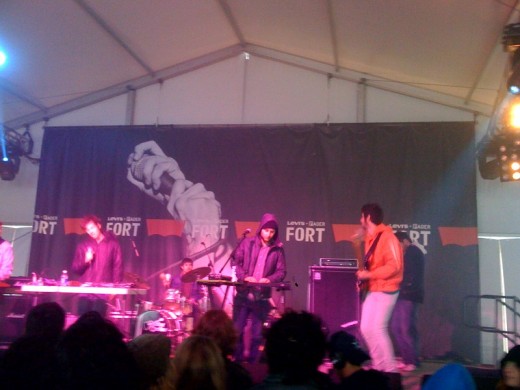 “Sylvia” by The Antlers was the best song I saw performed at SXSW. That should come as no surprise, really, considering how epic the song is, but as the opening song in the set of a band not exactly known for loud, attention-calling music, it was gutsy. However, while the rest of The Antlers’ set didn’t live up to that first spine-shivering moment, when frontman Peter Silberman’s voice stretched beyond the considerable lengths it does on the album Hospice, the band was definitely louder and more interesting to see live than I expected, drumming up plenty of electronic noise to fill out the space created in its dark lullabies.

Abe Vigoda put on a brilliant set of mostly new tunes that feature more keyboard and tunefulness than in previous outings, but with the same manic power that has drawn them a growing following. Particularly engaging was new song “Pure Violence,” which, despite its name, dials down the atonal guitar interplay to focus on straight-ahead rush, as well as graceful instrumental sections that build off the momentum of last year’s exquisite Reviver EP.

Bits and pieces of bands here and there, but the next memorable set I saw came from Memory Tapes. Memory Tapes’ blissed-out, stratospheric dance music gets a new-wave boost live, sounding like New Order’s offspring. While embracing trance and house beats, Memory Tapes main man Dayve Hawk is still very aware of the power of a solid bassline, not to mention some surprisingly sweet riffage. Quite fittingly, another one-man chillwave band, Washed Out, followed with a set that deftly built from Ernest Greene enthusiastically moaning into a mic and dancing while synths sort of played themselves to a luminescent full-band set with (also great) chillwave band Small Black playing backup. For a sound based on hazy, unremembered nostalgia of ’80s new wave and hip-hop (how old is Greene, like, 20?), Washed Out sounded very much alive and current both times I saw them at South By, boosted by an energetic frontman too charming to hide behind a torrent of reverb forever.