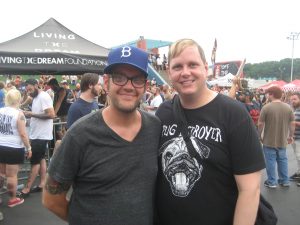 I guess it’s time for me to face the simple truth that I’m no longer living in the ‘90s anymore.  A day on my feet, in the sun, with loud music at every turn, and surrounded by teens in various stages of dress (pot leaf  knee high socks, tank tops pulled from the shelves of Hot Topic, combat boots, flip-flops and chucks, and one gentlemen dressed as Waldo, ala Where’s Waldo) and undress (if you are under 18, please put those things away) doesn’t trip the trigger of a 36-year-old curmudgeon the way they once did.
So why in the world would I commit to covering Vans Warped Tour, the country’s premiere travelling musical summer camp for the Hot Topic set?  Simply, it sounded better than another day staring at a computer screen surrounded by cubicle walls.
Truth be told, this was my umpteenth time covering the tour.  I’ve seen Blink-182 and Paramore on the tour’s side stages, I’ve mingled with veterans like Bad Religion, Joan Jett, Helmet, Descendents and NOFX, initiated online flame wars with a young Skrillex (when he was the frontman of From First To Last) and I’ve walked away with a new appreciation for young up-and-comers like Title Fight, Underoath, and Hostage Calm.
Though the 2013 edition didn’t offer the heavies of previous years – no Anti-Flag, Bad Religion, Dropkick Murphys or the like – I still arrived with a considerable list of “must sees”.  And I think I covered most of them during my time at the Cincinnati Riverbend stop.
Here are my takeaways from the day:
–          Although I never managed to join the Silverstein or Early November bandwagons when they were most relevant, both bands shined as seasoned veterans.  Mad props to Silverstein’s frontman for stealing Waldo’s hat.
–          I’m completely unashamed to admit an allegiance for Man Overboard, who I discovered at last year’s tour, Citizen and The Story So Far.  They are keeping it real with sounds that harken to the Screeching Weasels, Hums and Lifetimes (respecitively) that I grew up with. 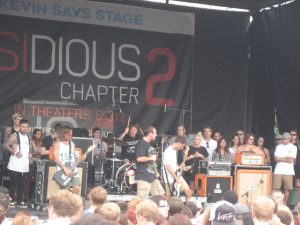 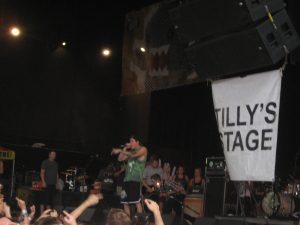 The Story So Far

–          Mixtapes sounded like shit on one of the venues side stages.  However, this may be one of the most sincere and hilarious bands out there.  Taking aim at the screamo newbees (less Soupy, more Radki), inviting a fan dressed as Gumby onstage, and appearing as though they were having the time of their lives, this is a band that have forever endeared themselves to me. 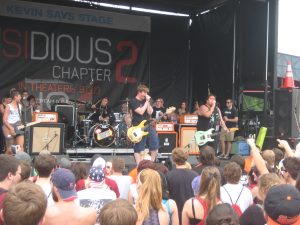 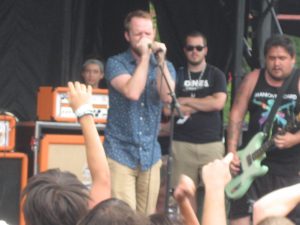 Soupy (The Wonder Years) joins Mixtapes for a minute.

–          There are few bands out there who deliver memorable pop songwriting chops the way Justin Pierre and his cohorts in Motion City Soundrack do.  My love affair started at Jag’s in Kettering and was definitely reignited during their hits heavy set at Warped ’13.
–          Discoveries of the day go to the sophisticated ska troubadours Beebs and Her Money Makers and Indecent, a Lush-leaning shoegaze pop band who seemed completely out of their element on the tour. 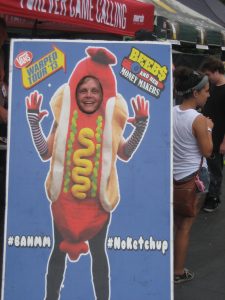 –          Skyline Chilli’s walking taco is the food of the gods.  Fritos, chilli and their light as a feather cheddar mix for culinary perfection.
–          Hawthorne Heights are one of the nicest bands in the universe.  I’m not just saying this because they count longtime friends JT Woodruff (who played in Eyes Upon Separation BTW), Mark McMillon (of The Story Changes), and Matt Ridenour among their ranks.  The line at their merch tent after their hits heavy set, and the kids walking away with enormous smiles are testament to the band’s dedication to their fans.  I suspect this is in no small part a contributing factor to the band’s longevity.  They’ve earned it, and hope they take pride in the impact they’ve had on the face of modern music.
–          My car stereo shit the bed last year and left me listening to The Wonder Years’ Suburbia on repeat.  Thankfully I never tired of it.  This band brought their genuine love for the game to one of the venues larger stages.  And I sang every word, as did hundreds of devoted fans.  And I think I managed to convert a few more, dragging my brother and friends to the stage for their balls out performance.  Best set of the day, hands down. 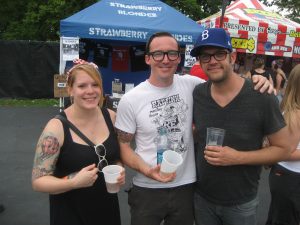 So congratulations go out to Kevin Lyman, who has solidified my status as a devotee (again), even as I pluck the gray hairs from my balding head.  I hope the tour is still around for me to attended with my yet-to-be-pregnated baby punks. (Tim Anderl)