By Matthew Moyer
Look,  I’m a shitty person, I know it. There’s this temptation—it surfaces when I get asked by strangers repeatedly if I have any “drugs,” or spy someone sporting a Native American headdress and fucking Nikes– to play the Al Capp-at-John Lennon’s-Bed-In role and be terminally cranky about a festival with the temerity to put “Psych” in its name.
But y’know what? Fuck that impulse. I can’t be cynical about the Austin Psych Fest. If the devil is in the details then the Psych Fest is the equivalent of one-hundred Slayer concerts all at once. The lineup was total crate-digger fantasy camp, spanning everyone from Billy Gibbons’ pre-ZZ Top psych outfit the Moving Sidewalks to Japanese sludge-monsters Boris. As far as I can tell, the Reverberation Appreciation Society had a bunch of music-loving kids running all aspects of the festival, from sound to security, and y’know what? It fucking worked. With about 75% less attitude. Corporate sponsorship was kept to the fringes (though that beer jousting arena was just weird). Staging, set times, etc, were well-thought out. And there was a food truck selling chicken and waffles tacos. End of story.
Here’s some subjective fandom action for you….
FRIDAY:
Nomadic drone-gurus TINARIWEN were the spiritual beginning to the Fest. Hidden beneath robes and turbans, they played a set of quicksilver mantras that were as much Velvet Underground as desert ecstasy. And they had a goddamn hypeman! When the setting sun broke out from behind some angry clouds two songs into their set and sent little fingers of fractured sunlight all around them… well, that’s pretty fucking perfect. After the sun set, SOFT MOON came on like a cyborg Jesus and Mary Chain somewhere in the transition from Psychocandy to Darklands. And damn was it loud, the bass frequencies became solid metal and got lodged in my throat, trying to crawl up my esophagus and burst out of my already wide-open-in-shock mouth. As part of the Fest’s due fealty to the originators of psych weirdness it was SILVER APPLES who were one of the first night’s headliners. Simeon’s eponymous homemade synth may no longer be the size of several refrigerators lashed together, but it’s still a sight to behold him manipulate oscillators as deftly as one would a “proper” stringed instrument. Alien lullabies end the night on just the right note.
HONORABLE MENTIONS: RAVEONETTES bring the winter. OM add a third member – and it’s a very good thing! 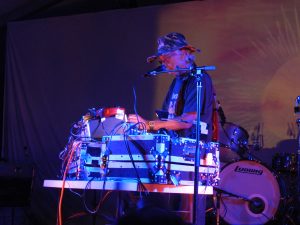 SATURDAY:
Now it gets weird. Masaki Batoh, former Ghost frontman, put on perhaps the most deeply strange performance of the whole weekend as BRAIN PULSE MUSIC.  He had a test subject hooked up to monitoring devices that broadcast her brainwaves as an electronic tone and he manipulated it, overlaid it with electronics and then started busting out all manner of strange noisemakers to add to the mix. Batoh bowed deeply to the dazed volunteer when he unhooked her at the end. BLACK BANANAS, the new(ish) project of former Royal Trux frontwoman Jennifer Herrema, confounded expectations. Remember that infamous Disco Demolition riot in Chicago in the 70s? Imagine if all the rockers who showed up for that realized the error of their ways and instead spun hundreds of disco singles all at once while belting out their favorite Cheap Trick lyrics and shredding on Flying Vs. Yeah, like that. The freaks came out for MR. QUINTRON AND MISS PUSSYCAT in force. And really, what’s more psychedelic than getting people to watch a puppet show? After that it’s down to business. Q+P bring their surrealist soul attack in spades, playing herder and faster than I’ve ever seen, and burying the audience in balloons. When the smoke clears, Miss Pussycat jumped off the stage and handed me a balloon. I died. (And my ghost continued to cover the festival.)
Respect due to every other band here, but SPECTRUM was the best of the fest, period. Sonic Boom and company’s witching hour set on a rainy Saturday night was serious business, for hardcore agoraphobics only. Peter Kember glides onstage, looking remarkably unchanged from his Spacemen 3 days. The man’s either a vampire or has formaldehyde for blood. He brings a full band out and does the unthinkable: A MOTHERFUCKING GREATEST HITS SET! And he does it with dazed and phased style and aplomb. About one minute into the heartbreaking lament “Angel” I started tearing up like a robot who just figured out what you humans call love. The set was deftly divided up with four more gentle numbers at the beginning (including an ebullient “How You Satisfy Me”) before going off the charts with full-on apocalyptic takes on Spacemen 3 classics “Revolution” and “Suicide.” Twenty-plus minutes of explosive sonic force later, the band leaves the stage one by one after an extended noise workout. Ascension. We walked out, dizzy, into a lunar landscape of floodlights and viscous, slate-grey mud.
HONORABLE MENTIONS: MAN OR ASTROMAN? set shit on fire. OS MUTANTES succumb to the most leaden excesses of 70s rock. 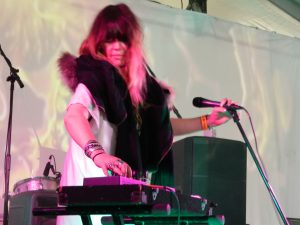 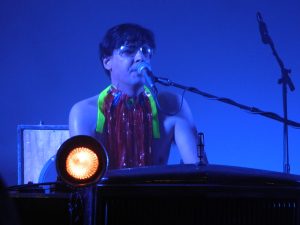 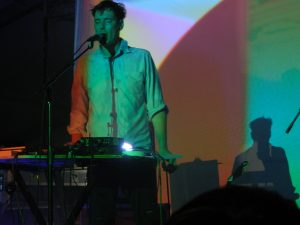 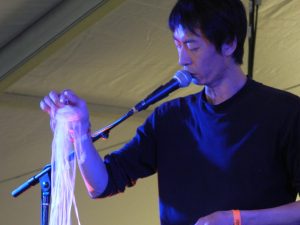 SUNDAY:
Arrived late due to catching a JAD FAIR set at Waterloo Records celebrating the reissue of the seminal Half Japanese debut ½ Gentlemen, Not Beasts. Look me in the eye and tell me I did the wrong thing. Back at the Fest, everyone’s getting pretty damned sundazed. NO JOY playing in the middle of the afternoon might seem like crazy talk, but the quartet made good on the promise of Ghost Blonde with a supremely icy and bummed out vibe that was somewhere between classic Babes In Toyland and Slowdive. Feedback squalls like vengeful spirits. For all intents and purposes, Houston’s INDIAN JEWELRY should have closed the damn show. Infinite bad vibes terror assault from the moment they clicked on the strobe lights. A skinny pale mess of leather, sunglasses, and cult robes, their music exits in the angry red nexus between Sisters Of Mercy and Throbbing Gristle. If the Manson Family did indeed kill the Summer Of Love the first time around, Indian Jewelry’s set was a singular reenactment of that ritual murder. Helter Skelter.
HONORABLE MENTIONS: ROKY ERICKSON gives it the full Bela Lugosi on “Night Of The Vampire.” KING KHAN & BBQ SHOW kick up a dust storm. GOAT = Believe the hype? 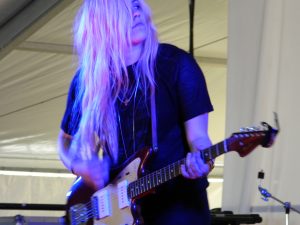 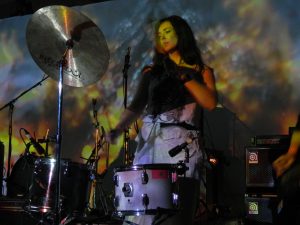