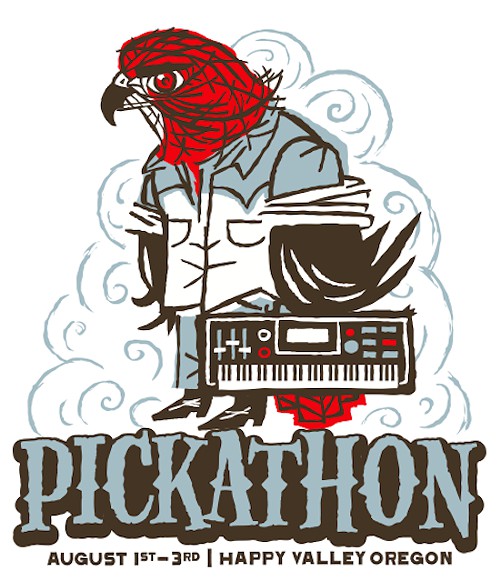 Festival: Pickathon, August -1-3, 2014
Location: Pendarvis Farm – Happy Valley, OR
Tickets: http://www.pickathon.com/
Headliners: X (acoustic), Jonathan Richman, The War On Drugs, Mac Demarco, Parquet Courts, Warpaint, People Under The Stairs, Woods, Mikal Cronin, Destroyer (solo)
Why we’re excited to go: Held on an 80 acre family-owned property just outside of Portland, OR, Pickathon provides an environment like no other music festival that I’ve ever encountered.  It’s close enough to town to simply leave for supplies, if you really need to, but isolated enough to feel removed from any corporate interference and urban chaos.  The truth is that the Pendarvis Farm is fairly self-contained.  Clean water is readily available–free of charge (as it should be)–and there are plenty of delicious high-end food options that are comparable to, if not cheaper than, anything that you would find in the city.  Local micro breweries, wineries, and coffee roasters have their goods on hand, along with massages and shower facilities.  The crowd density is reduced by the festival limiting ticket sales to a mere 3,500, so it never feels packed or overwhelming and, for those who have families, this place is remarkably child friendly with interactive music and circus entertainment.  The craziest part is how clean the whole place is–there is never any trash anywhere!–but even more surprising is how easy it is to naturally participate in the sustainability efforts without ever feeling forced into them, or like a some sort of ignorant heathen for fucking something up [one example is the solar panels on the Galaxy Barn which collect 100% of the energy used for the stage, as well as for everything used by the food vendors].
Of course, all of that is more about the environment than the music and, if the growing summer festival industry has taught us anything, it’s that people are willing to burn, starve, break their ankles, and roll around in their own filth, if the lineup has enough big names stamped onto it and there’s a party to be had.  And while the environment is definitely what sets Pickathon apart, it’s also what fuels the performances.  Last year (and I don’t doubt, every year before it), the common theme, during the sets, was performers mentioning how Pickathon is the best festival that they’ve ever performed at and how much they would love to return.  This year, 2 of last year’s highlights–Parquet Courts and Marco Benevento–have made sure to return to throw down high energy post punk and experimental psychedelic freak jazz sets, respectively.  The varied lineup goes on to include everything from DIY underground hip hop (People Under The Stairs), progressive bluegrass (Nickel Creek), and young indie stars making their own mark on the musical landscape (“jizz jazz” anyone?).  The artists all seem to enjoy it so much that they agree to spend the entire weekend at the property themselves, so don’t worry if there’s a conflict in the schedule; everyone plays multiple sets.  It’s hard to imagine exactly how perfectly the organizers have managed to make this whole festival unfold unless you actually attend it, but that’s only because there just really doesn’t seem to be anything else like it.