Time to start building your lineup for the Dayton Music Art and Film Festival, as the official schedules and venues for all participating bands is now released.
The DMAFF organizers announced the full schedules for both Friday September 18 and Saturday September 19 this past Friday on Facebook. With nearly 40 bands playing on stages across downtown Dayton, including the main stage outside of K12 Gallery & TEJAS, the Dublin Pub,the  Yellow Cab Tavern, Blind Bob’s Bar,Gilly’s Jazz, and Canal Public House, you’ve got a lot of options. 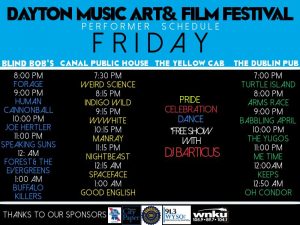 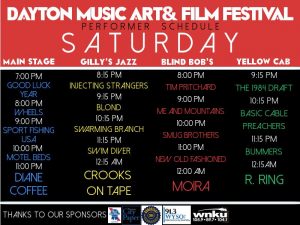 Formerly the Dayton Music Festival, the festival was rebranded this year and branched out to the visual arts under new leadership by Great Guys Entertainment. For the first time, they’re  partnering with FilmDayton and K12 Gallery & TEJAS to bring a curated selection of film viewings and a variety of art installations to the festival, raising the sensory experience up to 11.
Organizers from the Dayton Music Art and Film Festival have also sent out a call to artists on Facebook to submit work in any medium for consideration as part of DMAFF’s art exhibition at K12 Gallery and TEJAS, over the festival weekend September 19-20. Submissions are due by July 31; news of acceptance will be received by August 7. A call to volunteers was also sent out via Facebook.
This year, DMAFF is partnering with the nonprofit K12 Gallery & TEJAS at 341 S. Jefferson St. to bring four dynamic, interactive shows to festival attendees beginning Sept. 11.
On the lower level of the gallery, two main installations will take over the space: