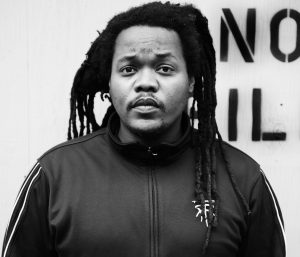 I first met Creature when I was doing write-ups for GB back in the early 2000’s. He was one of the few heads that I was able to relate to that was doing music that I had befriended. Creature is the type of cat that everyone knows either by name or face. Why is that? Well it’s because of his work ethic. Some people’s work ethic is made up of their daily ritual behind a cubicle. Creature’s cubicle is on any NYC street and his work ethic keeps him hustling until he feels he has communicated with as many people as he could about his music. In doing so Creature can meet an array of people, like Francis Ford Coppola just recently. He gives credence to phrases like “hustle hard or go home”. I ended up loosing contact with Creature for a few years, so when I recently connected with him via the internets I can see that the daily grind is still there

It’s been a minute since I’ve gotten up with the you fam, I see that you took the music in some different directions with your Rebelmatic group. Is doing punk-rock something you always wanted to do?
Yeah it was like a return to roots of sorts. I was in a punk-rock band prior to starting rhyming. Punk-rock is something I’ve always been doing, even my hip-hop has a big punk-rock influence to it – and my punk-rock has a hip-hop feel to it, so it’s all intertwined.

You’re like the consummate dude on the streets – when I met you back like in 02-03(?), you were hustling. Has your grind kept up in a steady pace? Or has the internet helped out a lot more then it did then?
Since we met in about 2003, I’ve released two solo albums – “Never Say Die” and “Hustle to be Free”; I published a book that I wrote called “The Underdog’s Manifesto: A Guerilla Artist’s Path to Independence”; and put out Rebelmatic’s debut album “Prey for the Vulture”. Judging from my experience with these projects, I’ve noticed the effects of the internet to be leveling the playing field, so to speak, meaning the internet has allowed us to get our music out to our supporters quicker by cutting out the middle people. But for me, there is nothing like the personal interactions with actual people.

Is the street hustle the same as it was back then, now that you have this whole new generation here with this whole different format in music?
No it’s changed, it’s definitely changed, because you have a whole generation of people, you have the kids who have never bought a physical (CD) copy in their lives. Plus, with music being in such abundance, you have all these people used to getting everything for free. But you still have a lot of people out there who want to support you, and support independent artists; it’s just finding creative ways to package your art.

First and foremost one has to be dedicated to the music to keep striving – what influences you to keep doing what you do?
Feeling like I have something to say and that people should hear it keeps me striving. And I feel like I owe it to myself to let what I have to say be heard.
What do you have on tap?
New Creature EP, Don’t Forget to Live, a Rebelmatic EP, and a Documentary coming out soon.
What/who music wise do you listen to when you need to clear your head?
Sly and the Family Stone, John Coltrane, Bad Brains, and The Doors.

You tweeted that you recently bumped into Francis Ford Coppola, you gotta break down that conversation man…what happened?
I was on Broadway and maybe 11th Street selling music and I ran into him. Initially I didn’t know he was, so I asked him, “Do you want to check out some music?” He responds, almost yelling, “Make if brief! Make it brief! I don’t have much time.” So I kind of chuckle, its almost humorous, and I tell him about the record in 10 seconds – I gave him a synopsis. And he goes, “Okay, how much is it gonna cost me?” I say “A reasonable donation.” He repeats again, almost yelling, “How much is it going to cost me?” I say “ten dollars.” He repeats again, “How much is it gonna cost me?” I say, “Whatever you want to give, I’m only asking for something reasonable.” My boy says, “He already told you three times.” He yells, almost like he has a hearing aid on and he can’t hear, “I know he told me that three times, I want him to go down on the price.” I say, “I did say initially it was just a reasonable donation, I wasn’t asking for a set price.”He goes, “I can make you rich, famous, and loved by everyone.” I kinda smirk at him like, oh okay, great. He says, “I’m Francis Ford Coppola.” I say, “hey, you did some great movies.” My other boy says, “I like one of your movies!” Coppola yells, “I’m not talkin’ to you!” I say, “Mr. Coppola, you can have this CD, how about a card or email or something?” He goes, “I don’t got a card, I have no cash on me, I’m going to Strands, buy some books.” So, first I’m thinking he’s just another quack, talking crazy, until I pull out my phone and I do a Google image search of him, and I’m like holy shit, that was really Francis Ford Coppola. And that is one of my many encounters on the streets of New York City.