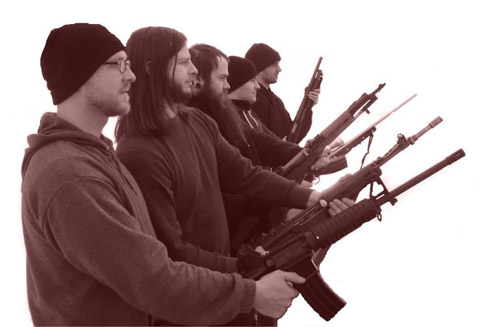 Mouth of the Architect

While some people (including this writer) wrongly assumed Mouth of the Architect was on hiatus or broken up when they dropped off the map a year ago, band members were actually in the midst of surgery and military duty.  Renewed, healed, and having settled their obligations, the Dayton, Ohio band are back with their brand of unflinching, atmospheric, metalgaze stomp and are set to release a brand new record in 2013 following their Summer and Fall tours.  We caught up with vocalist/keyboardist Jason Watkins to get the scoop.  Here is what he told us…
Mouth of the Architect have been on a bit of a hiatus as of late. Were you guys just burnt out and needing to pursue other avenues?

Neither. We had to take some time off from everything after we got back from Europe because our guitar player Steve had to go to Kuwait for a year. And our drummer Dave had to get shoulder surgery.
Why is now the right time to regroup for an album and some touring?
Now is the right time only because Dave’s shoulder has healed and he can play drums again.
We’ve been a band for almost 10 years and the whole idea behind Mouth of the Architect was to have something that lasted. Something we could leave behind. It’s always been more of a passion in being creative and honest with conveying emotion by using everything from soft melodic passages to crushing everything with a hammer, or even using acoustic instruments to get that point across. We have no rules in our songwriting. And in that way we can always use Mouth of the Architect as more as our therapist then just a band. So sometimes you may not hear from us for awhile but that doesn’t mean we have buried it.
Have you written all the material for the album you’ll be recording this year? What were those writing sessions like?

I would say that 80 percent of the record is complete. And it has been an amazing process. Steve started his own recording studio in Detroit, where he lives, so we spend our time split between here and there writing. Having a studio you can go to whenever you like to write/demo out parts for songs has opened a whole new way for use to really develop the structure of things. We all are very excited about the way everything is coming together.
How does that material differ from Quietly?

I would say it is definitely more progressive. The vocals are way more melodic and the guitar riffs are way more straight forward. Quietly, to me, was more like slowly walking up a flight of stairs just to jump off the top. And this album feels more like an automatic weapon.
We are doing everything ourselves this time around. But we did record two new songs back in October 2011 with Brian Whitten. One of which was for the Falling Down IIV compilation out of France. I think that just may of come out this month actually. There are a ton of awesome bands on it, Julie Christmas and Monarch to name a few. And all the music has to be unreleased material.
Didn’t MOTA collaborate with Julie Christmas not long ago? What was that like?
We became friends with Julie and Made out of Babies after touring with them a few years ago. Julie did a guest vocal track for the song “Generation of Ghost” on Quietly and I played keyboards for the song “Stranger” on their record The Ruiner. Hopefully we can do more stuff together in the future, there has been some talking. But the process was quick. It was all done by email. Sending songs back and forth.
In the past MOTA have had some pretty major lineup changes, shake ups? Has everything settled in the MOTA camp now? Are you still on terms with the guys who’ve left?

Most definitely. Greg was in my wedding a few years back and is still one of my close friends. Struck by Lightning and MOTA have played handfuls of shows together since they started. And I just talked to Alex the other day and he was kind enough to let me hear the new shit he’s been working on. It is incredible.
Will you be working with Translation Loss for the forthcoming album? When do you expect that to hit the street?
We will indeed. As for now we are looking at a spring 2013.
Are the June dates a warm up for a larger tour?
Sort of. We just wanna do as much as we can this Summer since Dave is all healed up and we can start playing again. But we are going back to Europe for a month in September. And hopefully we’ll be taking Enabler with us. And then a full U.S. tour after the album comes out.
How will Neon Warships schedule affect Kevin’s availability to tour/record with MOTA?
That’s not really an issue at all. We all have other things we do. Kevin and Dave also play in Bringers of Disease who are based out of Columbus now. Steve has his own projects that he works on and I have a band with my wife and my solo stuff I do under the name Curmudgeon. If you love making music/art then you’re gonna do it every day because that is where you heart is. We all stay pretty busy when we’re not working on MOTA, but when we are everyone pours themselves into it. Just like you would do for anything you care about.
(Mouth Of The Architect have mapped out their upcoming U.S. tour. A September European tour is also in the works with more details pending. The group’s schedule at present runs as follows:
06/01 Columbus, OH – Ace Of Cups
06/02 Bowling Green, OH – Howard’s
06/03 Lakewood, OH – The Foundry
06/15 Philadelphia, PA – JR’s Bar
06/16 Brooklyn, NY – St. Vitus
06/17 Baltimore, MD – The Golden West
06/22 Chicago, IL – Ultra Lounge
06/23 Milwaukee, WI – Borg Ward
06/24 Mishawaka, IN – Wander Inn
06/29 Indianapolis, IN – The Night Porter
06/30 Nashville, TN – Cafe Coco
07/01 Cincinnati, OH – The Mayday)