ZIMBY MOJO (Devious Weasel Games)
Being a Zimby is to hunger. To hunger to rule. To hunger for magical powers. To hunger for the flesh of your fellow Zimbies. Everyone agrees that the king has outlived his use. Not everyone agrees who should replace him. Now you must lead your tribe of ferocious warriors into his compound, working with the others to get his crown, then working against them to keep it for yourself.
In a brilliant twist on the cooperative game, Zimby Mojo unfolds as two different games in one. To start, players work together to thwart the king’s thugs, unlock his protecting wards and take him down. Then, the game transforms into something else completely as players fight against each other in a mad dash to bring the crown back safely to their own tribe’s lands.
This all works so well because very few things in Zimby Mojo can be done on your own. Most fights require multi-tribal stacks of warriors to sway the odds or well placed magical barricades and mindless Zimby Zombies to break up escape routes. It demands cooperative play, but cautious and guarded cooperative play that leaves you in a better position than the others. 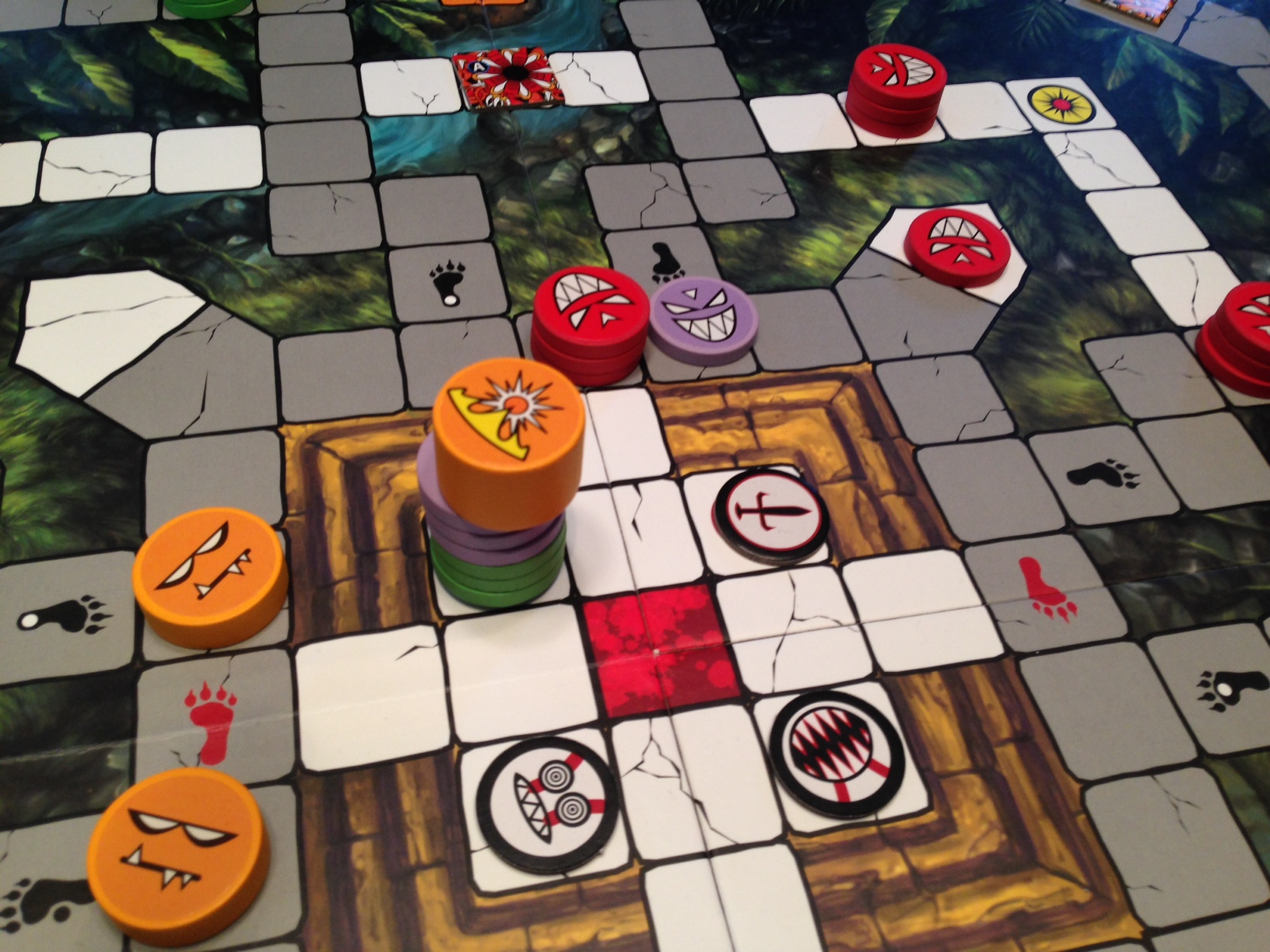 The great game art and background information provided in the rules is an immersion into the vicious world of Zimby Mojo. The backstory is also a nice reassurance that no, this isn’t some outdated imperialistic view of the dark jungle continents and their “savage” inhabitants. Zimbies are entirely fictional humanoid-type creatures with their own cultures and evolutions.
Outside of this rich narrative, the main problem with Zimby Mojo does come from its rules. It’s not that it is an overly complicated game, but the mechanics can get a little sticky with all of the things you have to remember. The rules don’t do the worst job in conveying how to play, but they also fail to give a clear and concise rundown without having to rifle through a number of pages. Even a player aid that I found online was four pages long. This makes explaining the game to new players daunting and you almost have to approach your first game with a mindset of playing the game just to learn its rules. Our first play through was riddled with “Oh, you can do that?” and “Wait, you can’t do that,” and then looking back we still got a few rules wrong.
The complication with the rules mean that Zimby Mojo probably won’t appeal to casual gamers, which is a shame because it really is an enjoyable twist on the cooperative game that is bringing so many new folks to the table. It’s also a fun theme (who doesn’t want to be the cannibal king?) that works well with the mechanics of how the game is played.
If you are someone who can have fun while being confused Zimby Mojo is a game unlike any other on your shelf. You’ll be plotting two-sided team ups for a backstab, only to be backstabbed yourself before you’re even halfway through your original plan. No time for hard feelings though because last turn’s traitor is this turn’s only way to stop someone else from winning. (Devious Weasel Games) by David C. Obenour