Yashima promises to bring epic magical martial arts battles similar to what’s found in recent Naruto games to the tabletop. Its backstory is pretty standard fare. Humanity screwed up the planet and loosed kami (spirit guardians of nature) upon the land. Eventually a balance was achieved as a chosen few humans learned to communicate with kami and embrace their power. Hubris reared its ugly head, and now kami masters battle one another in an effort to become a great, unifying leader. It’s as good a reason as any to justify some old fashioned brawling, but players are unlikely to be enthralled by the narrative.

Players choose one of four kami masters and one of four kami, pair them up, and prepare their spellbooks for battle. The base game offers sixteen combinations, but each master seems to pair best with their default kami. Akiko, for example, is a fire mage. Think of the Planeswalker Chandra Nalaar from Magic: The Gathering. It should come as no surprise that she pairs best with the Phoenix kami. Players then lay down hexagonal terrain and fight to the death. 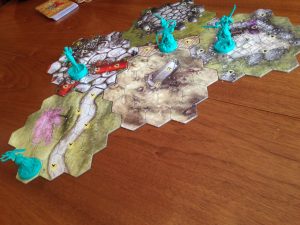 Movement is based upon a core speed stat, but nearly all other game mechanics are handled with battle cards and tome cards. Tome cards comprise a player’s tome (or spellbook) and can provide significant advantages in battle. However, more powerful spells are often deep within tomes, and it takes time to turn through one’s pages. Battle cards exist for both kami masters and kami themselves. A master’s cards and her kami’s cards are shuffled together to make a battle deck.

Cards do a lot in this game. Perhaps they do too much. They account for offensive spells, defensive reactions, karma pool, life total, and more. This can be somewhat overwhelming for new or inexperienced players. Yashima is also heavy on keywords. To USE a card is different than to LOSE a card. DISCARDing is different from EXERTing. IMPRINT is not the same as EQUIP. And so on. Additionally, there’s the ADAPT mechanic. It varies depending on which master is being played and can drastically alter a kami’s usefulness. These are minor quibbles but can really add up over a game. However, there are other tactical aspects to concern players. Terrain on the gameboard can help or hinder players. They may end up with too many or not enough combat and/or move actions. It should be simple stuff that ends up needlessly complex, primarily due to the lackluster instruction manual. 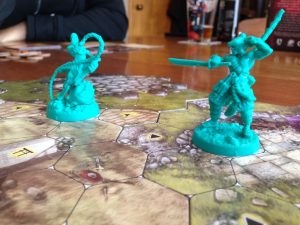 Every attempt to play Yashima within my gaming group has ended in the exact same way. We begin excited about the potential of awesome battles between martial artists punctuated by incredible manifestations of kamis’ powers. Then we get frustrated by confusing keywords and contradictory instructions. Then we get bored and stop playing. Others’ results may very, particularly if players are fascinated by Asian mythology. Grab Yashima: Legend of the Kami Masters if the theme truly appeals to you but most others should probably pass on this one. (Greenbrier Games) by Kris Poland