Dave and I are great friends and agree on many topics, but I have to point out something from part one of our wrestling gaming roundup. I’m fairly certain wrestling can’t be back. To the best of my knowledge, it never went away. Though it may have experienced numerous ups and downs over the past 30 years, wrestling never died. And it never will. As long as good and evil exist in this world, so will professional wrestling. Now on to the review! 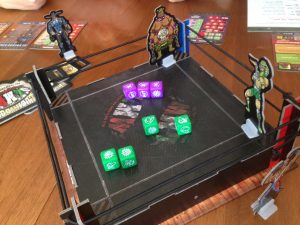 Apart from sharing similar subject matter (Even this is debatable for those who see pro wrestling and sports entertainment as very different things.), Luchador! Mexican Wrestling Dice is nothing like WWE Superstar Showdown. Both feature muscular combatants vying for in-ring supremacy, but as far as game mechanics go these are two radically different animals. Superstar Showdown is a game of rock-paper-scissors (Or, more accurately, slam-strike-grapples.) at its core. Luchador! is, on the other hand, a dice rolling game.

Players roll a lot of dice to simulate beat-downs in singles, tag-team, three or four player free-for-all, and cage matches. Each player primarily employs four wrestling dice with faces labelled as follows: Miss, Hit, Block, Counter, and Pin. Competitors roll simultaneously, and dice must land in the included cardboard squared-circle to have an effect. The ring is a small touch, but it’s so damn cool! It adds just that little touch of authenticity and grandeur to each and every round. Successful hits or counters allow for the rolling of green Hit dice. They cause from one to three points of damage to an opponent. Rolling two Hit results allows players to roll a special Luchador die that can inflict up to seven damage on an opponent. If an opponent’s life is low enough and if a Pin result is rolled, then players can roll special yellow Pin dice. Opponents can be defeated either by pinning them for a three count or knocking them out. Advanced rules give more personality to each luchador by highlighting their strengths and weaknesses as well as allowing for Killer Combinations that can instantly alter the course of a bout. 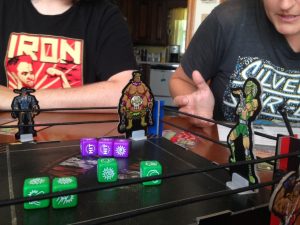 Games of Luchador! are very fast-paced. Experienced gamers will pick up the rules quickly, and newbies will only need a few rounds to get the basics. It’s not particularly deep or complex, but it is a helluva lot of fun! Each luchador has a distinct personality. Descriptions of their signature moves make them feel like real wrestlers, and proper mindfulness regarding their strengths and weakness can mean the difference between victory and defeat. There are even cardboard championship belts for singles and tag-team competition! This can lead to day-long, pay-per-view style cards that culminate in championship matches. Putting together tournaments would be equally easy and fulfilling. Bragging rights mean so much more when parading a cardboard prize before all your shamed opponents. What it boils down to is that this game is a whole lotta fun and definitely a case of the more the merrier.

We hope you enjoyed our coverage of these two great wrestling games that are currently available in games stores worldwide. I’m sure we’ll get some cool expansions to Superstar Showdown, and we’ll do our best to keep you updated on them. There may even be an entirely new wrestling game IP that we can tackle here. I’ll keep my fingers crossed for either PWG or Lucha Underground entries, and I’m certain Dave shares that enthusiasm. Will there be a part three of our wrestling gaming reviews? Only time will tell! (Backspindle Games) by Kris Poland