VIKINGS ON BOARD (Blue Orange Games)
Take control of the harbor and send your ships out to sea, filled with supplies (or at least gamble correctly on who else will be so fortunate) as clans compete for power in Vikings on Board!
For this game, players take turns over seven or more rounds selecting from the 11 available actions at the Village. Some of these actions are more useful than others, but fall further back in the order of the Village. It’s a pretty brilliant and easy to follow mechanic as players place their Viking pieces from one side of the Village (the current turn’s order) to the other (the upcoming turn’s order). Take a strong turn and you’ll be limited next time. Make small moves and set yourself up for a big next turn. Play continues this way until seven of the eight ships at harbor have set sailed at round’s end.
The 11 Village actions are primarily used to move, swap and rearrange your’s and other players’ ship segments to determine control. Sections contain one to three shields in one of the player’s colors, denoting power. The player with the most total shields when a ship is sailed is given control and in the case of a tie, the tied player with the segment closest to the front is given control. 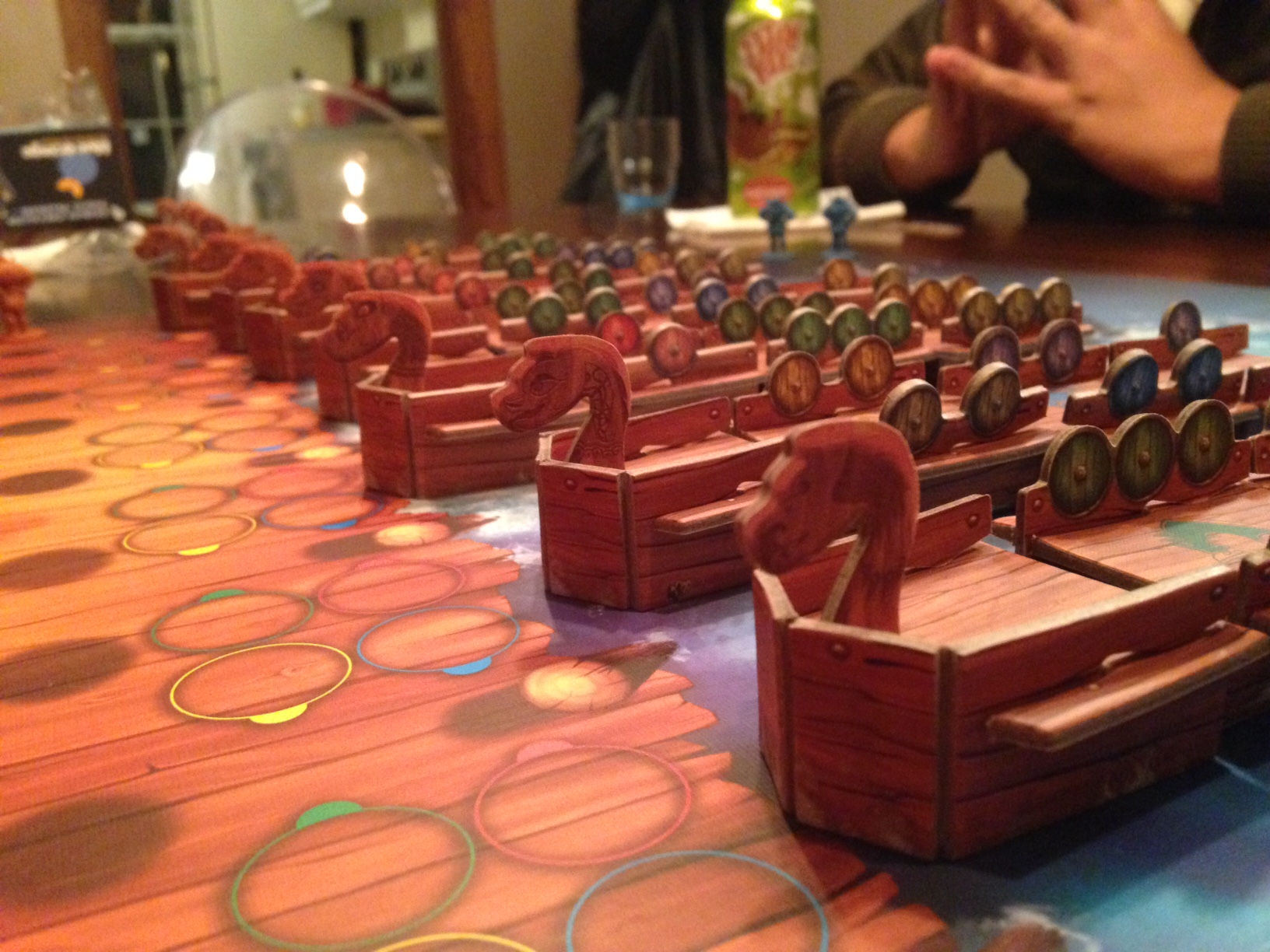 But having control may actually score your opponent more points… if they played it right! The actions not associated with ship segments include adding supplies to the ship, increasing the value of supplies, and gambling on which clan will have control. Having control of a ship gets you first pick of that ship’s available supplies, but then the second most picks, and the third the most and so on, circling back if supplies remain. Supplies won are worth one point at game’s end, but players can choose the market Village action to raise the value of any supply type to up to four points! Gambling is the final aspect of control looked at after sailing as players can place one of their four gambling tokens face down on a clan’s color and secretly score that token’s points if they gambled correctly.
For as simple as the rules are and with only two ways to score there are still a number of ways to play Vikings on Board. Do you focus on collecting a single supply type and raise its value? Do you keep a keen eye on ship control and gamble accordingly? Do you play spoiler to your opponents trying to execute their plan? Many games might have been tempted to add a deck of randomizing cards as an action, but the lack of chance involved makes every decision unfold many times over throughout the game.
Finally, the attention that Blue Orange Games put into the production of Vikings On Board is brilliant. Being pretty purely decisions-over-luck in its gameplay, the mood is set with great game board art, cartoony Viking miniatures and smartly crafted cardboard ship segments. Whether you’re playing with younger gamers or are just someone who appreciates more thematic games, the game itself keeps the Viking theme central and saves play from feeling too strictly puzzle and strategy based. (Blue Orange Games) by David C. Obenour

Tags: Blue Orange Games, board games, Featured, Vikings on Board