TIFFIN (Rio Grande Games)
Every day over a quarter of a million hot lunches are delivered to workers in Mumbai, India. Carried in metal, stackable tiffins, these lunches are distributed through an amazingly effective organization of dabbawallas (delivery people) who pick up the meals at the customer’s home, bring them to a sorting facility, load and then later unload them from a train, resort, route and finally deliver the lunches. It’s a fascinating system and one that you get to participate in for Tiffin.
Assuming the role of the dabbawallas, players take turns loading tiffins and delivering them along the routes. A semi-cooperative game, players work together to complete routes but also need to focus and predict which routes they can play on to maximize points while also minimizing their opponent’s.
All of this is done through a fairly simple dynamic of single action turns for collecting different colored delivery cards to use to complete different colored route boards, in a fashion somewhat similar to Ticket to Ride. After the route boards are filled, they are scored for the three highest contributors through a progression of tiffin tracking cards of ascending value. 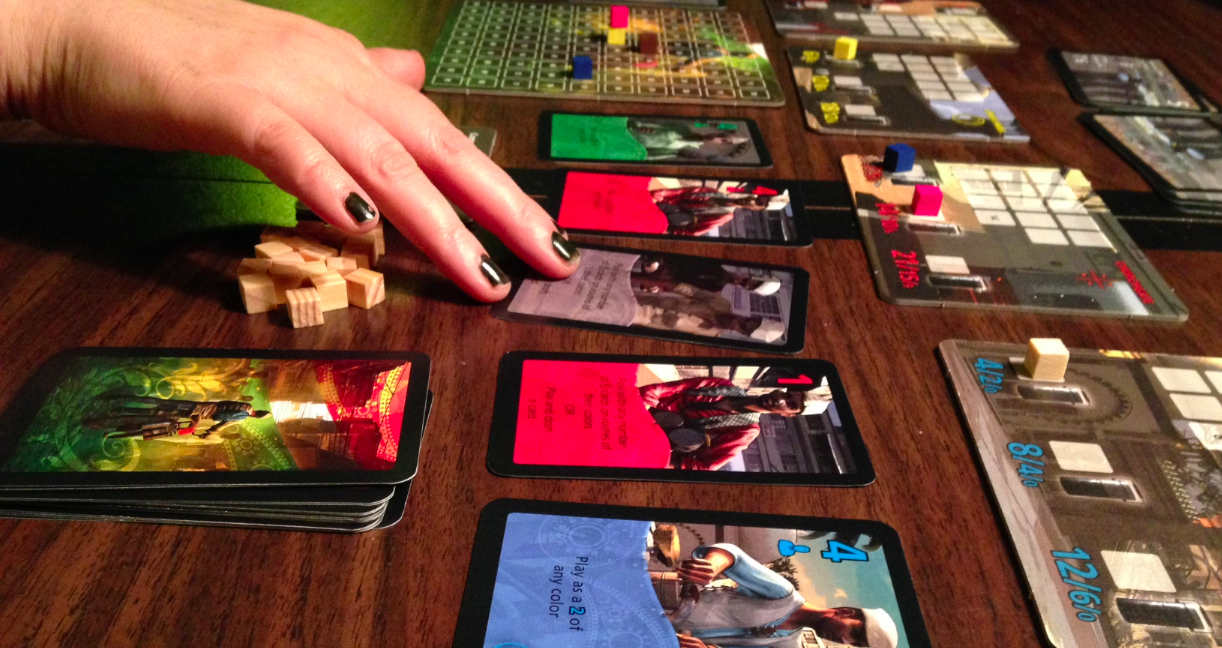 The reference to Ticket to Ride isn’t to say that Tiffin owes a great debt to the popular game. While some of the mechanics relate well, there are different dynamics at play too. There’s an element of push-your-luck as you load tiffins for additional points but then also open up a route for others to play high value delivery cards and take majority scoring bonuses. Also for as many things that can be planned out, each player has two single use action cards to shorten or lengthen routes, and certain delivery cards trigger the competitor’s possible involvement on routes. Throughout the game there’s a lot to consider and also a few things to concede that you can’t really consider until they happen.
It’s exciting to see how well the designers were able to pair the game mechanics of Tiffin with the thematic inspiration. The art is also vivid and colorfully done, bringing all of the sounds and smells of a bustling Indian street to mind as you play. Games with rules and playing times twice as long would be lucky to be so immersive. (Rio Grande Games) by David C. Obenour