SALEM (Passport Studios)
The year is 1692 and paranoia is tearing through the Puritan community of Salem, Massachusetts. Neighbor turns on neighbor and family member on family member as accusations of witchcraft coupled with a fanatical clinging to orthodoxy result in one of the darkest chapters in American History. Taking on the role of the advocate for one of these families, this is the environment the players of Salem are thrust into.
The unfortunate first impression that comes from Salem is the rather bewildering explanation of how the game is set up. Villager cards are separated, re-stacked, paired with order identity guide cards, organized again and then shuffled by each player. The reasoning behind all of this is that the game’s randomizing effect needs to adhere to a Sudoku-esque guideline of not having more than three witches for each numbered villager (column) and each colored family (row). Without the mixing and matching of ordered stacks, after a few turns it’d be easy to deduce any established randomizing elements. So after some serious head-scratching through the first few pages of rules it eventually becomes clear what, why and how you’re doing all of this.
The other unfortunate early impression that Salem’s rules give is that if you aren’t playing with the full set of players, you’re not playing the game how it was designed to be played. Explained in an appendix in the back of the book, additional unused families are split up amongst the players and only a token is added to denote control. It felt a little under-developed at first and very unfortunate, considering how hard it can be to get seven players to commit to a 90-120 minute game.
So after the confusion and then disappointment in pulling together only six players for our game, I’m happy to say that Salem ended up being a lot of fun after all!
Not having to explain set up, the game itself plays easily. For each turn, players accuse other player’s family members of being witches. Once accused, that player offers an alibi of either that family member is or isn’t the same as another, or out of that family member and two others there are so many witches. Players record this information and slowly turn assumptions into assertions as they fill out their deduction sheet. The accusations then lead to the trials and players vote on who of the accused they think is a witch. After four turns, the player who was right (or not wrong) most often wins. 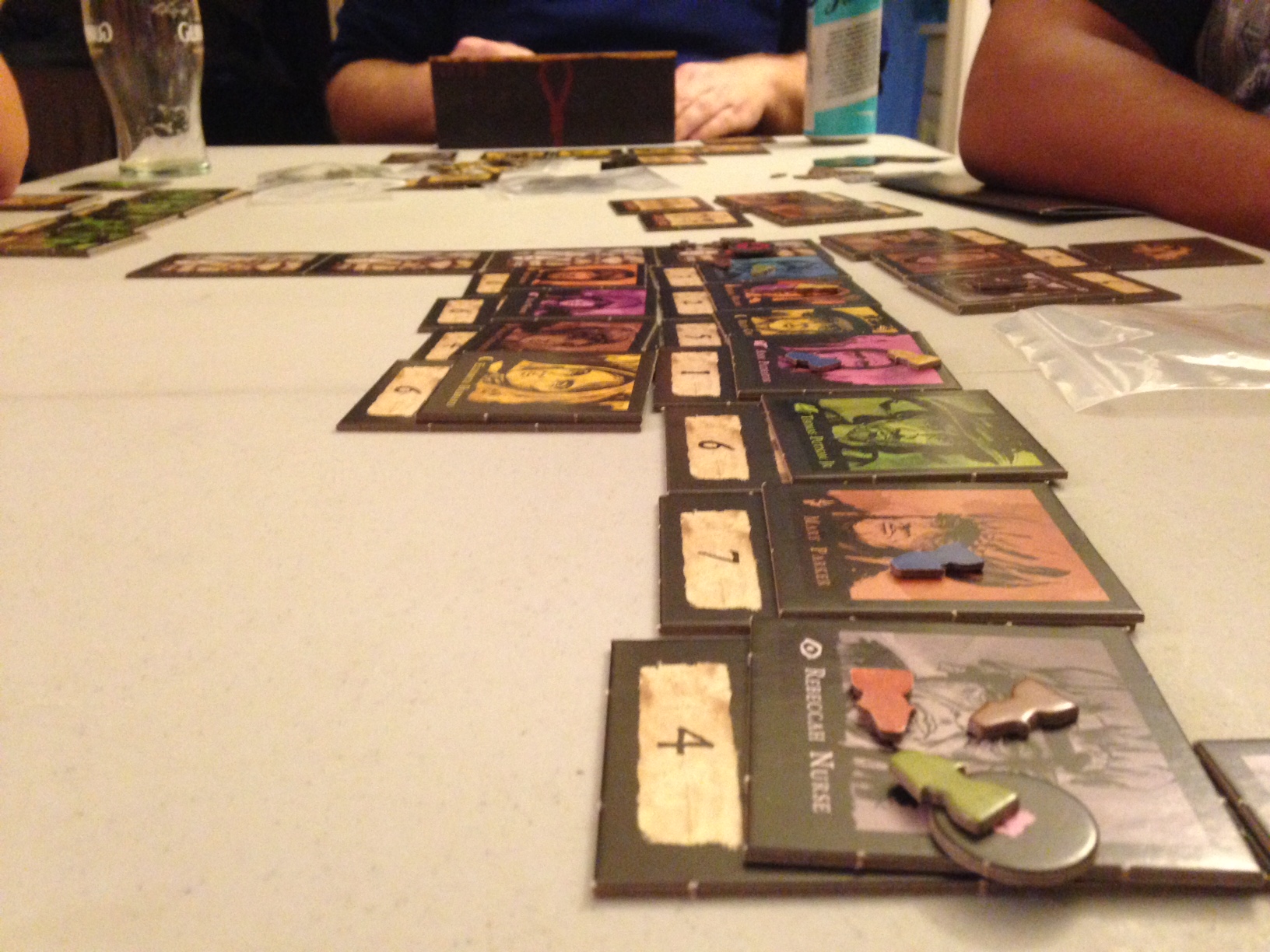 There don’t seem to be many of this sort of pattern driven, logic problem, deduction games and the mechanics work brilliantly for Salem’s subject matter. The twisting logic of alibis wrap up in the accused making you almost certain right up to the point of “wait, no – if this is true than that can’t be.”
The art for Salem is beautifully done in an inked wood-blocked printing style, highlighted by splashes of watercolors. As often the case though, there is some confusion between a few of the colors that were a little too similar (red, orange and brown) but tiles also have logos to help differentiate.
Also of note is the amount of research that designer Joshua Balvin put into the game. Each character represents a real person from the Salem Witch Trials and the back of their cards gives a short insight to their story. The four turns of the full game are represented by the four Witch Trials that took place and are labeled with the historical dates. These details are not only a nice added bonus but also do a good job of putting players into the mindset of this dark chapter in American History. (Passport Studios) by David C. Obenour