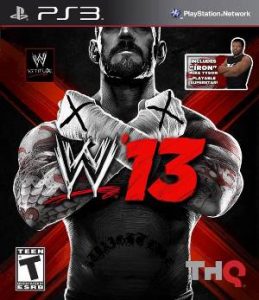 WWE ’13 (Xbox 360, PS3, Wii)
Every year World Wrestling Entertainment and THQ release a new WWE title. And every year I end up buying it. So if nothing else they are marketing the game correctly. Other than that, WWE ’13 feels like just more of the same. There is a new Attitude Era Mode which allows you to play some of the big matches from the attitude era of the WWE which can be fun. And then you have the same fair as last year’s WWE ’12. You have the Universe Mode which is a very weak story mode. There is no voice acting, and you are kind of left to guess why your tag team partner is feuding with you suddenly while remaining your tag team partner. This is just one example of the odd direction that THQ has taken the story. If you played WWE ’12 then you are already familiar with this. Maybe I am crazy, but I miss the days of the cheesy voice-over and short stories from some of the old WWE games. The Universe Mode in WWE ’13 just feels empty, and after you win a few matches it starts getting old very quickly.
This is not to say that WWE ’13 does not have its bright spots. The Create Mode is still amazing, and they have added a few more things that make building new wrestlers fresh. Creating moves is a lot of fun, but I can never seem to create exactly what I would like. When I do and then see it in action is is not very impressive. That may just be saying something about my skills in creating the moves though. I am afraid that most of the fun in the game is found in these creation modes.
The actual wrestling in the game is fun at first but gets old very quickly. Every match seems pretty much the same, and the one button reversals are very irritating. If playing in multiplayer two equally matched players will constantly reverse each other, and the match will go nowhere. In the single player mode it is not as big an issue, as the AI tends to reverse sparingly. Believe it or not, I do enjoy the game. However, if you played and got tired of WWE ’12 then you are not going to be real excited about what WWE ’13 has to offer. The changes in the game do not constitute a full title release.
It is time for THQ and WWE to take a look at what other game companies are doing and consider releasing content updates for the WWE titles while skipping annual full title launches. Maybe launch a full release every two years. I think most fans would be willing to pay a little for roster updates, story updates, and new modes of play. I feel that this is a better model than releasing what is essentially the same game every year. (Yuke’s) by Steve Griffin