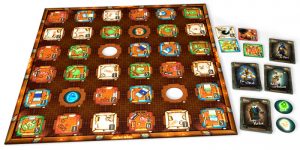 THE PHANTOM SOCIETY
Iello Games grabbed a lot of folks attention (including me and my nerdy pals) a couple of years back with a quick and fun game called King of Tokyo. Taking on the roles of competitive island marauding monsters, effectively setting up some easy to understand mechanics for a “king of the hill” type game, the art and the premise were spot on for good times.
With similar focuses on smart design (though this time with a steam-punk bent) and short and simple gameplay, Iello releases their newest game, The Phantom Society. All outward indicators pointed to more of the same goodness… and most of those indicators turned out to be right!
First, the goodness. The Phantom Society is a very simple game to understand. Players take on the roles of either ghosts or ghost hunters at the Sir Philipp Venkman Marlombier Manor Hotel in Scotland. The hotel is constructed anew each game (always a welcomed mechanic for repeated play) with players taking turns placing rooms of varying value on the board. The ghost hunter players want to capture the ghosts without causing too much damage while the ghost players want to wreak havoc and throw the hunters off their trail. It’s a little like Minesweeper or Battleship in how it plays out. Accordingly, you can deliberate on your choices as much or as little as you’d like. 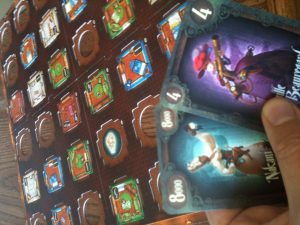 Another thing I want to mention is that whether we’re talking a ten minute game of checkers or a two and a half hour game of Agricola, games are toys and in that sense should be enjoyable to look at and clever in their design. Here The Phantom Society is at its best. There’s no skimping on art. In fact, the designers seemed to have gone above and beyond (more on that later). The game board itself is also interesting, comprised of two boards – one glued on top of the other – creating a little space for the ghost player to secretly hide their discs underneath the room tiles. Fun, right? Right!
For all of the attention to detail though, there were a few missteps. Firstly, ghost players need to be careful to put their ghost discs in the board the right way down (the side puckered by the machine cut and not flat). The fit’s just too snug otherwise, and the room tile won’t be flush with the other room tiles that don’t have a ghost underneath them (making it a pretty dead giveaway for the hunters). As for the art designers going above and beyond, room tiles feature a “destroyed” room depiction on their backside, which seems unnecessary given that the rules say to remove tiles from the board and not flip them. Finally, there’s some discrepancy when talking about the value of numbers in the game. Sometimes numbers are referred to in single digits which are representative of x,000 and sometimes they’re written out in their full quadruple and quintuple digit form. An argument can be made that writing out the extra zeros could block some of the art, but the inconsistency felt a little poorly executed.
At the end of your 20-minute game these are relatively minor quips that are easily outweighed by a fun to look at and fun to play game. (Iello Games) by David C. Obenour