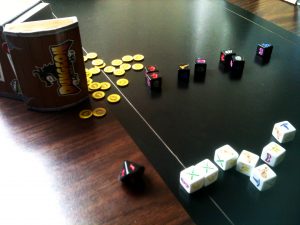 Dice-based games seem to be making a bit of a comeback in the geekworld, following the success of WizKids’ dice-building game, Quarriors and Fantasy Flight’s cooperative press-your-luck dice game, Elder Sign. Both did a great job of taking the granddaddy of randomization, the 6-sided die, and adding layers of choices and strategies to make a game that you’re happy to play for 10s of minutes.
While there are seemingly limits to what you can do with such a mechanic, Dungeon Roll has also succeeded in making a highly entertaining little game. It also comes in an actual treasure chest, which only the most coolier-than-thou could not admit is pretty damn awesome.
Dungeon Roll is a quick, easy to play and learn dungeon crawl game. The players all pick a hero and then lead a party of warriors, clerics, wizards, thieves and champions as far as they can into a dungeon. Your party is determined by rolling seven white hero dice and each dungeon level’s mix of goblins, skeletons, oozes, potions, treasures and d-d-d-dragons (gulp) are determined by rolling seven black dungeon dice. The delves themselves go quickly, so there’s not a lot of downtime either (another must for these sort of fun and relatively simple games).
The only real drawback for Dungeon Roll is that some of the character’s special abilities are much better than others. The Commander’s ability to “re-roll any number of Party and Dungeon dice” pales in comparison to the Paladin’s ability to “discard 1 treasure token to defeat all monsters, open all chests, quaff all potions, and discard all dice in the dragon’s lair.” Still, it’s nothing that a few house rules can’t reign in to make for a more balanced game.
While it can be played with 1 to 4 players (and I really can’t see why it can’t be more, as long as everyone’s alright waiting for their turn to come back around), Dungeon Roll is probably the best two-player game I’ve ever played. It lessens the direct competitive nature of a two-player game since it’s played more in a way of you against yourself (at least until the score’s added up in the end). It’s also designed with only two-people playing at once, so omitting the third and fourth player doesn’t mean you’re missing out on any of the chance and mechanics that might be otherwise available. (Tasty Minstrel Games) by David C. Obenour