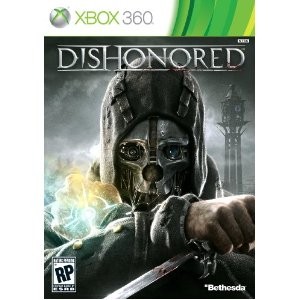 Dishonored (Xbox 360, PS3, PC)
It’s been what feels like forever since a major publisher has put out a game with innovative gameplay and more focus on play than cut scenes. Finally, Bethesda and Arkane Studios bring us Dishonored.
In Dishonored you are given the option of how you would like to play the game. This is done through gadgets and special power upgrades. If you want to sneak your way through the game, there are powers geared to help you achieve that goal. If you want to run through swords swinging, there are options for you as well. The powers range from slowing or stopping time to the ability to summon a horde of plague rats to devour your enemies. And you have access to gadgets like sleeping bolts for your crossbow, hand grenades, and a trap that rips your enemies to shreds.
If you have played a lot of stealth games, then the easy and medium difficulty may not give you a lot of challenge. However, the harder difficulty settings will challenge you thoroughly. Attempting to go though the game completely unseen is both frustrating and very gratifying if completed. Above all, this game is just plain fun!
The story is well written and interesting enough to keep you playing. The setting and art style are fantastic. The voice acting is done well. All of this, however, takes a back seat to the gameplay.
Sneaking around and plotting your course through the levels does require some patience while you watch your enemies and make note of their movements. You are also given some options when hunting down your targets. You can kill them or get rid of them in a nonlethal way.
There are two endings to the game directly effected by how you chose to deal with your targets and other enemies. If you kill everyone you will get the darker ending, but if you are merciful you will get a happier ending.
The replay value of this game is excellent. I finished my playthrough to write this review and then found myself immediately wanting to play again in order to get through it completely undetected. It has been quite some time since I found a game that made me want to play it again immediately after finishing it once.
I can not recommend Dishonored enough. Go out and get this game! (Arkane Studios) by Steve Griffin