By Kristofer Poland
INTRODUCTION
I missed last year’s Gen Con because I had a previous commitment at a space rock opera in Sheboygan, Wisconsin. This year it was back into the fray. It seems I picked a helluva year to return. Gen Con was packed with nearly 50,000 attendees. That’s a 20% increase from last year. At a time when attendance is suffering at a number of conventions, Indianapolis’ shiny gem of geekdom performed strongly. As attendance was up, so did some other unfortunate things. The sheer number of apparel retailers was disappointing, occupying real estate that I’d rather see filled by game developers. If I never see another Big Bang Theory shirt or Doctor Who dress it will be too soon. So here’s what I thought of my experience. 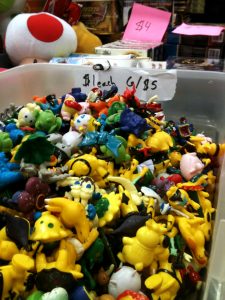 WHY WE ATTEND: THE GAMES
While I spent plenty of time digging through bins of Warhammer bits to build my Skaven horde, I really enjoyed the opportunities to play games in various stages of development. Here are a few highlights:
Star Trek: Attack Wing – I love the X-Wing Miniatures Game by Fantasy Flight. It’s a wonderful balance of tactical thinking and luck. Plus, the ships are beautifully sculpted. Attack Wing is the exact same game save for the fact that it replaces the Star Wars theme with a Star Trek vibe. There are minor changes made in order to stay true to the universe Trekkies have come to know and love. Some ships can cloak (+4 dice to evade rolls). Shields can be dropped and raised. Scans reduce defenders attack dice by one. Otherwise, it’s essentially the exact same game. Only it’s made by Wizkids. Weird. But fun as hell. And now we can finally resolve the debate over who would win in a fight between Picard and Skywalker. 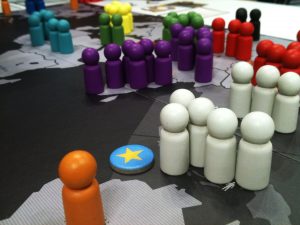 Tomorrow – Conquistador make thoughtful games with elegantly designed game boards. Tomorrow is no exception. Controlling overpopulation is the name of the game, but simply nuking countries players dislike isn’t necessarily going to cut it. Turns out fallout is a bitch. Players can work together (possibly while secretly scheming their own glorious victory) to solve this global crisis before it spells imminent and painful death for us all. Whee!
Summoner Wars – We’re featuring Plaid Hat Games’ Bioshock Infinite: The Siege of Columbia in the current issue of the magazine, so buy that! Summoner Wars is the game that got the ball rolling for Plaid Hat. It’s an interesting mix of collectible card game and battling board game. It’s not quite chess, but there’s solid enough balance and tactical intrigue to make each playthrough interesting. I highly recommend the Master Set that comes with a game board and six different Summoners’ factions. 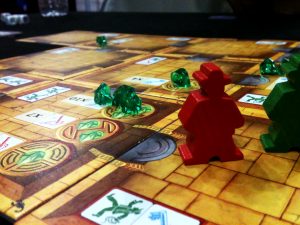 Escape: The Curse of the Temple – Cooperative games seem to be all the rage these days. Escape is a great example of the genre. Timing is of the essence as players must roll dice to explore the temple, discover treasures, and get the hell out before the whole thing comes crashing down. An entire game only lasts about ten minutes. It’s the perfect thing to play between lengthy sessions of wargaming, role-playing, or whatever else floats your boat.
Space Cadets: Dice Duel [a quick addition from Ghettoblaster editor, David C. Obenour] – Another example of Kris’ noted trend towards cooperative games, but this one is only semi-cooperative. Like the original Space Cadets game, players form spaceship crews [captain, helms, shields, weapons, etc], but for Dice Duel they form two battling ships’ crews. The entire game is played in real-time, only stopping the frenzy to fire torpedoes and resolve their damage. Orders are yelled and tension runs high (my hands didn’t stop shaking until about a half hour after), making this a thoroughly unique and fun board gaming experience.
Hex: Shards of Fate – Fellow Ghettoblaster contributors and hard-ass gamers Adam and Steve pulled me into this online only card game by supporting its wildly successful Kickstarter campaign. I’m glad they did. Magic: The Gathering comparisons are inevitable. That’s okay. Magic’s an incredible game that’s survived and thrived for a long time. Building upon that foundation, Cryptozoic has added gem slots to boost cards and other fancy things. They have plans for an amazing infrastructure, robust tournament play, guild formation, and even raids! If CCGs are your thing, you’re going to want this game. Meet me online, and we’ll test our decks against one another.
Square Shooters [another quick addition from David] – A deck of cards on the sides of 9 dice (6×9 = 54, 52 cards in a deck + 2 jokers). It’s a fun, albeit pretty heavily luck reliant system for playing card games. Basically you’ve got a twist on Yahtzee, which you’re either going to like or not. The real exciting news though is that since this game got released two years ago people have been making up rules for their own favorite card games. Fully embracing this culture, the designers are hosting contest this October 1-15 and the winner will get their rules published and $2000! Head on over to http://www.squareshooters.com/thatshowiroll/ and get creative.
SUPER SEXY NERD TIME: D20 BURLESQUE
I had high hopes for D20 Burlesque, but I admit to being a bit apprehensive. Nudity makes me nervous and uncomfortable. But I set aside my hangups and went in to have some fun. There were some rocky bits. It took a while to get started, and there was a lengthy intermission. One act that required a lot of audience participation went on for way too long and led to some groan-inducing lines from the peanut gallery. Nevertheless, it was a lot of fun. My two favorite acts came at the very end of the show. Vonka Romanov’s portrayal of Misty from Pokemon was equal parts alluring and hilarious, and the way she incorporated Squirtle into her act was a work of genius. Stella Chuu’s Tron-inspired finale was the perfect way to wrap things up. Blue lights and swirling discs made what was already eloquent all the more exciting. Summed up, this was a really fun show that was unfortunately marred by numerous technical difficulties. I applaud everyone involved for their determination and professionalism. I wouldn’t have the guts to strut around mostly nude in a room full of gaming nerds (or anyone at all for that matter). 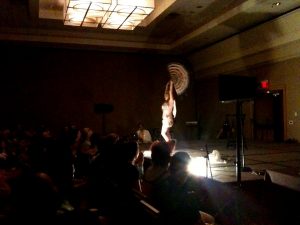 TOP 5 WAYS TO DRIVE ME INSANE AT A CONVENTION

BEST THING OVERHEARD IN A HALLWAY
As I approached the Exhibitor’s hall Saturday morning through the throngs of cosplayers, large kilted men, and those loathsome singing pirates, I saw a single older man hold up his hand and shout out an unusual question. “Who likes geography?” he bellowed to anyone who cared to listen. I’ve never before in my life experienced a place so large and so crowded fall so silent so quickly. Hordes of people lowered their heads, averted their gaze, and quietly shuffled past him. I think I even saw some individuals dressed as Altair or Ezio or Connor or fucking whoever from Assassin’s Creed use the opportunity to blend in with the shuffling crowds. A part of me felt bad for the poor, old dude for a moment. Then a woman dressed as Mad Moxxi walked by, and I forgot all about it until writing this.
CONCLUSION
I know I come off like some sort of curmudgeonly butthole with that list and that’s okay. I think a part of me is turning into just that. Especially when huge crowds are involved. But by the end of my weekend in Indianapolis, I came around to see the good side of conventioneering. There’s an undeniably palpable energy as gaming geeks the world over put on their most in-jokey t-shirts and converge on the American Midwest. Every year there are tons of new games to demo and plenty of classics to revisit. Food trucks and great bars surround the teeming swarms of gamers, and after eating there’s always another game to try. Plus, I got to meet the incredible artist Wayne Reynolds. I left the Indiana Convention Center with a free D6 in my hand after spending a weekend with some of my closest friends. That’s all I ever really wanted in the first place.