FLEET ADMIRAL (Castle Games)
Fleet Admiral is real close to being a great game. You’re building up your crew and loading components on to your spaceship as a galactic crisis looms on the horizon. What’s not to love?
Well, let’s start with what’s to love.
After you figure them out (more on that later), the rules to Fleet Admiral are fairly simple. Your turn starts by rolling an 8-sided mission die. You can fail or succeed automatically, but more likely the die will send you on a Crew or Component mission. You draw a mission card, see if its requirements are met by your spaceship, if they are, a second mandatory mission roll is attempted, and if you succeed at that you can choose to try a third mission to finish your turn. Easy and fun!
The unfolding galactic crisis is the most interesting part of Fleet Admiral, serving as a semi-cooperative mechanic. Once a player has upgraded his spaceship to a Level 3 Battle Ship, he starts playing crisis tokens at the beginning of his turn. The game is won by removing these tokens (and lost if too many pile up), but removing them costs won mission cards that otherwise could have improved your spaceship. It’s an interesting balance.
Finally, it bears noting that Fleet Admiral makes a surprisingly good single-player game. There aren’t too many games that play well solo, often just making players take on multiple roles, but the way Fleet Admiral is set up seems well suited as a more fun/nerdy game of solitaire. 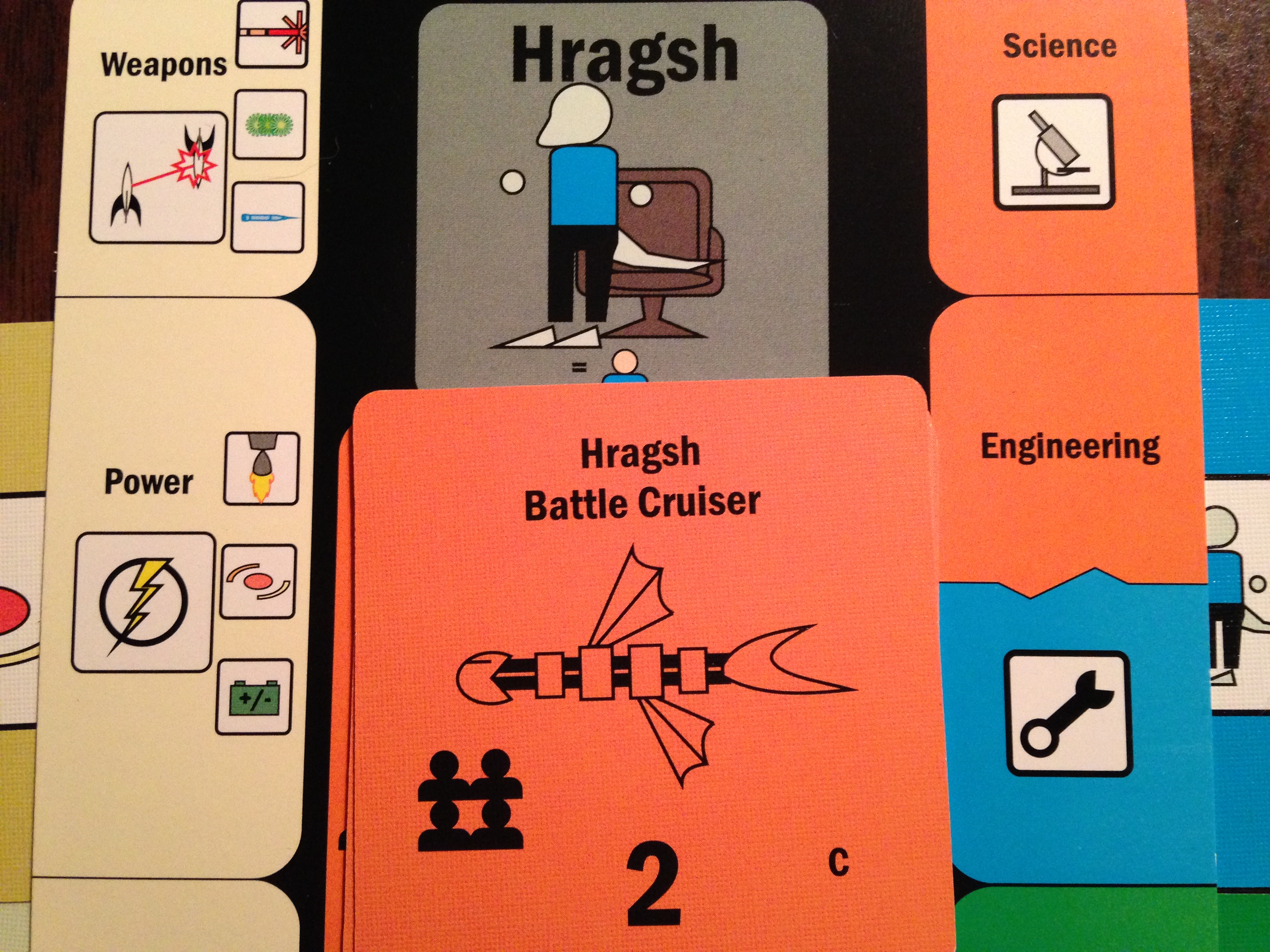 Now for what’s not to love.
While it’s not a long-playing gaming, averaging around 40 minutes, it does feel a little too long for its luck-to-skill ratio. Centered around the “push your luck” mechanic, going through multiple turns of rolling the fails or not being able to complete even the first mission can be pretty disheartening (and that was just in a two-player game). Maybe this could have been addressed with a limited number of “Captain’s Resolve” tokens that allowed you to succeed in a mission regardless of roll or requirements. Maybe event cards could be mixed into the Crew and Component decks to break up monotonous and disheartening failure streaks. There’s a really strong foundation of a game here… it’s just not fully put together.
Probably the worst thing about Fleet Admiral though is the rulebook. It took a couple of times of struggling through (not counting a time we’d set the game up and a few frustrated minutes later decided to go with something else) before things started making sense… and it’s not because it’s a complicated game. Unfortunately the rulebook is pretty unclear, organized somewhat counter-intuitively and lacks sufficient diagrams and pictures to serve as examples. It could be on me, but I’ve learned a lot of new games and none have really given me the amount of trouble that Fleet Admiral did. (Castle Games) by David C. Obenour