ESCHATON (Archon Games)
There is no hope left for this world. Fanatics and acolytes run the street. Civilized religion has collapsed into cults of primal fear and aggression. Monsters and gods awaken to loose havoc. There is no hope left other than to embrace Armageddon’s arrival. The end is upon us, brothers and sisters. Join me!
A deck-building meets dudes-on-a-map game, Eschaton bares a number of similarities to wildly popular deck-building game, Dominion. Players draw a hand of five cards every turn and use those cards to draw more cards or buy others. Players pick and choose the new cards added to their deck to create machines (ongoing chains of plays to maximize each turn) that grant them advantages or deny them to their opponents.
Unlike Dominion, cards also give the ability to draw from a special divination deck of demons, relics and more, and move and fight their pieces on the map. Using the map as a game board, players send their cultists out in an effort to gain control of territories end game values and in turn advantages. It’s as fun in gameplay as it is thematically, as you spread your horrible cult in a hope to win the most favor at the last judgment. 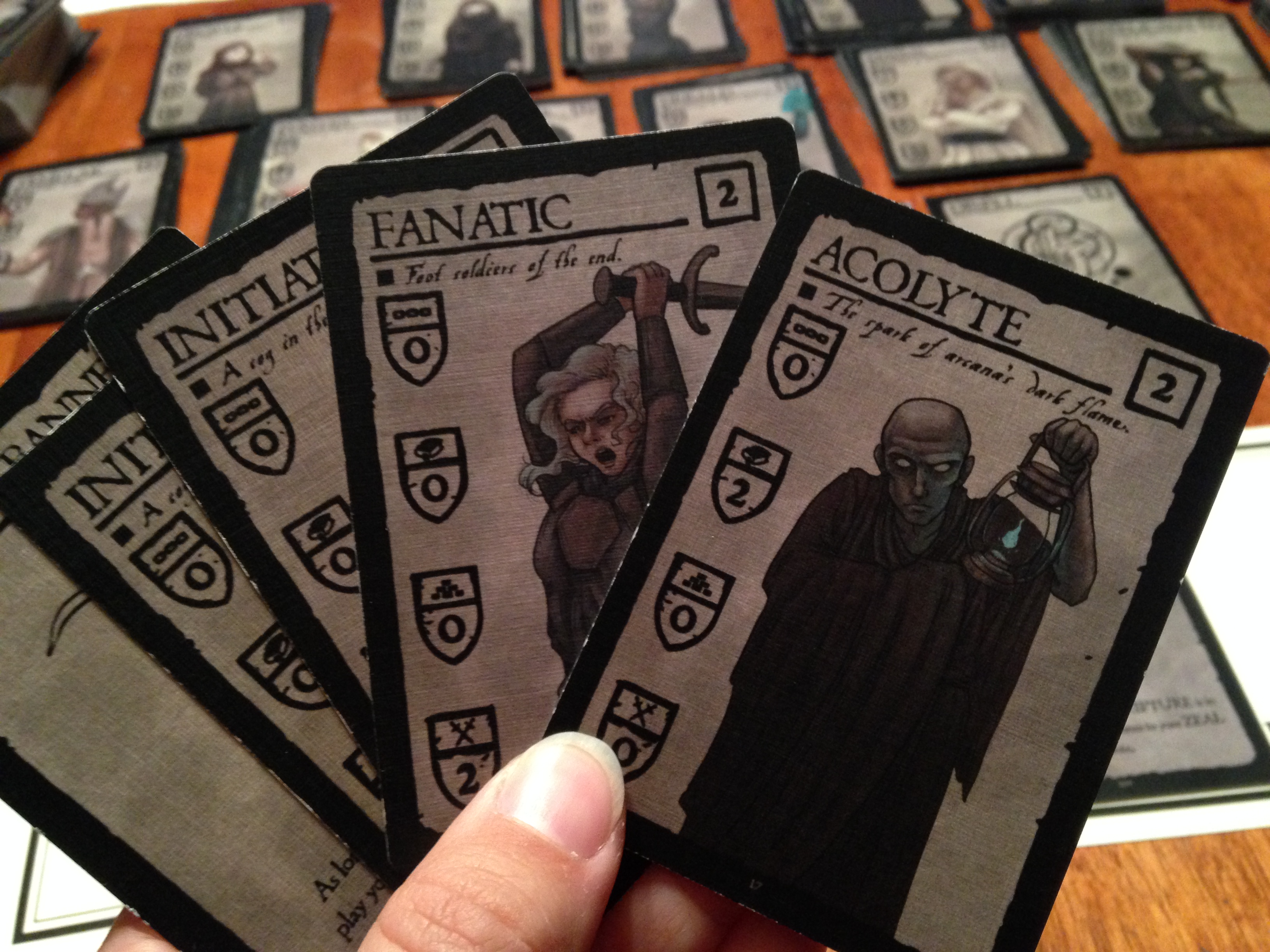 An aspect of Eschaton that more strictly strategic players might be frustrated by is the Events and Omens deck. At the beginning of the game three stacks of two Event cards are shuffled with an Omen card and a forth stack is shuffled with the Armageddon card that marks the game’s end. Stacks are combined and at the start of each round a new card is flipped. It isn’t the same shuffled 8 Events and 3 Omens either as those cards are drawn from two much larger decks of possibilities. The unpredictable boons and goals punish and reward with little or no warning. You may have just spread thin your cultists and now a foreign invasion forces you to remove one from each territory, you may have just marched to the island of The Old City only to have a plague break out there, an Omen of sacrifice may put your opponent in the lead through no prior planning on either of your parts.
However if winning the game isn’t the only reason you play, the Events and Omens deck is just another part of Eschaton‘s brilliant immersion into the volatility of a world on the brink of Armageddon. The theme is further established with an awesomely evil looking screen-printed cloth board and even darker card illustrations. The design isn’t always clearly indicative to the rules or gameplay, but it’s a small sacrifice in making a game that feels like the best metal album of the year.(Archon Games) by David C. Obenour