ESCAPE FROM THE ALIENS IN OUTER SPACE (Osprey Games)
Trapped in a badly damaged spaceship that’s plunged into a powerless darkness and is beset with aliens, you have no choice but to make a go for the escape pods. Whether or not they’re still functional, you’ll deal with that when you get there. Whether or not your shipmates can make it out too, that’s on them. The only thing that’s certain is that you must Escape from the Aliens in Outer Space!
Two to eight players are stranded in this situation for Escape from the Aliens in Outer Space. Half of you are humans, racing desperately to the escape pods, and the other half of you have been transformed into aliens, hunting down your former shipmates. Identities are unknown as the ship has been plunged into an inky darkness and all communication has been severed.
On both an alien and human turn, players secretly record a movement – end on a white space and it’s “silent sector” but end on a grey space and you have to draw a card. Cards either denote a stealthful move for “silent sector,” a fortunate distraction for “noise in sector (choose a space)” or a clumsy move for “noise in sector (the space you’re in).” Alien players are allowed to attack into squares, then exposing themselves as aliens for the rest of the game, and will consume anything they attack (killing another alien or assimilating a human player). The aliens’ goal is to eliminate all human players and the humans’ goal is to reach a working escape pod. That’s right. Working. Upon reaching the escape pod there are more tense moments yet as you draw from a deck of operating systems cards – one of which is busted. 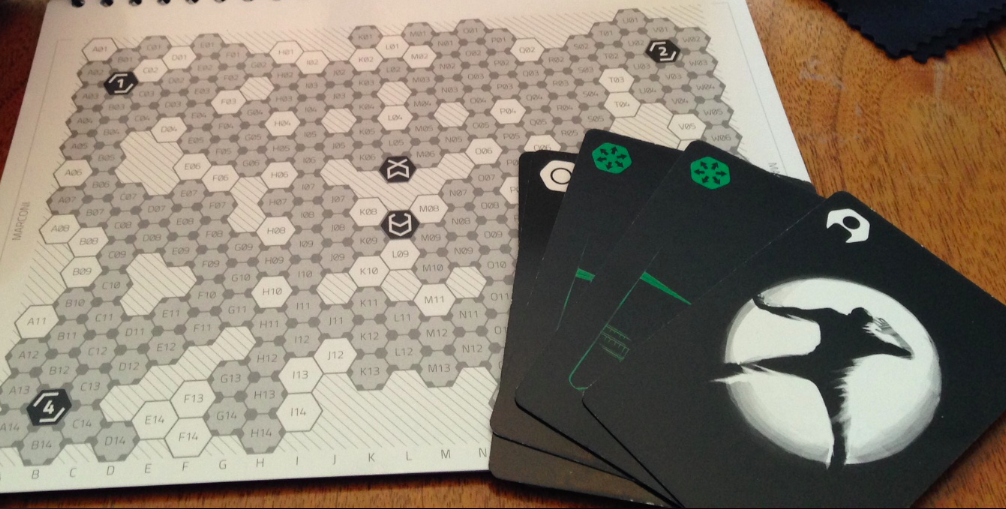 The rules also offer the addition of player roles with special abilities and items scattered throughout the card deck. After a couple of introductory games with the basic rules, these add-ons really expand how the game is played – offering harrowing escapes or fateful mistakes.
Escape from the Aliens in Outer Space was both associating gaming editor, Kris Poland and my favorite game from Origins and getting a few more plays in didn’t change any of our thinking on the game. It’s brilliantly simple in its rules and captivating in its tense game play.
Starting as a print and play game, you can still download a copy for only $1.49 from the game’s website (though Osprey’s Ultimate Edition is definitely worth the $40), as well as utilize their editor to design your own maps and make use of other players suggestions on rules variants. The online community seems to have dropped off over recent years but here’s hoping Osprey’s new edition spurs creative minds back to the internet. This is a great example of what a game can be in 2016. (Osprey Games) by David C. Obenour

Tags: board games, Escape from the Aliens in Outer Space, Featured, Osprey Games