Epic Death lives up to its name by setting 2-5 players at the head of a D&D styled party of adventurers, hell bent on achieving – yup, you guessed it – epic death. This can come by many ways, slaying dragons, jousting mythical knights, but hopefully nothing as embarrassing as falling out of a tree while rescuing a cat.
Much like the great card game Gloom, the goal in Epic Death is to heap as many points on your party’s adventurers before you or your opponents have them killed – the only time at which their points count towards your end game total. Unlike Gloom, thematically what you’re collecting is the spoils and glory of successful quests and the unshakable shame of coming home empty handed.
These quests are separated into three categories of toughness – trivial, mighty and exalted – where success is achieved on rolls of 4-6, 5-6 and 6, respectively. Players can help their chances of success (and hinder their opponents) through Fate cards, representing the will and wrath of the gods, that add dice, allow rerolls, place adventurers at risk of death or can even resurrect them. Turns go by quickly and the stakes increase as the quest deck leads way to the epic quest deck, offering more glorious but more deadly missions (that also helps to speed the game to a conclusion). 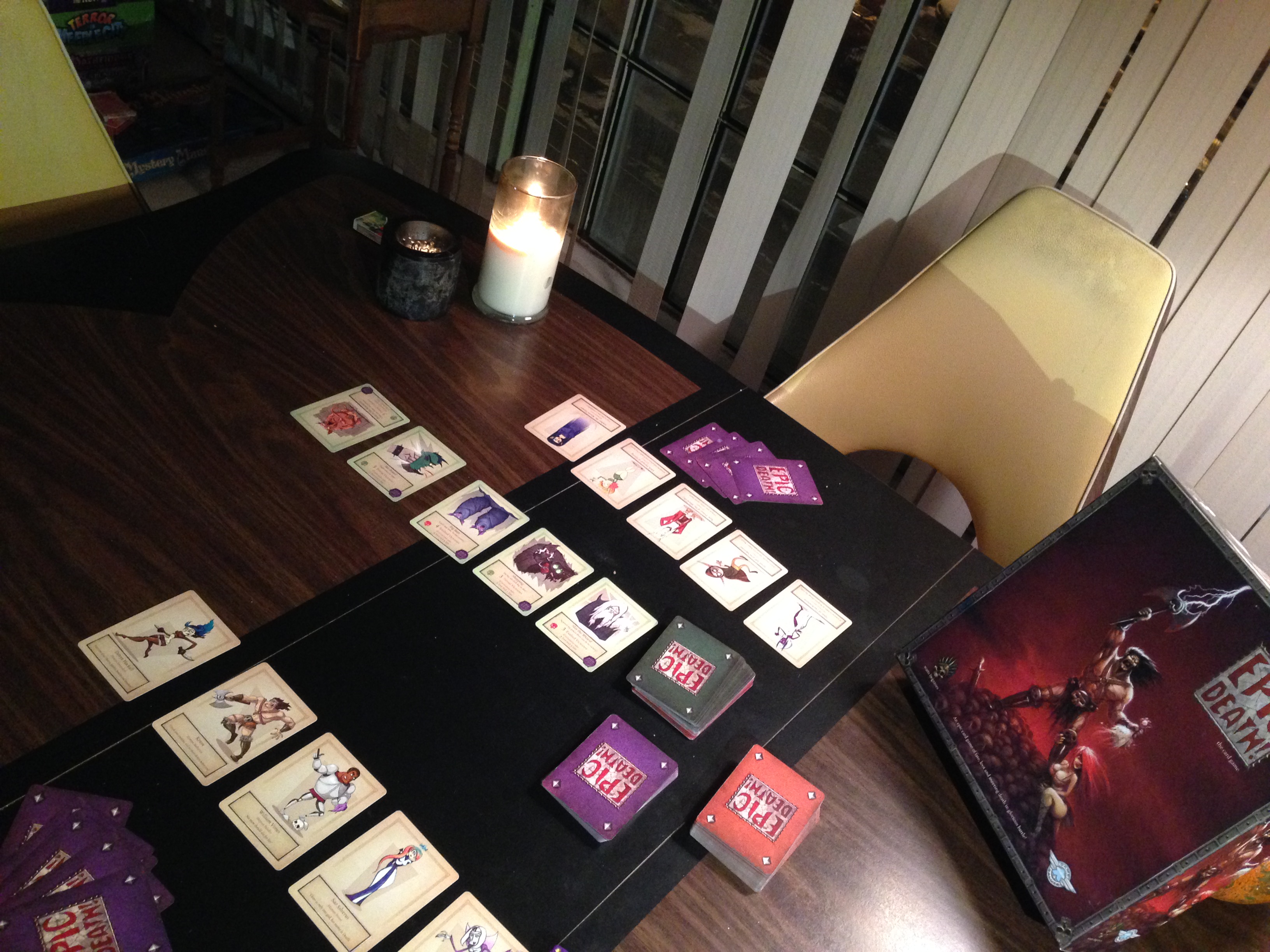 The only complaint might be that the game doesn’t offer a lot of player specialization. All of the starting factions (elf, dwarf, human and orc) function exactly the same, as do all of your party’s adventurers (thief, necromancer, shaman, engineer, etc) and loot only offers points without any in-game advantages. Working in a few small mechanics that address races, classes and armor and weapons with certain bonuses or handicaps, might have been a nice touch but might also have burdened the game with additional mathematics and rule checking.
[EDIT: It looks like Game Salute is one step ahead of me! Check out the Kickstarter for Epic Death’s first expansion – now with adventurer and loot bonuses.]
Ultimately, Epic Death’s charm lies in its simplicity. Dungeons & Dragons: Wrath of Ashardalon or Pathfinder Adventure Card Game, this is not. Thirty minutes of back-stabbing card play and finger-crossing dice rolls for weekend warrior joy is what’s both promised and delivered. (Game Salute) by David C. Obenour