DEAD LAST (Smirk & Dagger)
MR. PINK: C’mon, guys, nobody wants this. We’re supposed to me fuckin professionals!
JOE: Larry, I’m gonna kill him.
MR. WHITE: Goddamn you, Joe, don’t make me do this!
JOE: Larry, I’m askin’ you to trust me on this.
MR. WHITE: Don’t ask me that.
JOE: I’m not askin’, I’m betting.
Down to the colored aliases, Smirk & Dagger’s Dead Last gets you in all of on the action of Reservoir Dogs iconic mexican standoff scene. Deals. Desperation. Double-crossing. Double-double crossing. Double-double-double crossing. You get it.
The rules are simple. Four loot cards of unknown value are up for grabs every turn, but there are a lot more than four of you grabbing. On each turn, players spend about a minute and a half or less deliberating on how things are going to go down. After time is up or minds have been made, everyone reveals who they choose to go after. Only the players in the majority-voting group survive that round… unless whomever they went after knew it and played an ambush card. The group continues to whittle down this way until there’s only one or two players left. If one player makes it, they get all four loot cards. If two players make it the game heads into “final showdown” where the pair decides whether to share, try to steal or just grab one and go from the loot. The first player to 25 points of loot (or 24 in a 10-12 player game) wins. 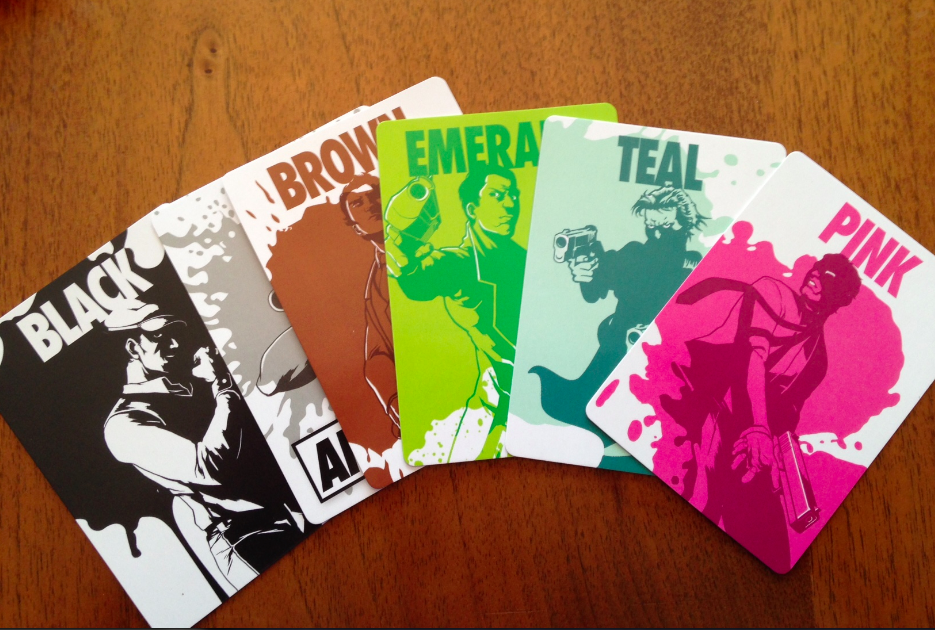 What isn’t simple is that tense minute and a half or so of interaction each round. Dead Last encourages you to scheme by whatever means necessary – kick feet under the table, send out a text, catch an eye and give a wink, find creative ways to repeatedly fit PINK into your conversation – whatever gets you in the majority without letting your victim know. The ambush card is a great twist as it never lets any player be overtly victimized. However, if you do play the ambush card and weren’t the one people we’re gunning for, you’re out.
Though party games that encourage improvisation on the players’ behalf sometimes reveal a case of incomplete or lazy game design, Dead Last thrives in its looseness. After a few rounds, players will start to pick up on ways to secretly communicate votes, but then so will other players and new ways will have to be devised. It might not be the best game to play with thinner-skinned friends, but this is definitely an easy to pick up, fast and fun party game. (Smirk & Dagger) by David C. Obenour