DayCon, February 18 at Rona Banquet Hall
by Josher Lumpkin
“H.G. Wells wrote the first miniatures gaming rules, called Little Wars.” Randy Miller says enthusiastically, even manically.
The event Randy had been working on for the better part of a year, DayCon Game Day 2017, was about to finally go down, and he had reached the point in convention prep where the only thing he could do was liberally spout factoids about mini gaming.
“So the whole ‘tin soldiers’ kinda thing—where they were pouring tin into molds, and that was a play toy for kids—that whole thing morphed into H.G. Wells saying, ‘Hey what happens if we made some rules and we played it with these on the living room floor?’”
You couldn’t meet a nicer guy than Miller, and does he ever know his stuff. He’s the kind of person you could just listen to talk for an hour.
“And so over the 20th century it really evolved into quite the hobby in the U.K., and they have a very strong gaming community there.” He continues, “Here in the United States, Dayton happened to have a nexus of gamers, but also guys who were willing to start casting miniatures and selling them. So that obviously created a community of gamers. That’s how I got exposed to it.”
“There’s a tradition here,” Randy says. “In the meantime, though, circumstances have changed. New generations have come in. It’s the golden age of the board game.”
Randy and his friends, who mostly play huge, table-sized battle games, wanted to put on a convention where tabletop enthusiasts of all types could bust on a table, regardless of what they get off on.
Turns out, he didn’t have to worry much about attendance at DayCon.  The show went off without a so much as a hiccough, with a good turnout, and people chucking dice on all kinds of stuff, from RPGs to historicals and tacticals, to games board and card and even euros. (Okay, those people were pushing cubes). 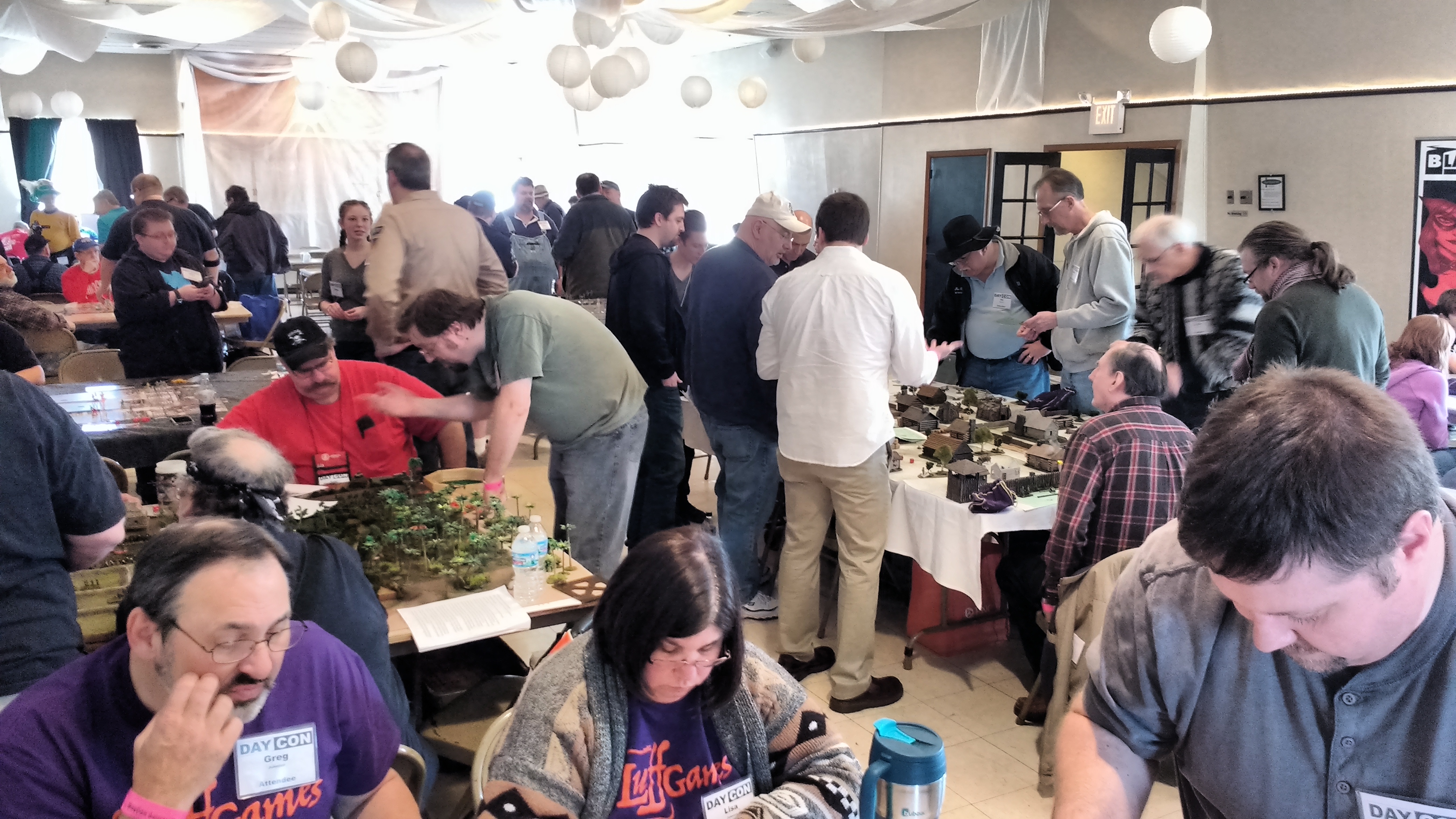 DayCon had all the fixin’s of a hometown con. There were games of every conceivable genre and subgenre. Still, DayCon stayed true to its purpose, which was to hopefully attract other types of gamers to historical miniature war gaming and make HG Wells proud for once and for all. I mean, beyond that whole War of the Worlds thing.
I think Wells would have smiled upon DayCon. Every U.S. military conflict of the last 300 years was represented there. And many non-US military conflicts, too. (Like anybody gives a shit about those.) 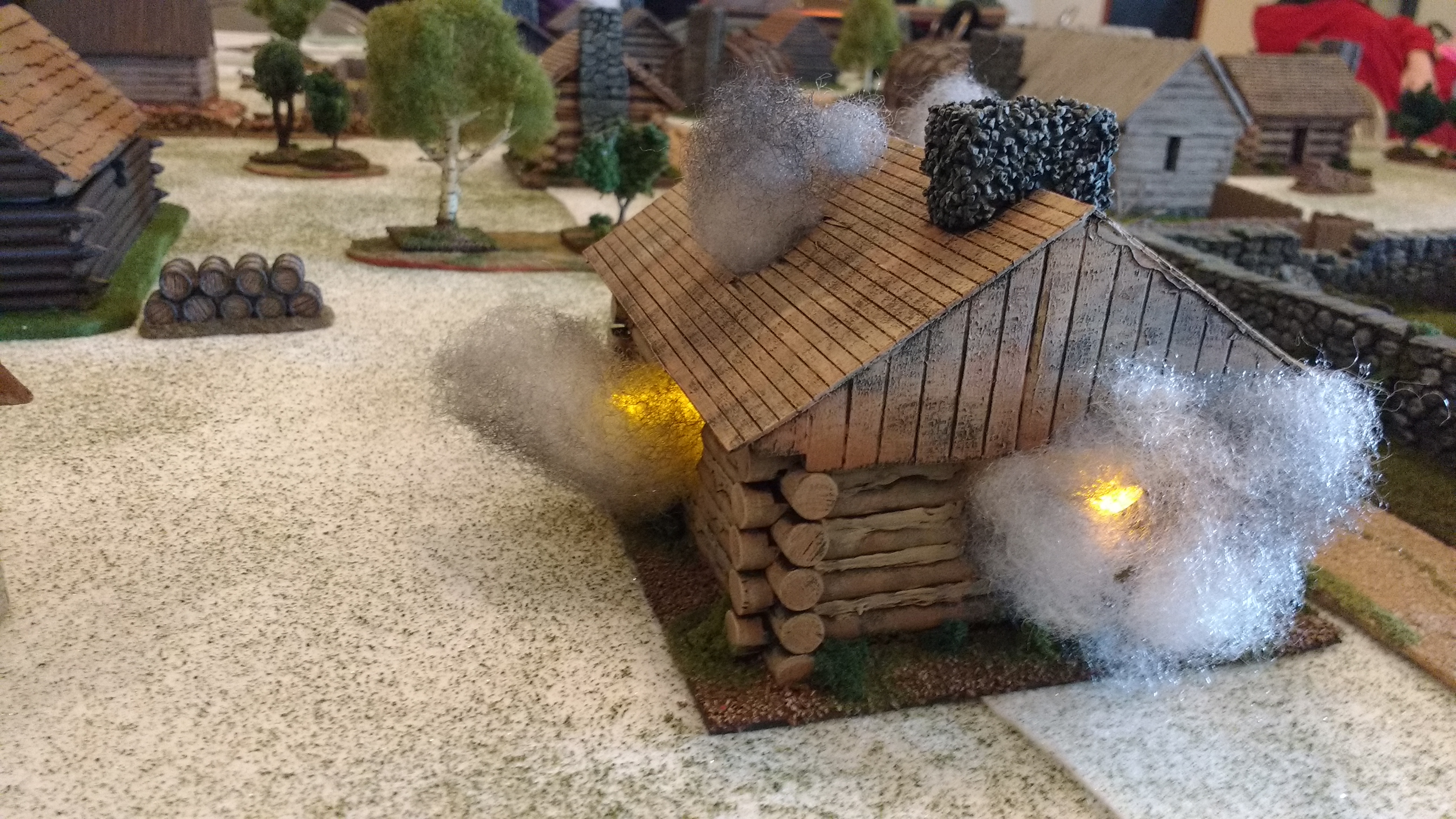 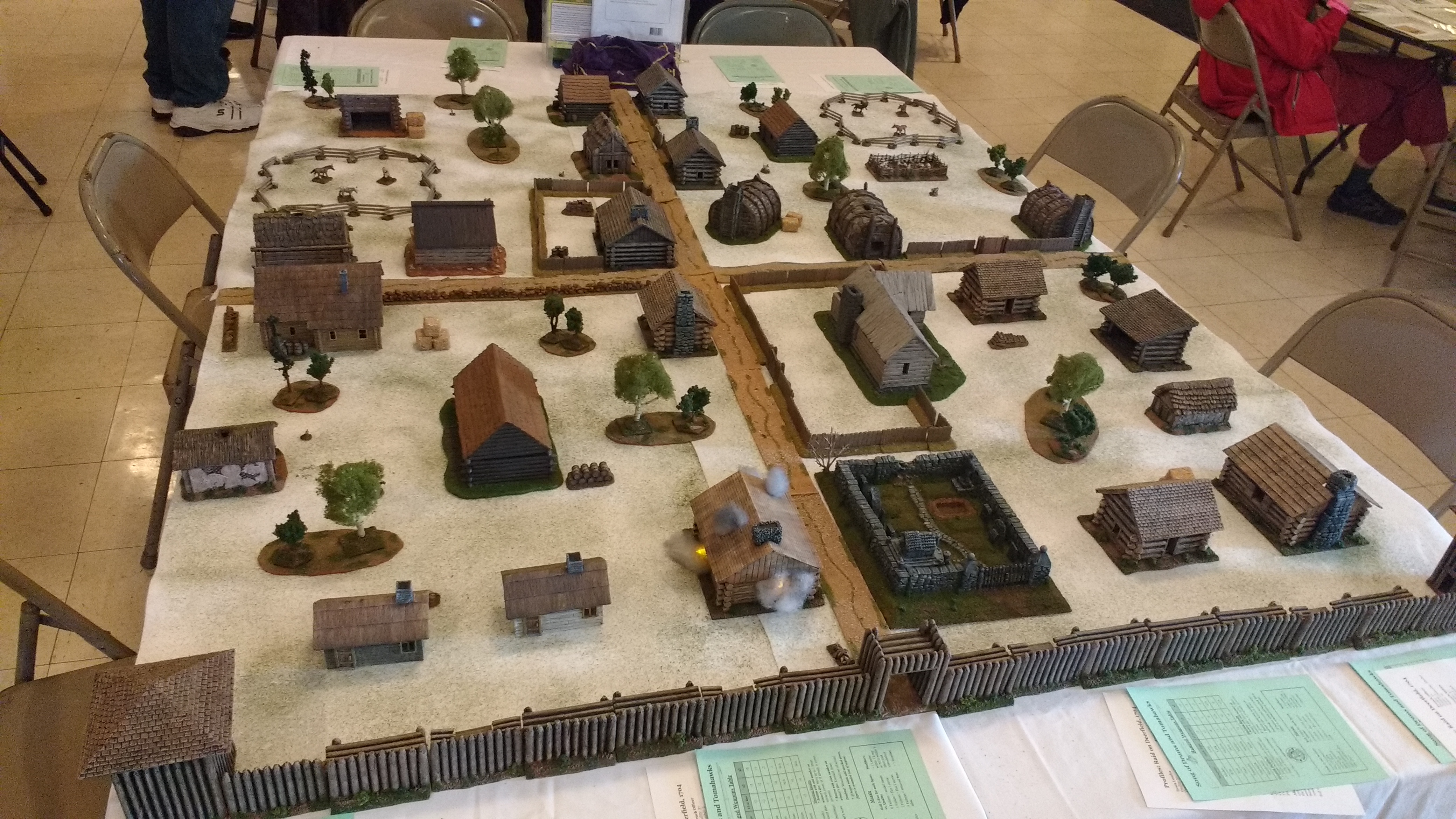 I found some real-life Vietnam veterans playing a cool-looking Vietnam mini game, and wondered if they found it somehow therapeutic. I should have asked those guys. 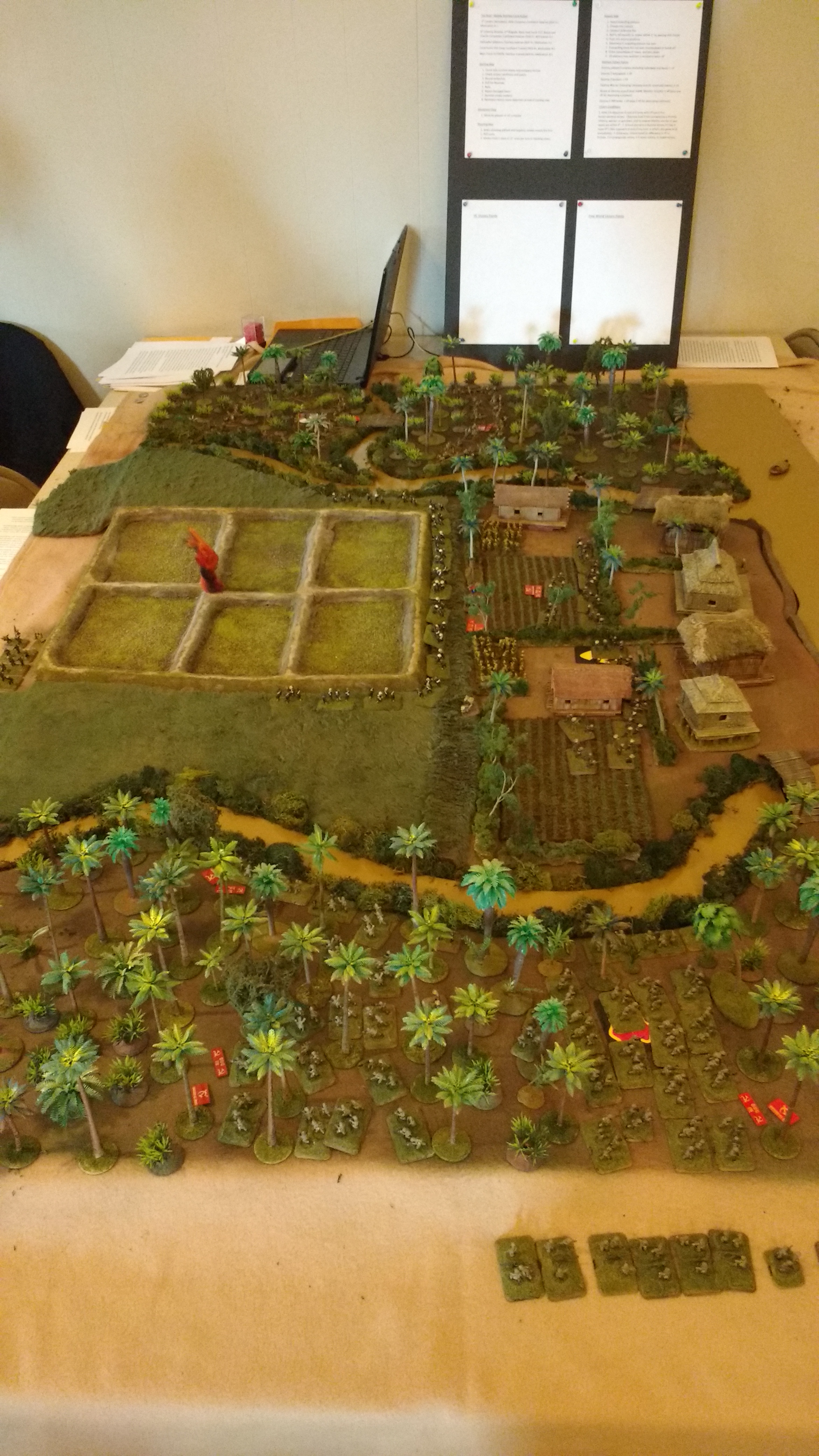 Of course, some gamers prefer their battles to go down between fantasy races, instead of real-life military conflicts. There was plenty at DayCon for orc-and-dragon crowd to feast their eyes at! 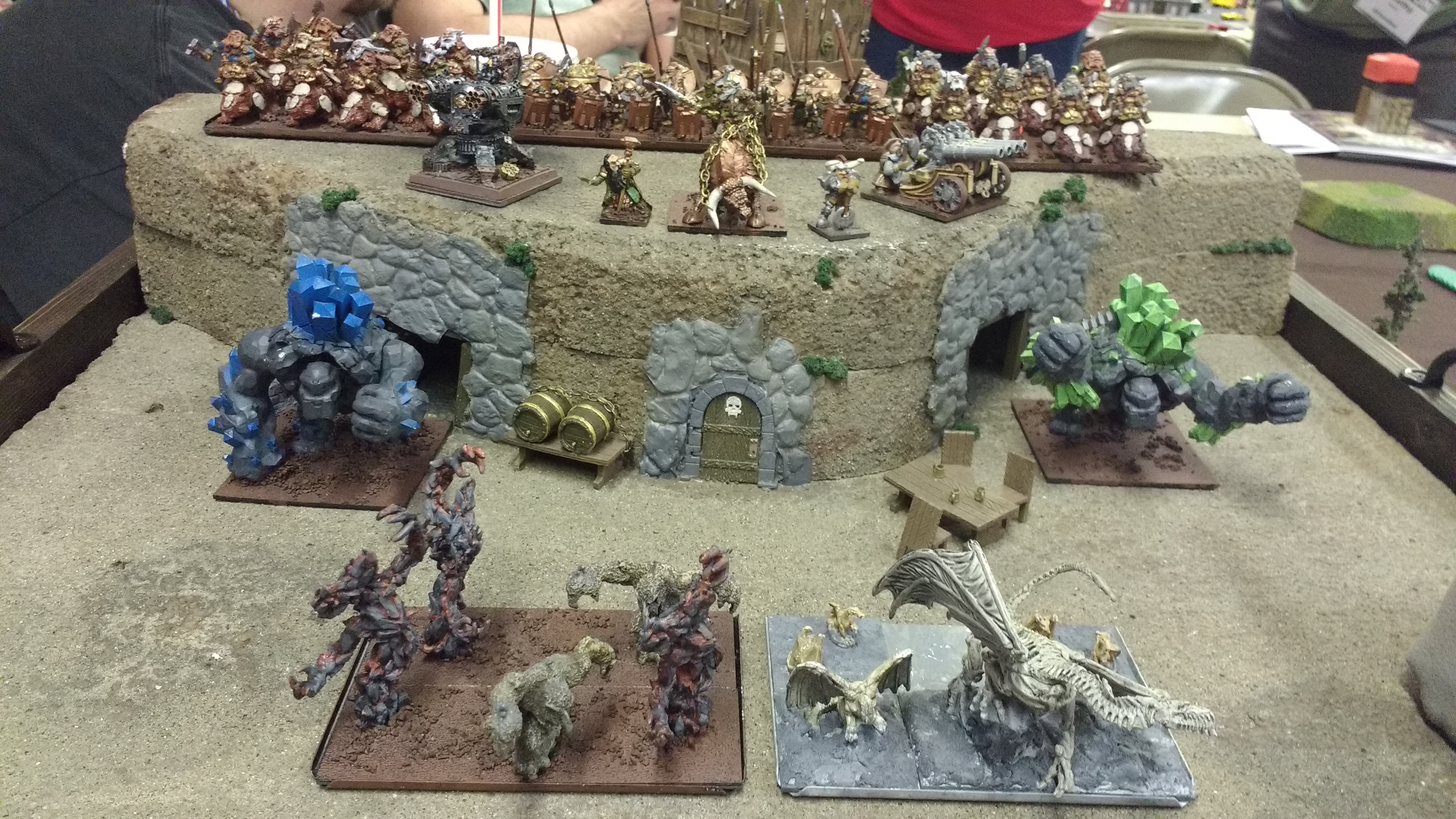 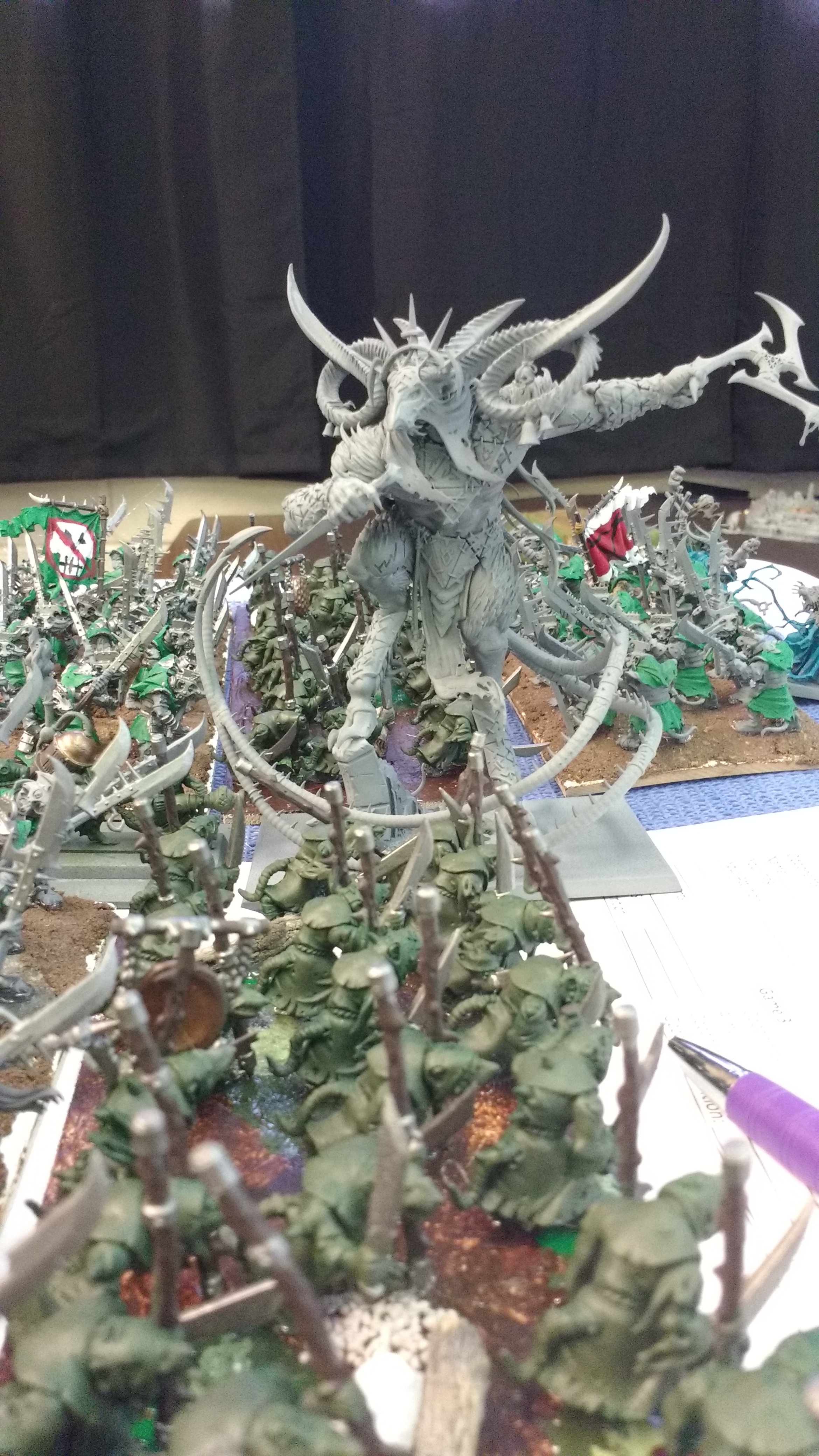 One person had built a massive table to represent the surface of the Death Star. They were playing Star Wars X-Wing, reenacting classic trench battles from Episode IV. The attention to detail and impressive. The guy told me he built it sturdy, “so fat guys like me can lean on it!” 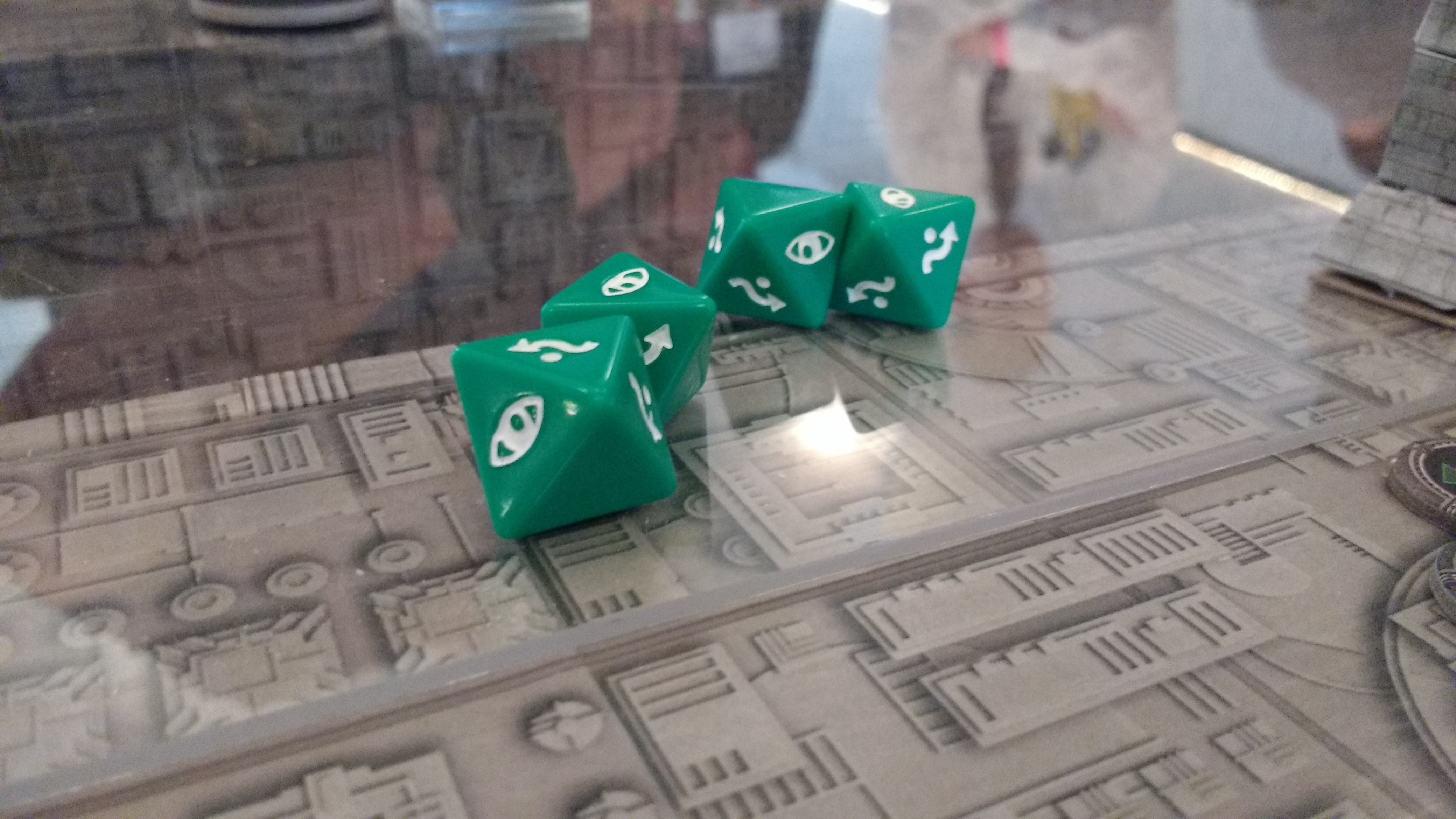 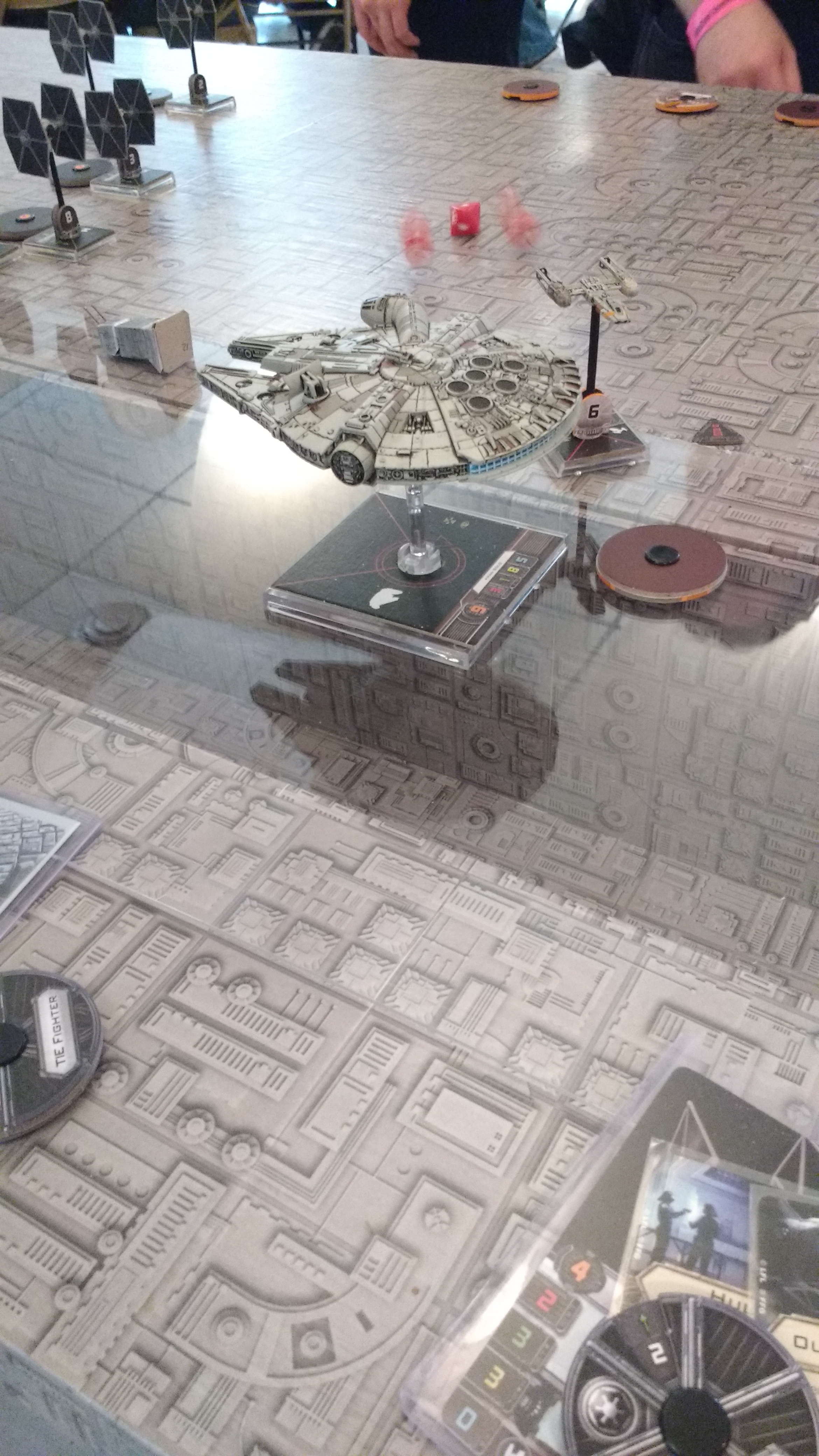 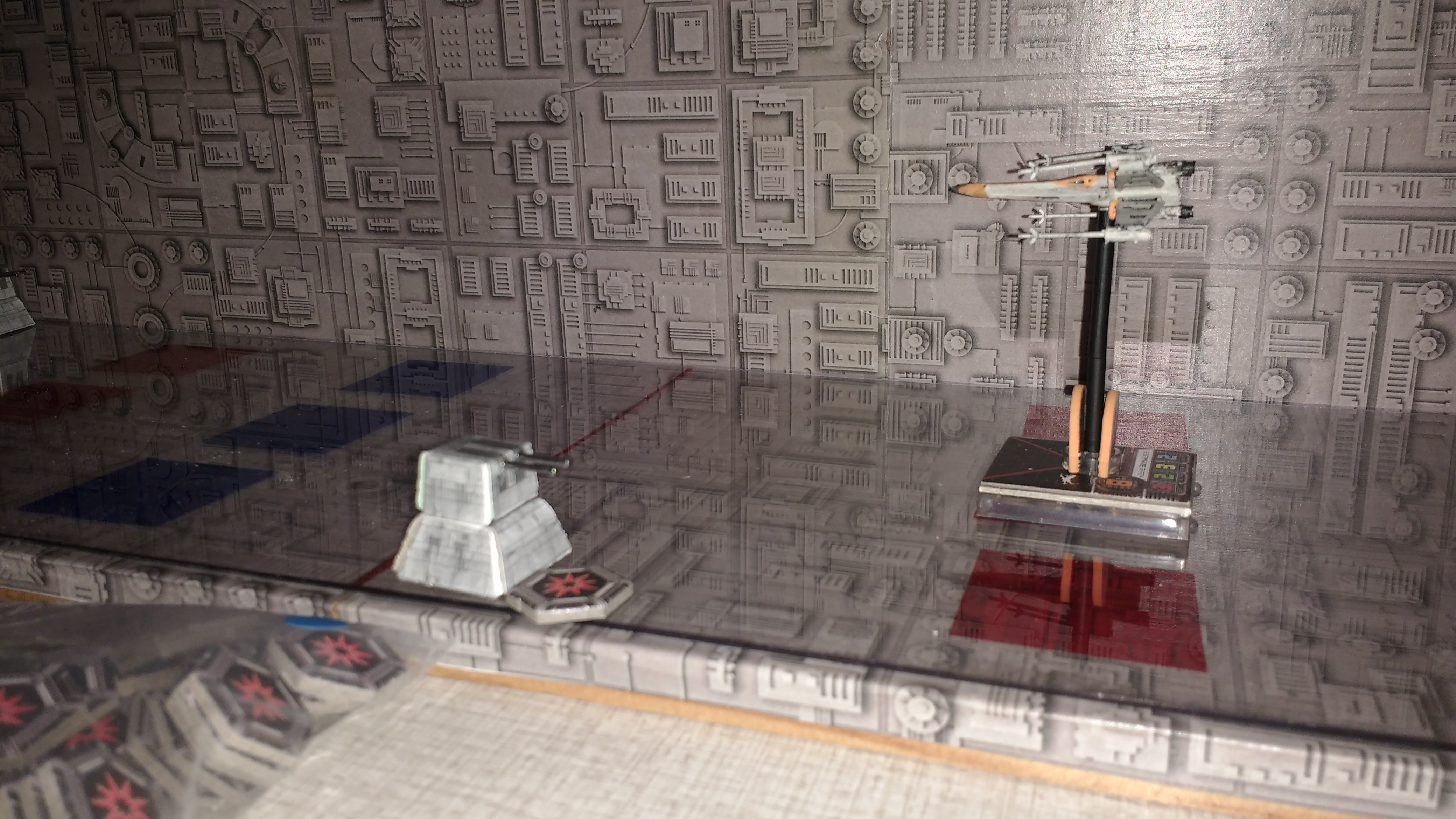 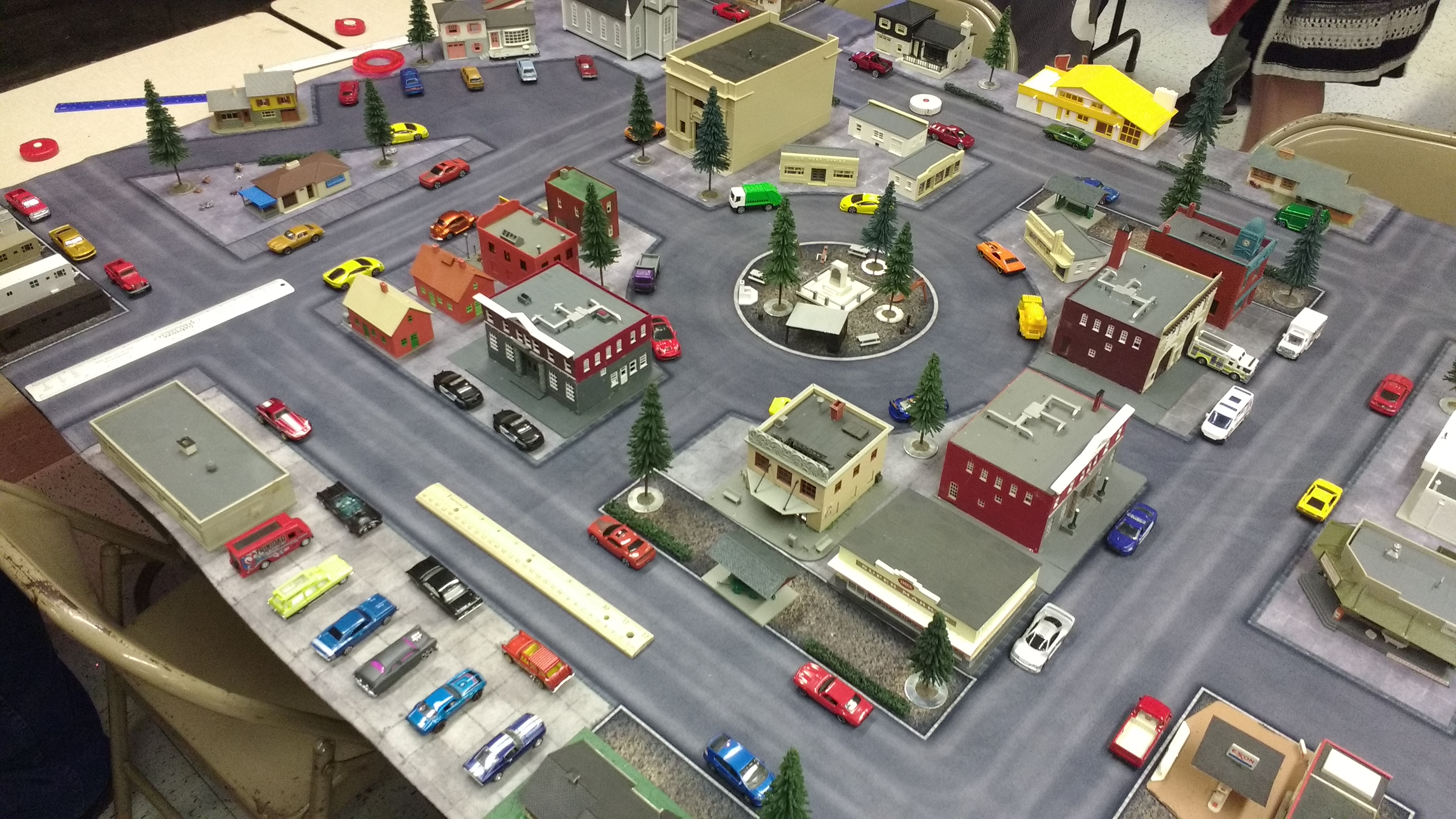 I think it’s called “Hotwheels with a Ruleset.”
It was a gorgeous day outside, so of course, I had registered for long, boring euros. The belle of the ball was a gorgeous economic board game called The Gallerist, where the players use a simple worker placement mechanic to discover artists, take contracts, self-promote, and other actions. The victor will have a high reputation score and an appealing gallery. The money is the victory points. 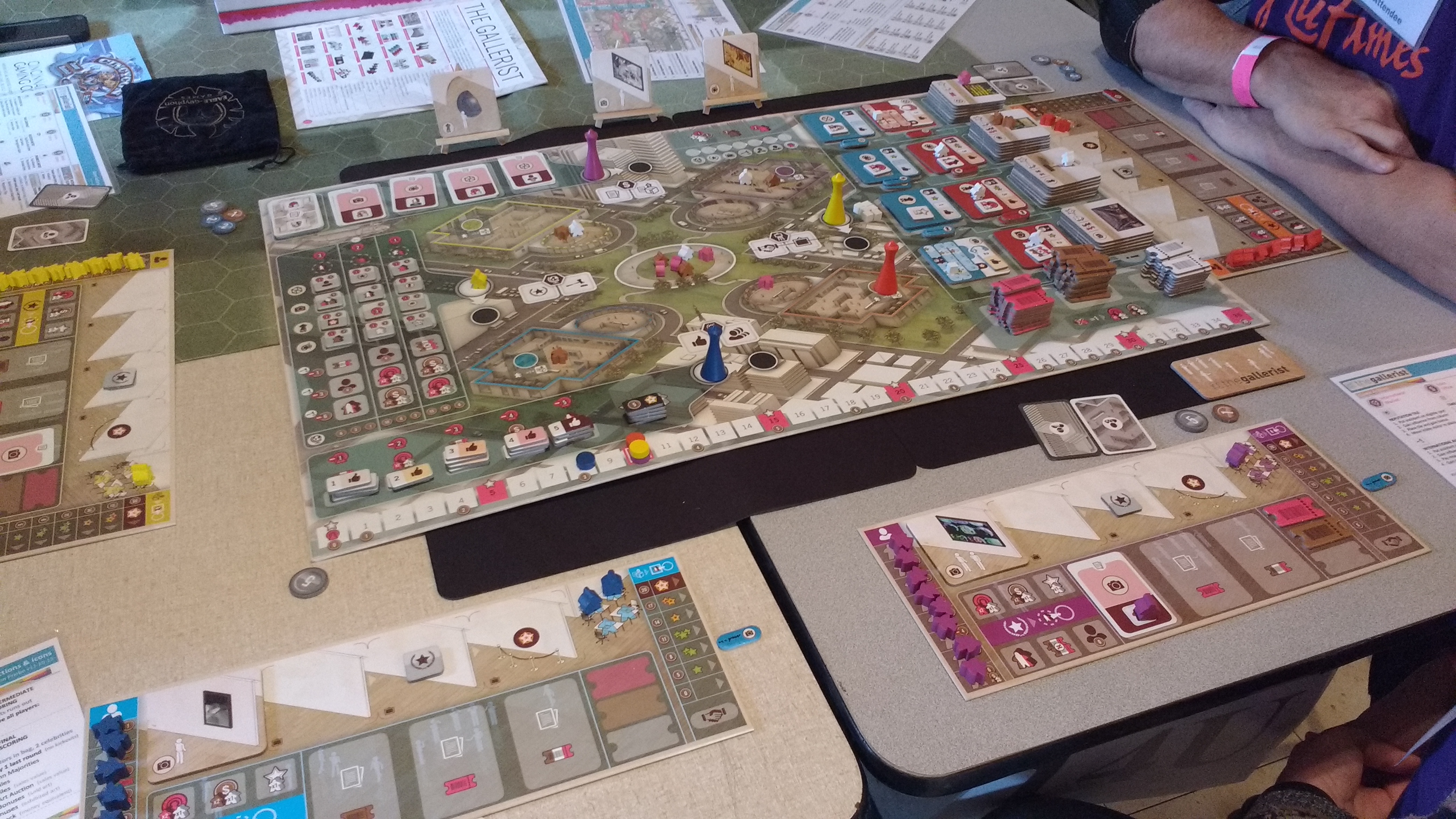 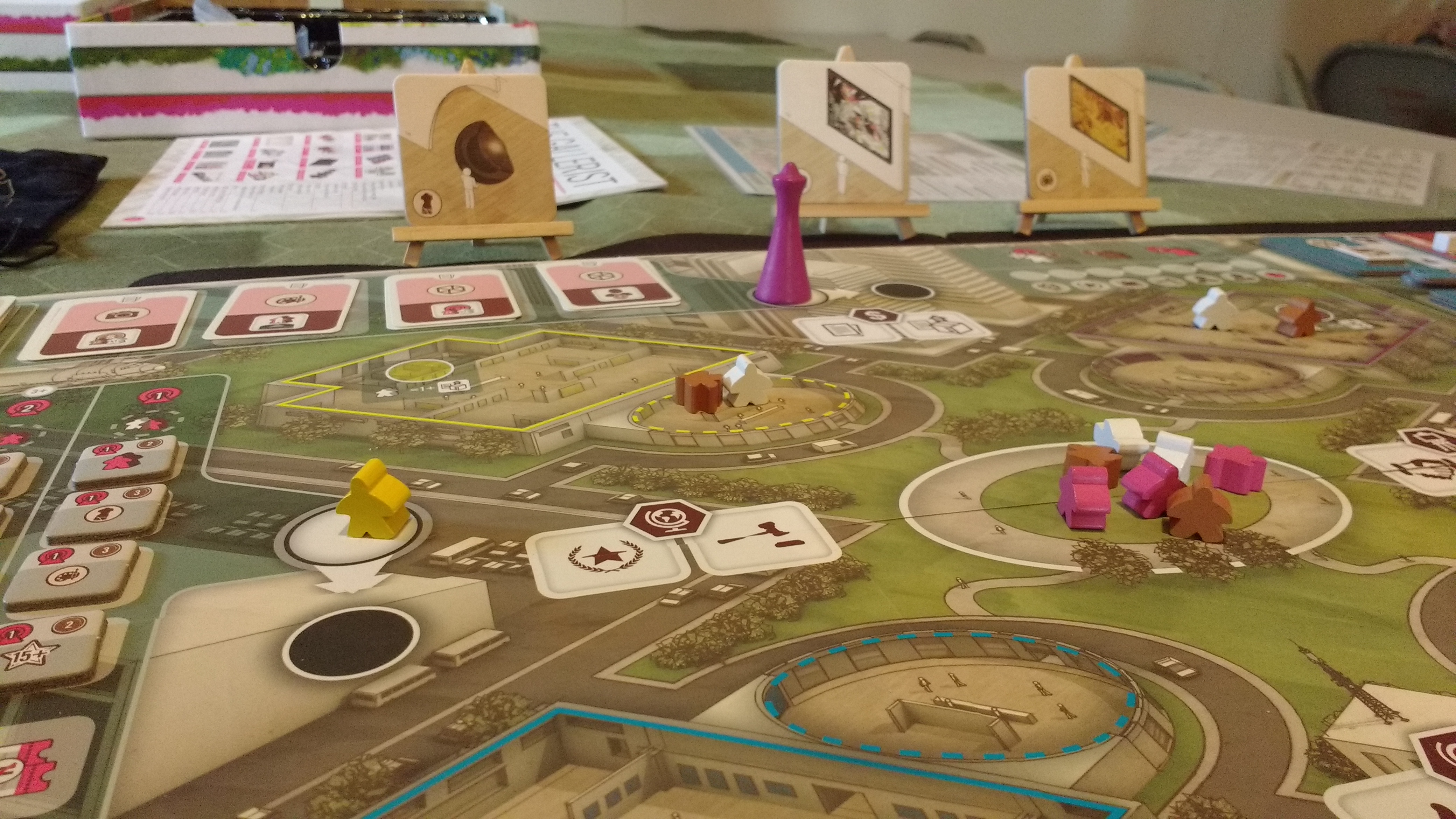 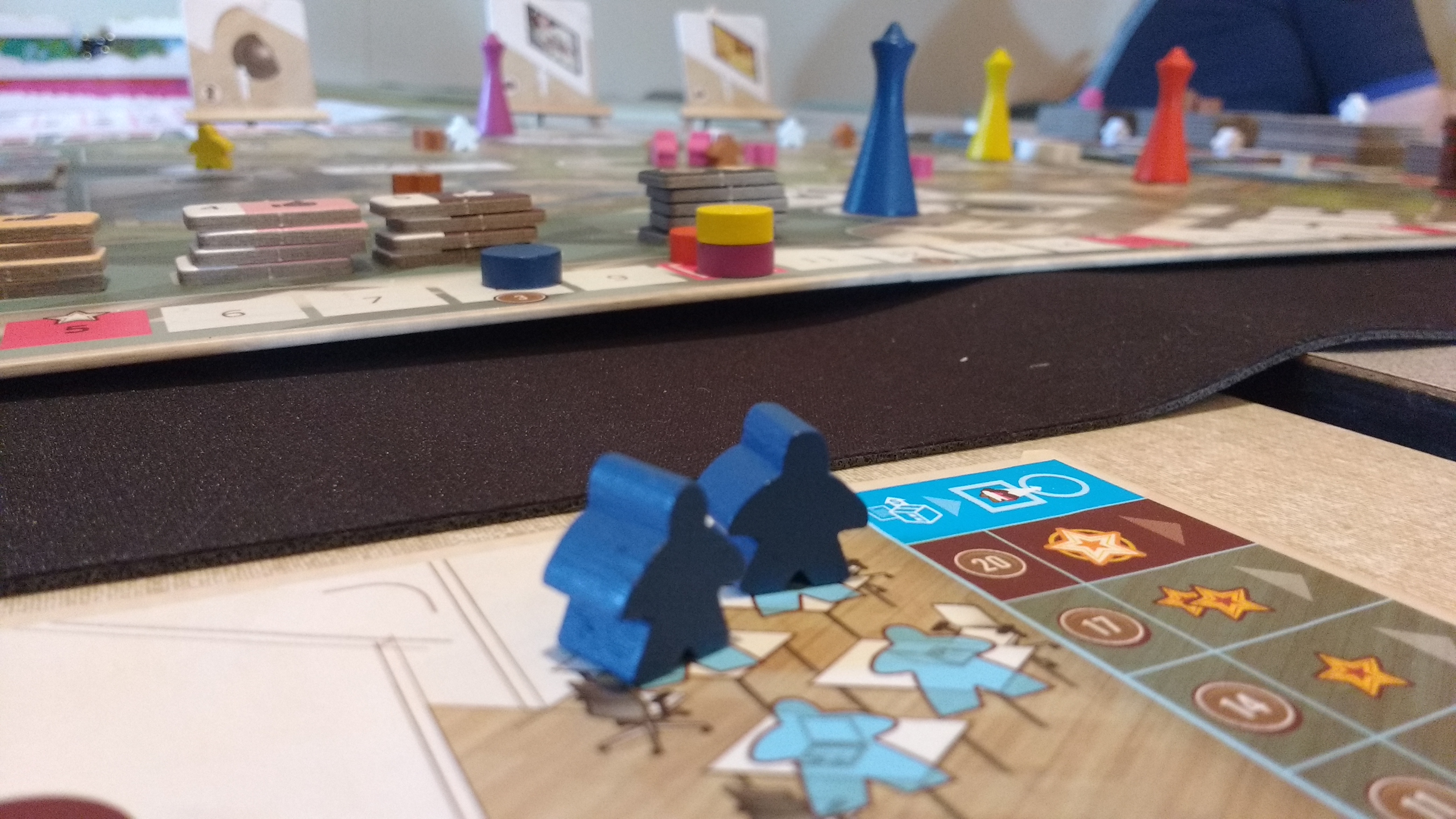 I lost my ass off, but it was fun AF.
Many game creators local to Dayton were at DayCon showing off their wares. The developers of the games Robot Rise, Galatune, Bellum, Daikaiju Director, and the role-playing game Cold Steel Wardens were all at DayCon, teaching people how to play. Here are pictures of two of them, Bellum and Cold Steel Wardens. 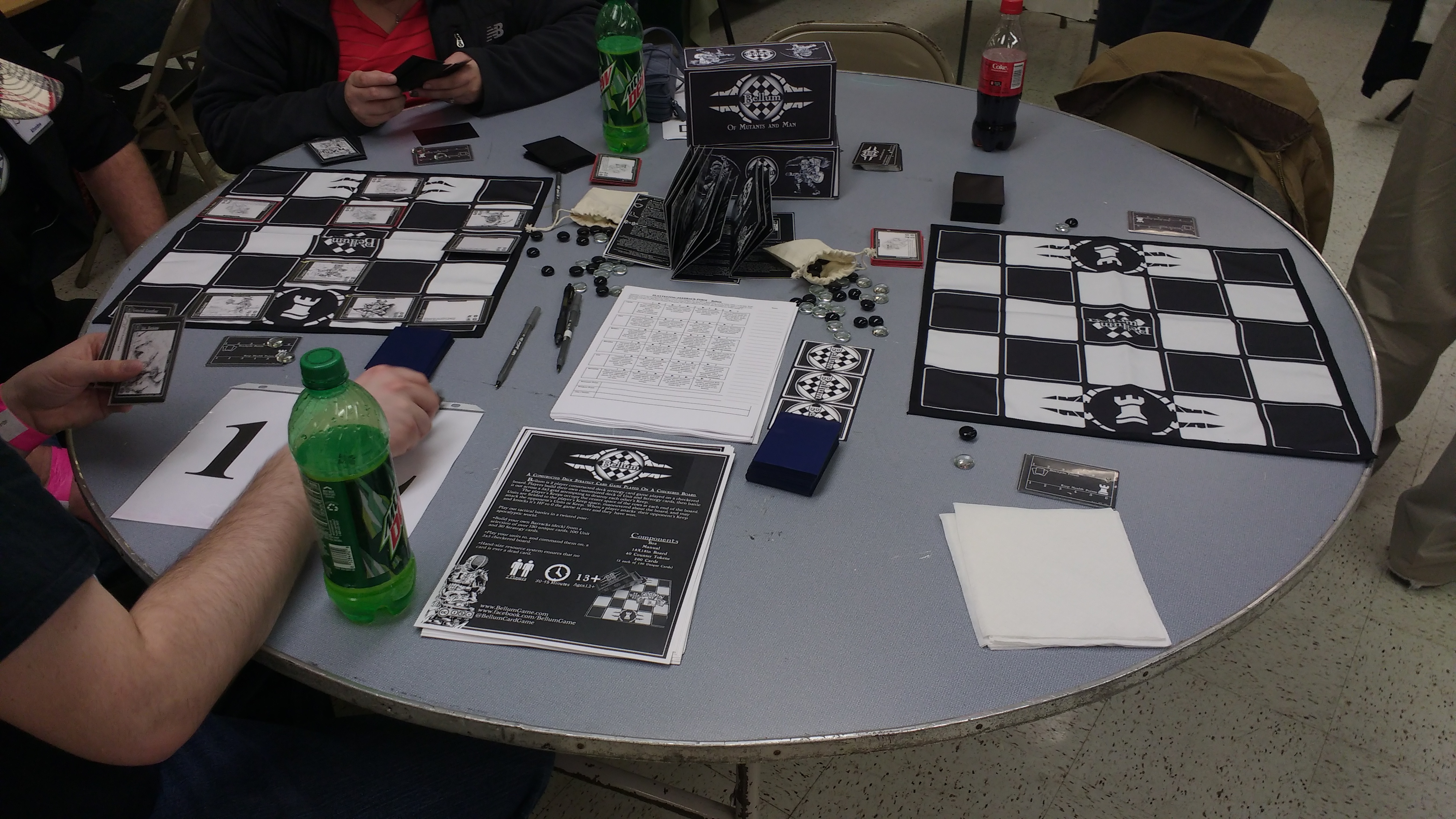 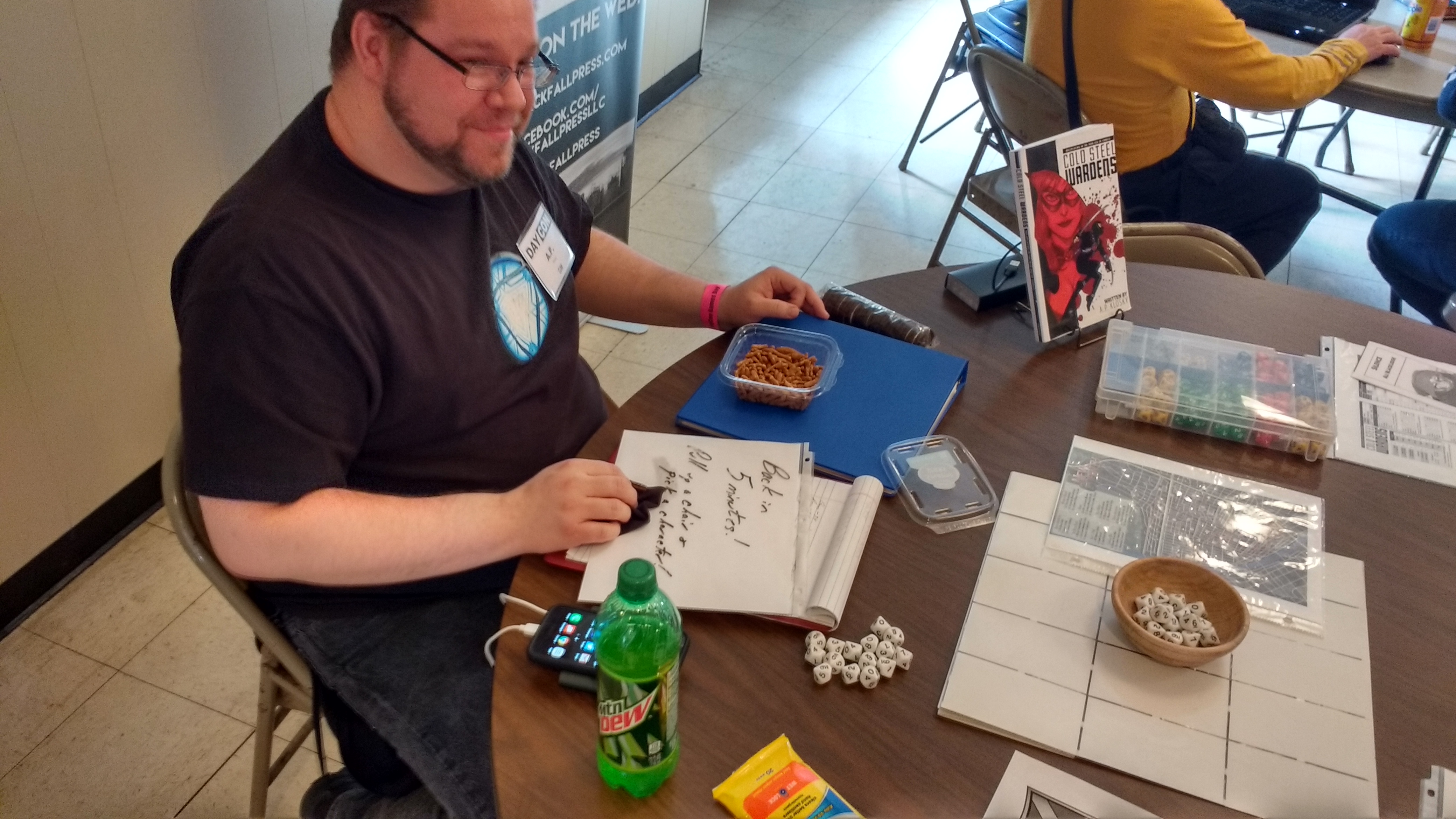 The people at DayCon were super interesting and welcoming. This guy had a cool hat! 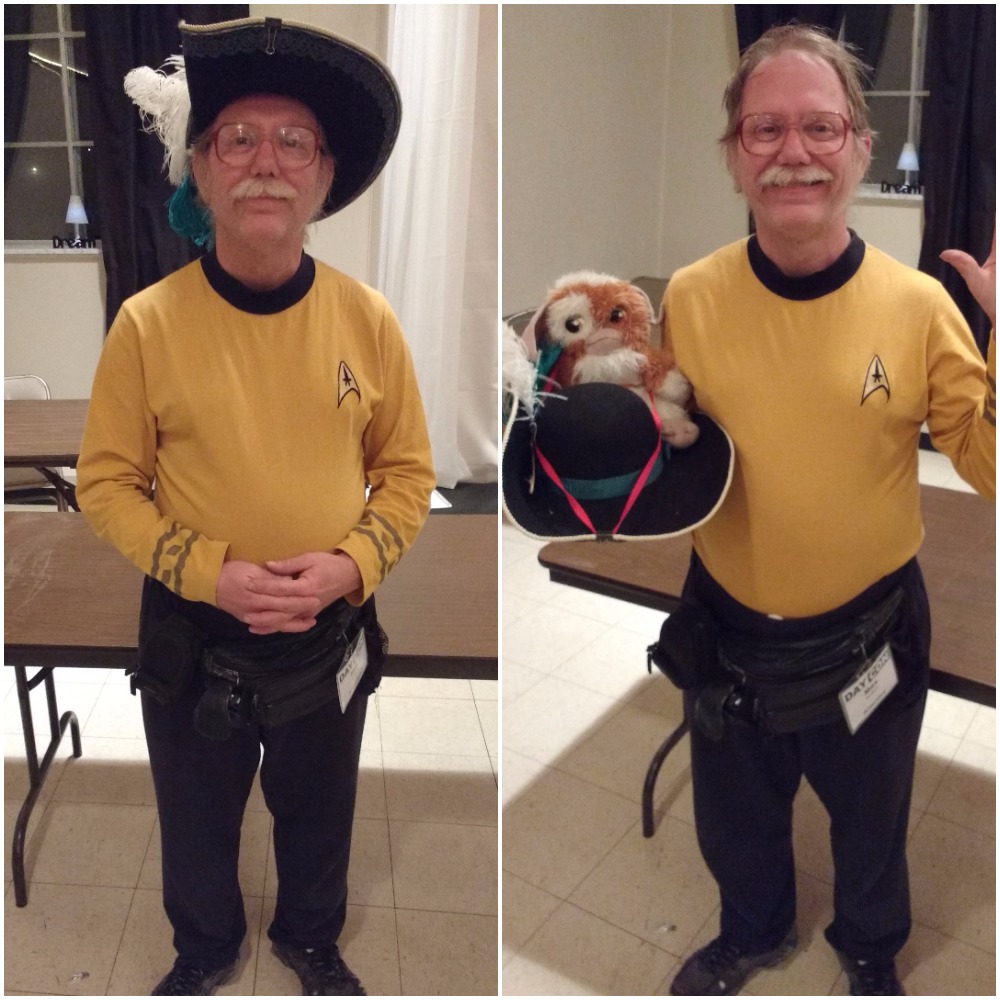 I accidentally called the Mogwai a “Gismo” like some kind of idiot.
To round out the day, I taught 6 people how to play Lords of Waterdeep with the expansion. 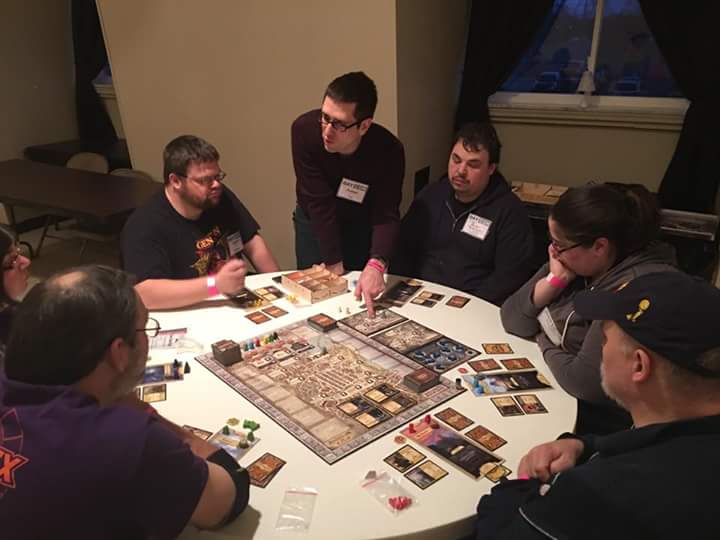 It was a really great day with a lot of incredibly cool and fun games going on. I can’t wait until next year!
http://www.daycongaming.com/