BOOTLEGGERS (Mayday Games)
I want to start off by saying that Bootleggers is a really great game, but it’s also one that your gaming group may not survive. If winning is what you’re playing for and if not winning sometimes leads to sore feelings, look elsewhere or Bootleggers might be the last time you ever get together.
Now if you’re fortunate enough to have a friendlier group of gamers, who put playing over winning, Bootleggers is an incredibly fun game of dirty criminal deals enforced by thug muscle. Going into a game and realizing that it’s going to be a mess of good and bad deals can really open your mind to all of the nastiness that follows. Of course you can try to play a civilized game, but there is a saying about where nice guys tend to finish.
Taking on the role of Prohibition Era bootleggers, the game last for 12-years (rounds) and takes about an hour and a half. Each round is broken up into six phases that get the whisky from the stills and into the speakeasies. Turn order is determined by numbered muscle cards, split into four ranged decks and evenly dealt from at the beginning of the game. After that turn’s playing order has  been established, the round proceeds with acquiring Men of Action cards or more trucks, sending out the boys to gain influence at the speakeasies, distilling the whisky, delivering the whisky, selling the whisky and starting in turn four, sending out the copper to that turn’s highest producing still. After a round or two of getting used to know the rules, play progresses smoothly – only held up by the offers and counteroffers (depending on your group you may want to establish a time limit). 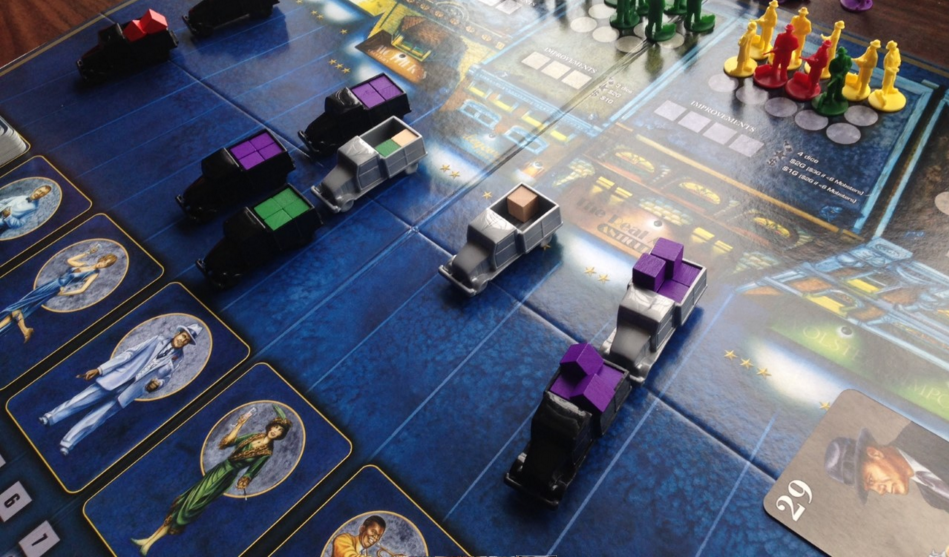 A further consideration for the “putting playing above winning” category is that Bootleggers is driven by a fair amount of luck. Each turn whisky production and speakeasy consumption are determined by rolls of dice, plus if you have the copper on you a roll of 5 for production empties all of your still for that turn. The balancing mechanism is that whoever is perceived to be in the lead is more likely to get ignored or screwed on deals. For as many games that talk about outside of rules-defined player dealing, Bootleggers really thrives on player’s business finesse and shrewdness.
Mayday also recently released The Boardwalk, an expansion that allows players a slightly more “legit” way to make loads of dough. As soon as a player has enough funds, they can turn in their stills and trucks in favor of running a casino that slings hooch, books acts and rakes in the house’s share. With so many different ways to earn a buck in the core game, it’s another spin of the roulette wheel to keep the action hot! (Mayday Games) by David C. Obenour