BATTLECRUISERS (TMG)
Amidst the chaos of battle, every member of a ship’s crew has a role to play and a time at which to play it. Taking charge of a space battlecruiser, it’s your job to lead this team in outplaying or outlasting your opponents. With a lot of planning for strategy and a little luck for timing, you just may do it too.
For each game of Battlecruiser a set of cards is determined for all players to start with. Players then discard one card from their hand at random face down and put another card at random into the recovery zone face up, with the remaining cards making up each player’s starting hand.
After setup, each turn follows with players selecting a crew member action card. Once every player has selected, the cards are revealed simultaneously and resolved from lowest to highest number. Players who solely selected their crew member take the described action, but players who selected a crew member also selected by another player must resolve the negative “clash” described action. After all cards have been resolved, this turn’s cards are moved to the recovery zone and any cards previously in the recovery zone return to the player’s hand. This continues until only one player remains (having forced the other players out through discarding their entire hand) or until one player reaches 15 victory points.
…and that’s Battlecruisers! 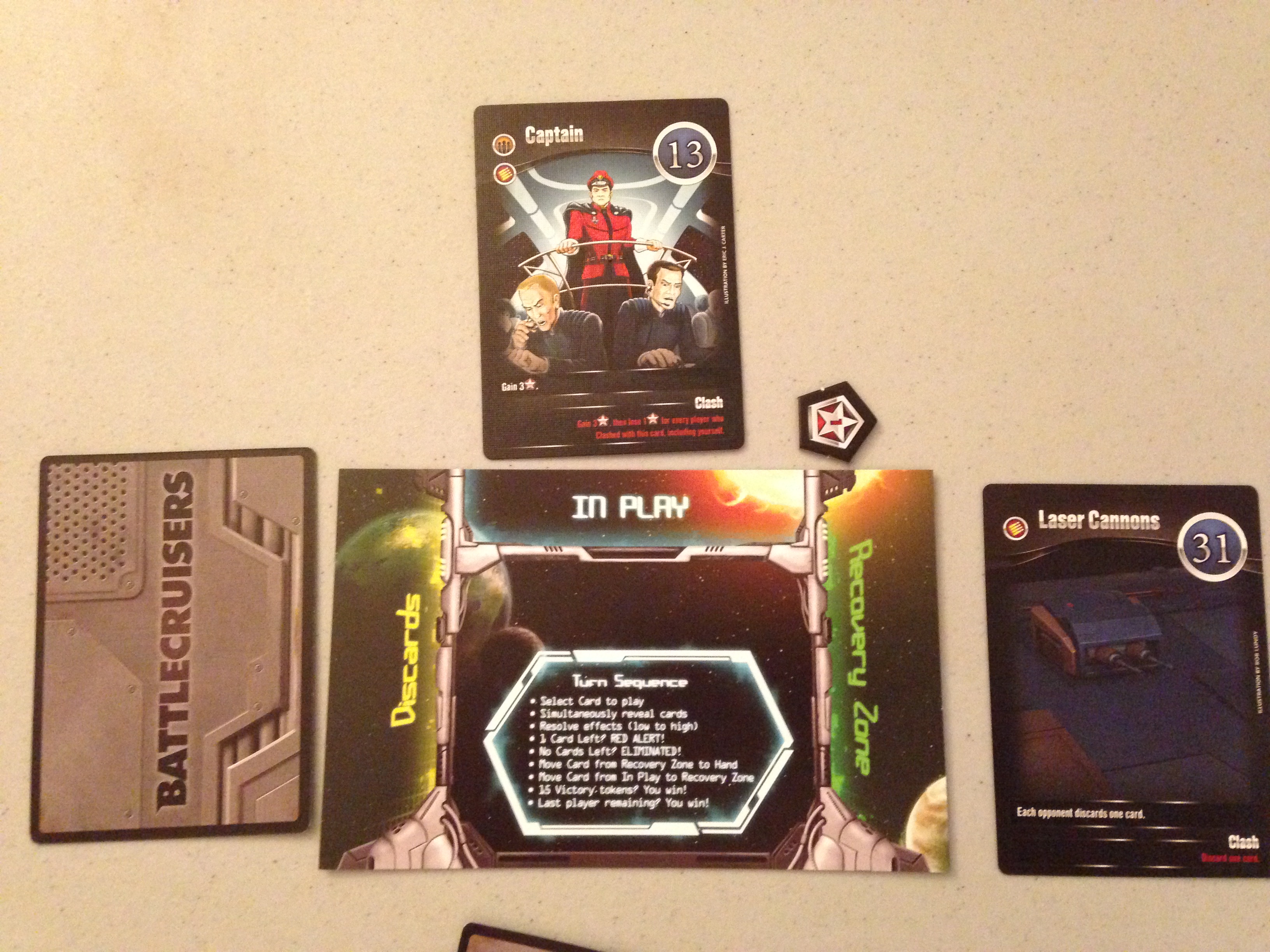 For as much as this is a light, 20 minute, in between game, it has a lot going for it. First, with over 30 cards to choose starting hands from, there’s a ton of replay-ability, similar to that offered by Dominion. The designers went ahead and suggested a number of starting hands that are fun to explore the different mechanics, though players are sure to want to pick their own combinations to amp up different aspects. There’s also the kind of classic card game mechanic of having to figure out what card your opponent is going to play. Far from just a blind bluff, there’s keeping track of which cards were played last round, who’s discarded and what do you think they might have sacrificed, which cards could best help your opponent, and which card would hurt you the least if a clash action were to take place. Finally, each game has two ways to win – do you want to try to destroy your opponents or do you want to be the first to 15 victory points? Some decks are better suited for one way than the other, so your answer might change with each game.
I liked this game after playing it at Origins this year. It was fun, had nice enough art and we had a pleasant group of gamers to learn it with. That said, it did have the feeling of the sort of “inbetween game” that so many games seem to execute all right enough, but usually rather unremarkably so. After playing Battlecruisers a few more times the stigma of being a short-playing card game in a small box fades to reveal a remarkably fun game that’s just similar and different enough to keep you coming back. (TMG) by David C. Obenour