AVALANCHE AT YETI MOUNTAIN (Green Couch Games)
It’s been a rough semester, but the long weekend is finally here and it’s time to go try out those literal jet skis on Yeti Mountain. Why’s it called Yeti Mountain? Don’t be so suspicious, bro! Load up the SUV. It’s time to thrash some tasty powder!
Avalanche on Yeti Mountain is a racing game that pits 1-5 engineering students against each other and the forces of the mountain. 12 mountain cards make up the new-each-game slope and the remaining 48 cards make up players’ starting hands and the draw pile. A speed limit is established based on the number of players and then you’re off!
On each turn, players pick and turn in card(s) to move their skier down the slope. If you’re the fastest one who exceeded the speed limit, you wipe out. If your card matches the color of your slope space, you rocket jump ahead (and speed on the rumbling avalanche behind you). Oh! And there’s also a cranky yeti knocking people down that the player who’s furthest behind gets to control, so don’t get cocky! 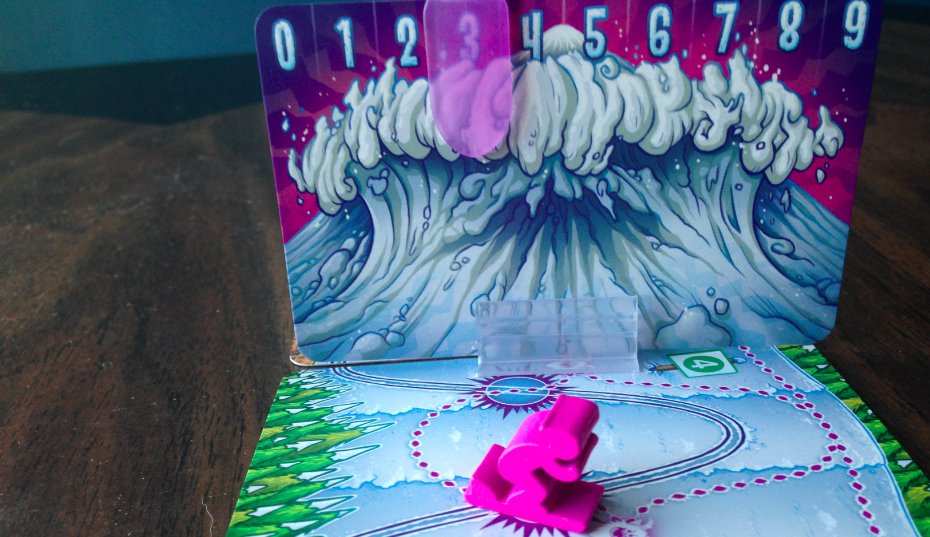 It all makes for an exciting game with just the right amount of luck and decision-making. Rocket jump too often or too early and risk burying the entire party in an avalanche. Hold on to your jumps for too long and risk being left in the trails of your less cautious opponents. If the cards have you down, the addition of the yeti also serves as a nice equalizer. Whatever your fate though, it’s all over in an exhilarating 20 minutes or so. We approve and Ducky Powell does too:

Finally, it’s also worth noting that Green Couch Games bucks a trend in gaming of extra packaging justifying higher prices. There could be other reasons but there’s no denying that throwing a regular-sized deck of cards into a 8.5” x 6.5” x 2” box helps make that leap of, “sure, I’ll pay $25 or $30 for that.” Green Couch Games on the other hand happily fits all of these components into a 5.5” x 4” x 1” for just $15! It’s a great deal on a great game that’s not going to fill your shelf with potato chip-like vacuumus packaging. Good things come in reasonably sized packages. (Green Couch Games) by David C. Obenour