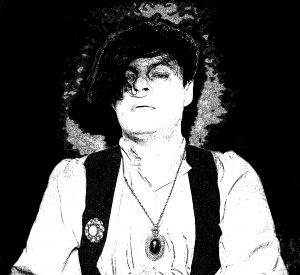 Jack Duckworth is no stranger to the indie scene, and although he doesn’t garner name recognition in many sets, he probably should.  While a resident of Canada, he contributed his considerable efforts to A Luna Red, Primes, and Radio Berlin, and since relocating in England, Duckworth struck out on his own with band Savage Furs, and in 2011 with Soft Riot.  Soft Riot is a solo project producing darkened drones, dread-dripping soundscapes and throbbing electronic rhythms.  With No Longer Stranger, which he offered for free via the internet, Duckworth delivered inspired, albeit creepy, electronic music that still raises the hair on my arms.
On February 24 of this year, Soft Riot’s latest EP, Another Drone In Your Head, was released via Tundra Dubs.  Not only does it deliver more of Duckworth’s striking work, but it also features remixes by electronic music heavies Funerals, Chris Flatline, ?AIMON, Babe Rainbow and William Winslow-Hansen.
Ghettoblaster recently caught up with Duckworth to peek at his top ten list for 2012.  He also sent a Canada-centric mix of synth-pop, new wave and post punk for our enjoyment.  What a good guy.
THE VSS – Nervous Circuits 2xLP Re-Issue
LEBANON HANOVER –Why Not Just Be Solo? LP
LIGHT ASYLUM – Light Asylum LP
DOOMSDAY STUDENT – A Jumper’s Handbook CD
JOHN FOXX AND THE MATHS – Evidence
TAMARYN – Tender New Signs
INNERGAZE – Mutual Dreaming
VARIOUS ARTISTS – Distant Voices Compilation (Other Voices Records)
MARTIJN COMES – Those Who Know Do Not Speak, Those Who Speak Do Not Know
SAVAGES – s/t EP
Here is a mix of Canadian synth-pop/new wave and post-punk from 1978-1986.  Enjoy:
http://softriot.com/2012/12/05/white-lodge-007-canadian-tuxedo