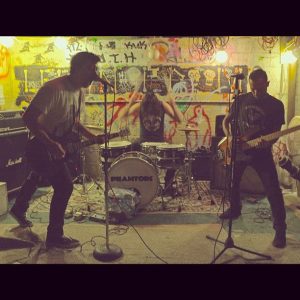 In mid-2009 a duo of musical veterans from Columbus, Ohio, teamed up to form The Black Antler, a return to their metal and hardcore roots.  And considerable roots they had, guitarist/vocalist Adam Lowe, and drummer Alex Weinhardt cut their teeth in a buttload of celebrated indie and underground bands including Six Gallery, The Phantods, Inept, To Dream of Autumn to name a few.  Earlier this year, they added Ryan Moya on bass and began recording their debut, which will see release in early 2013.
Ghettoblaster caught up with Alex Weinhardt to find out what 2012 releases he was listening to while The Black Antler prepared for world domination in 2013.  This is what he was stoked on…
You Won’t – Skeptic Goodbye
If Simon, Garfunkel and Jeff Mangum decide to get married, have 3 kids and move to the part of town where hip parents go instead of the suburbs to raise their children, you’d have Skeptic Goodbye. This album also kind of sounds like a Wes Anderson Film.
Struck By Lightning – True Predition
The pummeling follow up to SBL’s 2009 freshman release Serpents takes the band in a crustier, thrashier direction. Three words come to mind when listening to this album: heavy as fuck.
Dolfish – I’d Rather Disappear than Stay the Same
Cleveland based singer/songwriter Dolfish (Max Sollisch) is probably the nicest human being on the planet. His album is pretty cool too. For fans of Neil Young or Mountain Goats.
Alcest – Les Voyages de L’Âme
If Sigur Ros was a French metal band they would go by the name Alcest.
Joshua P James and the Paper Planes — Please, Please
I’m not a country music fan at all, or at least wasn’t much of one before hearing Please, Please. It doesn’t’ hurt that these guys had a residency at the bar I work at for 6 months or so, but when I got my hands on their record, it didn’t leave my car CD player for about the same amount of time.
Sinkane – Mars
Afro-beat, spacey, psychedelic, electronic….oh, and funky. Really, really funky.
Japandroids — Celebration Rock
The album title pretty much sums up the content.
Converge — All We Love We Leave Behind
These guys have been a band for like 20+ years, and still know how to crush a killer hardcore album. Well done dudes.
Fiona Apple — The Idler Wheel…
This one is kind of the curve ball of the list. I didn’t even know Fiona Apple was still a person let alone releasing new music until my roommate informed me that not only had she put out a new album this year, but that it was really good.
Revere the Curse — Hither & Yon
Ok, so this came out in 2011. I didn’t discover these guys until 2012, so that has to sort of count, right? For fans of Hot Water Music, Small Brown Bike and the Casket Lottery.
The Black Antler’s first release is currently in the mixing/mastering stages. It will be released sometime in early 2013. You can check out our bandcamp page for album updates and preview tracks. http://theblackantler.bandcamp.com/