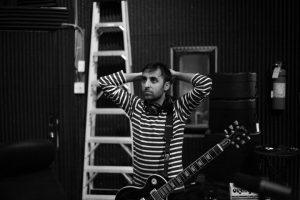 When you have the kind of musical pedigree that Neeraj Kane has, it is safe to say you know a little something, something about a great record.  Kane has played a considerable part in some of the most celebrated heavy rock bands of the last 15+ years, including Holy Fever, The Hope Conspiracy and Suicide File.
Naturally, Ghettoblaster was curious about Kane’s favorite records of the year and he obliged with this list of his faves of 2013.
Top 10 music 2013 …no particular order.
1. Suede (The London Suede) –Bloodsports
2. Johnny Marr- The Messenger
3. Black Rebel Motorcycle Club- Specter at the Feast
4. Bass Drum of Death- self titled
5. Coliseum –Sister Faith
6. My Bloody Valentine-M.B.V.
7. Neko Case –The worse things get the harder I fight, the harder I fight, the more I love you.
8. Weekend- Jinx
9. Youth Code -demo and 7 inch
10.Pearl Jam- Lightning Bolt