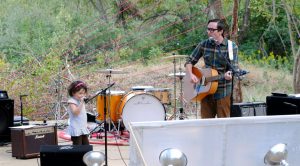 There are certain joys that come with punk parenthood, and Kris N. knows all about them.  In addition to being a long running staple on Dayton, Ohio’s musical landscape, and releasing Thankful Parade via Poptek Records in November, he’s also a father of three.  Naturally, when we asked about his “best of” list for 2013, it included the picks of one of wee his little ones, Wild Tiger.
These are the records that Kris and Wild Tiger told Ghettoblaster they loved this year.
Many times around my house my kids take control the stereo.  So I thought it would be fun to share my top 5 albums of 2013 and the top 5 favorite songs of my five-year-old daughter, AKA Wild Tiger.  She loves to listen to music and loves to sing.  At her young age she already has album credit and has performed with me twice.  Once at a barn show strapped to my back when she was two.  The second was at a festival where we did an amazing version of ‘You are my Sunshine’ and ‘Heart Scarf’ together.  In other words she is a pretty hip five-year-old and has earned the name Wild Tiger.
Wild Tiger’s:
#5: Taylor Swift – “22”
Wild Tiger is still convinced that Taylor Swift sings, “Tonight is a perfect night to dress up like hampsters.”
#4: Seedy Seeds – “My Roots Go Down”
This song did not come out in 2013 but I will allow it because the Seedy Seeds sadly broke up this year.  Wild Tiger has a choreographed dance to this song.
#3: Popstar Princess Barbie – “Here I Am”
I’m not sure what the real words are, but when Wild Tiger sings this song it sounds like she says, “Here I am, burning like a fart.”
#2: Black Keys – “Lonely Boy”
She dances crazy to this.  I think it is the bass drop at the beginning.
#1: “What Does the Fox Say”
I made the mistake of playing this video one time when Wild Tiger was in earshot.  For weeks after she would run around the house saying “ring ding ding da ding da ding.”
Kris N.’s:
#5: Motel Beds – Sunfried Dreams
The rerelease of this record on vinyl came out this year.  Brilliant record and a must have.
#4: The Wonder Years – Greatest Generation
Saw this band at Warped Tour and was blown away.  The record takes me back to better days.
#3: Into it. Over it. – Intersection
Lately, I cannot get enough of this band.
#2: The Story Changes – Static and Trembling
I am not picking this record because these guys are friends of mine, but because this is a truly great record.  Mark and Poppy have dialed it in and I am a fan, friend or not.
#1: Water Liars – Wyoming
The song ‘Linens’ is one of the best songs I have heard in years.
(Visit Kris N. here: http://www.poptek.com/krisn.html.)