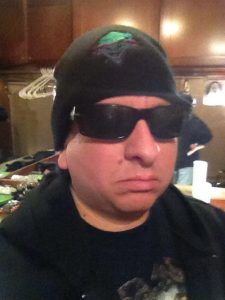 In late 2012, Jason Webber’s natural affinity for costumed, over-the-top acts landed him in league with fans of the clown-makeup wearing rappers of Insane Clown Posse, Violent J and Shaggy 2 Dope.  Shortly after developing a cover story on influential Detroit rapper Danny “K”AE for the Detroit Metro Times, Webber was invited to a job interview with management at Psychopathic Records for the first time. In November 2012, he received and accepted a position as head of public relations for Psychopathic Records.
In short, he’s been the considerable moutpiece behind some of Detroit’s most notorious acts (as well as a former contributor to GBM) for the last calendar year.  As such, Ghettoblaster had to find out what he was rocking in 2013.  This is what lit up his iPod this year…
Nick Cave and the Bad Seeds, Push the Sky Away — Yeah, I know this will be on the list of every NPR-listening, Whole Foods-shopping, PBS-watching hipster with an instamatic camera and a bottle of PBR, but what can I say? Nicky got his groove back with this beautifully understated nugget of despair.
Pet Shop Boys, Electric — I’m totally gay for Neil Tennant and Chris Lowe and I don’t give a damn who knows. This is, quite simply, the best album of electronic music of 2013. Yes, it’s better than the new Moby album and yes it’s waaaaay fucking better than that Daft Punk album, so shut up. No, no, no…shut up! Listen to the song “Love Is a Bourgeois Construct” and see if you don’t agree with me.
Adam Ant, Adam Ant is the BlueBlack Hussar Marrying The Gunnar’s Daughter — OK, so I have a thing for androgynous ’80s rock stars. But Adam’s comeback album proves he’s more than just a dude with eyeliner. He’s also an incredible songwriter who can also crank out of some of the kickiest pop ditties out there. Way to stand and deliver, Adam.
Lady Gaga, Artpop — I know I’ll get lots of flack for choosing this overly produced piece of multimillion dollar corporate rock commerce but it’s still one of the best pop albums of the year. I know the Little Monsters have now mostly grown up and moved on and this album is already considered a flop but it actually contains some of the best stuff her Ladyship has ever written. “Dope” actually made me cry. That may be wussy to admit but there’s nothing wussy about this assured, confident album from one of the few true artists working in pop music. So bite me.
Mazzy Star, Seasons of Your Day — Hope Sandoval and her dream pop minions finally return to deliver more of the sonic, shimmery makeout music for fucked up people that made them so amazing in the ’90s. They haven’t really expanded their sound here but who cares? It still works. “California” is this decade’s “Fade Into You.” It’s great to have them back.
Prince, “Breakfast Can Wait” — Well, this is a single and not an album but screw it–it’s the best baby-making music of 2013. Only the Purple One could deliver such a funky, sexy track that drips and oozes sex like syrup on pancakes. And speaking of which, check out the cover of this single for the biggest music-related laugh you’ll have all year. “Game. Blouses.”
Big Hoodoo, Crystal Skull — This is definitely nepotism, considering that I work for the label that put out Big Hoodoo’s horrorcore debut album “Crystal Skull,” but this is seriously some of the best “wicked shit” you’ll hear all year. This is 100% authentic Detroit horrorcore from the same city that produced Insane Clown Posse, Esham and NATAS. It’s the best audio horror film of the year. Turn down the lights and get scared, bitch!
David Bowie, The Next Day — Just when everyone was wondering where David Bowie had gone off to, he suddenly comes back with a totally-out-of-the-blue album that kicks serious ass. I haven’t had this much fun listening to a Bowie record since 1997’s “Earthling.” Welcome back, old friend.
Zola Jesus, Versions — This woman. Wow. Just…wow. My friend Tim described them as a goth Florence and the Machine and I bought the album based on his recommendation. I’m glad I did because this CD has barely left my car stereo since I bought it. It’s THAT good. And I like them better than Flo and Co. A lot better.
Danny Brown, Old — I freakin’ love this kid. He’s just so goshdarned cute and his spastic Bobcat Goldthwait-style of rapping is just what we need in a day where every rapper continues to try to channel Kanye, Jay-Z or Dr. Dre.