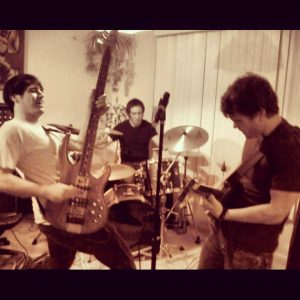 The Helios Choir is a band that is thematic, emotional, and noisy in all the best ways.  With roots in the modern music underground (primarily emo), they create a cacophony of post-hardcore drum beats, distorted, overdriven guitar tones and heart-laid-bare vocals.   In 2012, the band released Songs For Summer, Vol 1, which showcases all of their strengths and wets the appetite for a follow up, which is set to be recorded in February 2014 and released by Summer.
Ghettoblaster recently caught up with THC’s Derrick Nantz to find out which albums he’s been enjoying most in 2013.  Although not all of the records were released in 2013, this is what he’s been digging on this year.
Dikembe – Chicago Bowls (2013 re-release)
The “Gainesville sound” runs strong in this band. Energetic, melodic, upbeat emo with clever lyrics. Be sure to check out Dikembe’s twin band, Wavelets. Their album was top for me in 2012 too.
Caspian – Waking Season (2012)
I first discovered Caspian on Myspace. Yes, Myspace. Ever since, they have been putting out a steady stream of quality instrumental emo-core (as I call it). This album continues the trend. The album opens with one of the best song album introductions I have heard.
The Bronzed Chorus – Gleaning (2012)
I first discovered The Bronzed Chorus at a show in my hometown. I watched dumbstruck as this two piece band created intricate music that most four-piece bands would struggle to replicate. Trance-like sounds from a band that seems to follow in the footsteps of Turning Machine.
Big Awesome –Birdfeeder (2012)
A super-positive melodic band in the vein of American Football, but with a more driving sound. Their music will just make you happy. I can’t get their song “living with love” out of my head and I turn to it every time I am feeling high on life.
The Appleseed Cast – Illumination Ritual (2013)
This is the latest album from a band that has left an indelible mark on the scene. This album has a more mature sound and features less pronounced guitars and vocals than previous releases. It is more ambient and soothing, beautiful even, while still capturing the energy and driving sound the band has always delivered.
Worn in Red – Banshees (2012)
We all fight battles. This is an album I listen to when I am ready for battle. It is serious, intense, and relentless emo-core from Richmond, VA. If Planes Mistaken for Stars and Avail were to produce offspring the result would be Worn in Red. They take the best qualities from these bands and still produce a sound that is entirely original.
The Jealous Sound –A Gentle Reminder (2013 Deluxe Edition)
Clear and concise emo from long-standing members of the scene. The type of band you take your girlfriend to see, but still remained stoked on seeing them. Since Knapsack their music has had a sound that is inimitable. Each album has gained in sophistication while at the same time remaining accessible. Some of the bands best songs are this album.
Maps for Travelers – Change Your Name (2013)
The first full-length from a promising Midwestern band. They seem to take their cues from early Deep Elm Records bands. Vocals and guitar work that is reminiscent of one of my favorite bands, Small Brown Bike.
port-royal – Afraid to Dance (2007)
The perfect music to listen to when you don’t want to listen to music. I don’t know how I missed out on this band. I discovered them only just this year. Serene electronic music to aid in introspection. It will the open door to daydreams. Reminds me of a cross between the ambient moments of Aphex Twin and, more recently, Bitcrush.
Joey Fehrenbach – Losing You (2012)
Without making light of the quality of this album, I must say that if robots were to become sentient and develop their own version of emo music, this is what it would sound like. Atmospheric electronic music for a post-industrial world – and yet it is wonderfully hopeful and uplifting! It is spiritual in a decidedly non-supernatural sense. “Indigo Road” is one of the most emotionally layered songs I have heard.
(Visit Derek’s band here: https://www.facebook.com/thehelioschoir.)