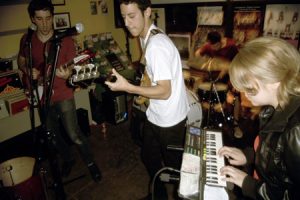 Los Angeles’ Shark Toys are the kind of young upstarts who are poised to capture the hearts and ears of indie rockers the world over.  The punk upstarts have crafted a sound directly descended from The Urinals, but their catchy, off-kilter songwriting also pushes the L.A. indie sound into new territory with zippy toy keyboards and wild, skronky guitars.  As unhinged as Coachwips, and with a wackiness that harkens to the Flying Nun scene, their self-titled LP (recorded and mixed by Monty Buckles of The Lamps) is a clanging, rock and roll romp you shouldn’t miss.
Ghettoblaster recently caught up with Shark Toys’ Daniel Clodfelter to get a peek at some of his favorite records of the year.  In alphabetical order, here they are:
1. Devo – Hardcore Devo (reissue)
2. Foxygen – We Are the 21st Century Ambassadors of Peace and Magic
3. Joanna Gruesome – Weird Sister
4. Oblivians – Desperation
5. Plateaus – Wasting Time
6. Smelly Tongues – Slack Heap
7. Terry Malts – Nobody Realizes This Is Nowhere
8. the Urinals – Negative Capability (reissue)
9. Woollen Men – s/t
10. V/A – Je Suis Punk
(Visit Ian and the band here: https://www.facebook.com/sharktoys.)