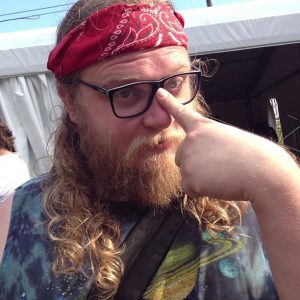 At one time, Columbus Ohio’s Brainbow was the city’s premiere post-rock, instrumental band.  The group delivered slow-moving, acid-damaged guitar jams and wordless psychedelia that split the difference between Syd Barrett-era Pink Floyd, Earth, and Explosions In The Sky. Though they’d been basically non-functioning for two years, the band finally unveiled a gargantuan second album II on double vinyl in January.
Ghettoblaster recently caught up with guitarist Chris Worth to discuss other records that kept him occupied in 2013.  This is what he listened to.
In alphabetical order:
Top 10 from 2013:
Boduf Songs – Burnt Up on Re-Entry
Like “The Downward Spiral”, except I like it.
Connections – Body Language
Hometown homeboys spit out their second delicious chunk of rough-hewn, burnt-edged, scummy pop-rock in 12 months.
Ian William Craig – A Forgetting Place
This record, the single prettiest one I heard all year, is remarkably light for all its decay, and only reveals itself if you give it the attention it deserves.
Eye – Second Sight
Legit dudes who are making the some of the finest prog / psych of the last 25 years.
Ghostface Killah & Adrian Younge – 12 Reasons to Die
This is exactly what hip hop would have sounded like in 1979, if it had originated in the ‘60s instead — aping Sun Ra, Goblin, Afrika Bambaataa, and the requisite blaxploitation marital arts soundtracks to sound more retroafrofuturist than anything Yeezy’s done in the last 5 years.
Gorguts – Colored Sands
Luc Lemay poached the best dudes in the biz and came up with something monstrous, dissonant, crushing, haunting, and unlike anything else.
Lychgate – Lychgate
One of the more unique black metal releases of the last several years (which is saying something), it doesn’t sound a whole lot like anything else, except maybe getting lost in an ancient haunted labyrinth.
Melt-Banana – Fetch
Unquestionably my favorite record of the year that I can’t stand the production on, it’s a polished, glitchy, psych-punk rainbow.
Gabriel Saloman – Soldier’s Requiem
Losing Yellow Swans was a big blow, but Saloman has refined and focused his impulses into a poignant, harrowing meditation on the psychology and reality of war.
Wolvserpent – Perigaea Antahkarana
Ambitious in scope and successful in its plodding execution, this chunk of blackened orchestral sludge is far cry from what I imagine would have been produced a band which once sported the unfortunate moniker “Pussygutt”.