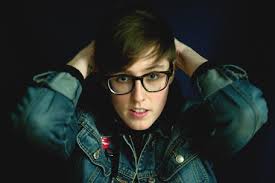 Brooklyn based indie-rock artist Allison Weiss, a former back-up singer for Lou Reed (RIP), who has been making serious waves with her emotional, pop-infused rock, is set to release Say What You Mean (Sideways Sessions) on November 26 via No Sleep Records.  This tops off a successful year for Weiss who spent the Summer making new fans on the Vans Warped Tour, and who will head out with Austin Lucas before the end of 2013.  The upcoming record is a re-imagining/acoustic version of Allison’s critically heralded album, Say What You Mean, that was released in April.
Ghettoblaster recently caught up with Weiss to discuss her five favorite albums of the year.  This is what she was digging on.
Tegan & Sara – Heartthrob
Dance away all your sadness! Another great pop album from one of my favorite bands.
Chvrches – The Bones of What You Believe
New album, new band, 100% refreshing. I could listen a hundred times in a row.
Sombear – Love You In the Dark
Brad Hale from Now,Now just happens to be a sick indie-electro-pop/R&B producer and songwriter. Who knew. This album is beautiful.
Kevin Devine – Bulldozer
Undeniable catchiness from another favorite of mine, and the product of an epic Kickstarter campaign. Respect.
The Postal Service  – Give Up
One of the best albums of all time, rereleased this year, so technically it counts, right?
Catch her at one of these dates: