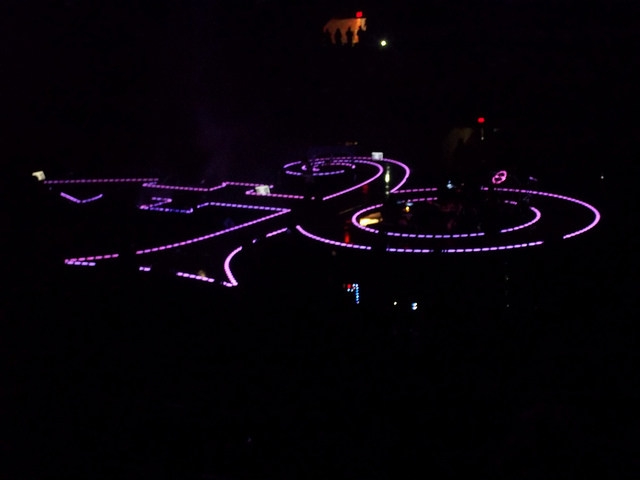 Prince brought politics, playfulness and, of course, a lot of purple to a sold-out Madison Square Garden on December 18, 2010.  His laundry list of hits, stage presence, incredible musicianship and ability to unite a diverse collection of fans (including a variety of celebrities who stormed the stage during the finale) make him a contender for the last, true rock star.
Comedian Sinbad, who opened and emceed the concert, prefaced the artist’s performance for the young people in attendance.  “Your generation will not do this.”
In fact, it is difficult to name a present-day artist who will match Prince’s 30-plus years on the scene and genre-spanning music which includes timeless songs such as “Purple Rain.”  In an era of pre-recorded vocals and computerized beats, Prince sang live standing, dancing, laying on top of his piano and playing several instruments during masterful solos or together with his talented New Power Generation band members.  Featured performances by John Blackwell on drums and Renato Neto on keyboards were extremely memorable.
Another featured artist, the legendary bassist Larry Graham of Graham Central Station and Sly and the Family Stone, played a lively set at the top of the concert.  After Prince emerged to join Graham for Sly Stone classics “Everyday People” and “Higher,” the audience was treated to video footage from what appeared to be the 1960s and 1970s—including clips of Martin Luther King, Jr. and Jesse Jackson—and soul music recordings during a brief intermission.
The political themes did not end there.  Before Prince began his set, he delivered an off-stage monologue, referencing race relations and 9/11.  He also mentioned the recent, controversial changes to airport security.
“Remember who you elected,” he said.
Additionally, Prince criticized the education system, expressing that teachers conceal half of everything they know “to keep you not free.”  He moved on to address the entertainment industry.
“Everybody ain’t a star.  Nobody is on the cover of Rolling Stone.  The biggest star in the world is dead.”
After the serious conjecture, Prince dove into the lighthearted hit, “Baby I’m a Star.”  Then, he shared the stage with a ballerina for a soul-wrenching rendition of “The Beautiful Ones.”  Next, he tore through “Let’s Go Crazy,” “Delirious” and “1999” and engaged the crowd in dances and chants.
“Too many hits!” he shouted.
Prince demonstrated the extent of his smash songs by continuing with “Uptown,” “Raspberry Beret,” “Cream” and “Let’s Work.”  The only lesser-known song that he played was “Shhh,” but his virtuosic guitar solo made it one of the night’s stand-out performances.  Prince also took a break from his catalogue to play The Time’s “Cool.”
Another highlight was Sheila E’s duet with Prince on “You Got the Look” and her exceptional drumming on her hit song, “The Glamorous Life.”
After a passionate performance of “Nothing Compares to You” with Shelby J., Prince closed the show with an extended, heartfelt version of “Purple Rain.”  After thunderous applause and ear-splitting screams, Prince re-emerged for his first encore.  Dressed in all red, he showed off energetic dance moves during “Kiss.”  Then, during “A Love Bizarre,” he invited a bevy of celebrities on to the stage, which was in the shape of his trademark symbol.  Everyone from Alicia Keys and Jamie Foxx to Spike Lee and Whoopi Goldberg danced alongside the artist.
At Prince’s command, the audience members lifted up their cell phones and created a sea of sparkling lights across the arena.  Prince’s magic shines on several generations, and his music will live on way beyond the day that he stops performing.  Welcome to America, where Prince is the last rock star standing.
Photo by moniquewingard, used under a Creative Commons license.