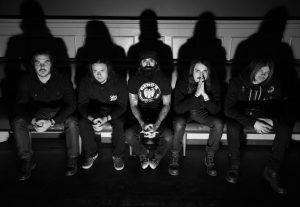 No single band is as central to New York’s current heavy music scene as White Widows Pact. Frontman David Castillo is co-owner of Saint Vitus Bar, the city’s undisputed home base for live metal and hardcore. In a few short years, Saint Vitus Bar has established itself as the premier curator of local bands and as a top destination for touring acts, some of them legendary – Refused and a reunited Nirvana are two recent visitors to its tiny stage. Castillo also fronts Primitive Weapons, the Brooklyn band recently signed to The Dillinger Escape Plan’s label, Party Smasher Inc.
The other four members of White Widows Pact – guitarists Travis Bacon and Nick Emde, bassist Brian Ponto, and drummer Kenny Appell – are equally entrenched in the city’s scene, doing time in outfits like Grudges, Cleanteeth, and Goes Cube.
With True Will, White Widows Pact does its hometown proud. Named one of 2015’s “100 Bands You Need to Know” by Alternative Press earlier this year, White Widows Pact now officially earns that title. On True Will, New York hardcore, ’90s death metal, and Southern sludge unite in a storm of grooving power that nods to Madball, Obituary, and Crowbar. A wall of strings, a machine of a drummer, and frontman Castillo in maniac-mode – White Widows Pact owns a sound that recalls the glory days of Earache and Roadrunner, as well as the glory days of New York City, boosted by present-day hardcore energy and lyrics which plumb the existential depths of urban life.
True Will was recorded and mixed at The Wild Arctic in Portsmouth, New Hampshire with Dean Baltulonis (Sick of It All, Modern Life Is War) and mastered by Brad Boatright (Nails, High on Fire). The album follows a self-titled debut EP, released by Saint Vitus Bar’s own label, Sacrament Records, with the vinyl released by Panic Records. Guest appearances on True Will include: Sara Taylor of Youth Code, Liam Cormier of Cancer Bats, Aaron Heinold of Hivesmasher, and Leech of Theologian. The album’s art is a collaboration between tattoo artist Dan Bones and photographer Meg Wachter.
Ghettoblaster recently caught up with the band’s Travis Bacon to get some insight about their homebase. This is what he had to say about Nothing Changes at Home Sweet Home Bar, Heaven Street Records, seeing Tragedy at ABC No Rio, and the cheeseburgers at Anchored Inn.
What’s your town’s nickname?
The Big Apple.
Why do you live there?
I grew up here and it’s the greatest city in earth. I lived in Olympia, Washington, for four years. Made some great friends, but I can’t fuck with that anymore.
What’s the weirdest thing that has ever happened to you there?
911 honestly…
What is your favorite local attraction (monument, park, etc)?
I still get excited to go to the Natural History Museum.
What is your favorite local event or festival?
Nothing Changes, a weekly goth/dark wave/post punk/industrial/noise night at Home Sweet Home Bar in the Lower East Side every Wednesday at 10 PM. Check it out if you’re in town. I also enjoy the Powder Room, you’ll have to look into that for yourself.
What is the best time of year to be there?
Fall. Walk around any park and look at the leaves changing.
Who is your favorite local celebrity?
Fireball Fred.
Where is the best place to drink and what’s their specialty or happy hour?
Over The Eight Happy Hour. Best bloodys in town, courtesy of our guitar player Nick Emde.
Who has the best jukebox (and what’s in it)?
Not many bars rock jukeboxes anymore. I guess I’d have to say Duff’s Bar in Williamsburg (anything from Type O Negative to Behemoth, free on Sundays) and The Leeve, also in Williamsburg.
Do you play music there? If so, where is your favorite place to play?
Saint Vitus, The Acheron and ABC No Rio.
Does where you live influence your music?
Absolutely. If I had to geographically describe our sound I would say it’s 30 percent New York, 30 percent Southern, 20 percent Swedish and 20 percent Floridian.
What is your favorite place to see live music and what was your favorite show there?
ABC No Rio. I saw Tragedy there when I was 13 and it changed my life.
What is your favorite local band?
At the moment, Statiqbloom, Belus, Black Black Black and Incendiary.
What is your favorite diner or restaurant and what is their best dish?
Anchored Inn cheeseburger.
What is your favorite record store and what was your best find there?
Heaven Street. I found a used copy of Skinny Puppy – Cleanse Fold Manipulate and was quite siked.
What is your favorite local publication (alternative weekly, zine, website or blog)?
Invisible Oranges, Metal Sucks, Nutz.
What is your favorite local shop?
Civil Service Cafe in Bed Stuy down the street from my place. I stop there every morning for coffee.
If you could live anywhere else, where would that be?
Berlin.
(Visit White Widows Pact here: https://www.facebook.com/WhiteWidowsPact/.)